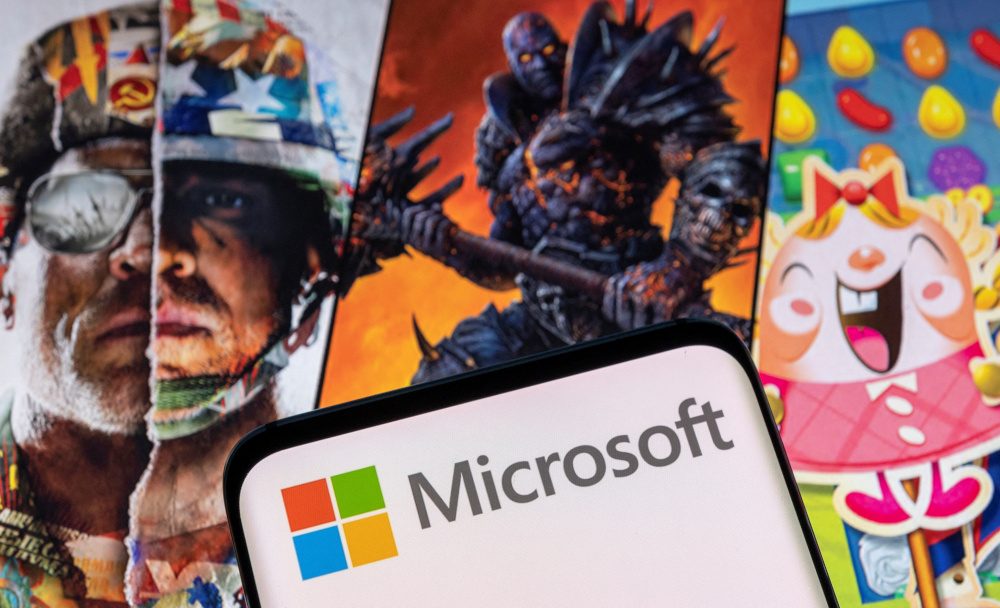 MICROSOFT AND ACTIVISION BLIZZARD. The Microsoft logo is seen on a smartphone placed on displayed Activision Blizzard's games characters in this illustration taken January 18, 2022.

Facebook Twitter Copy URL
Copied
'Gaming is the most dynamic and exciting category in entertainment across all platforms today and will play a key role in the development of metaverse platforms,' Microsoft Chief Executive Satya Nadella says

Microsoft is buying Call of Duty maker Activision Blizzard for $68.7 billion in the biggest gaming industry deal in history as global technology giants stake their claims to a virtual future.

The deal announced by Microsoft on Tuesday, January 18, its biggest-ever and set to be the largest all-cash acquisition on record, will bolster its firepower in the booming videogaming market where it takes on leaders Tencent and Sony.

It also represents the American multinational’s bet on the “metaverse,” virtual online worlds where people can work, play and socialize, as many of its biggest competitors are already doing.

“Gaming is the most dynamic and exciting category in entertainment across all platforms today and will play a key role in the development of metaverse platforms,” Microsoft Chief Executive Satya Nadella said.

Microsoft, one of the biggest companies in the world largely thanks to corporate software such as its Azure cloud computing platform and Outlook franchise, is offering $95 per share – a 45% premium to Activision’s Friday close.

Activision’s shares were last up 26% at $82.10, still a steep discount to the offer price, reflecting concerns the deal could get stuck in regulators’ crosshairs.

Microsoft has so far avoided the type of scrutiny faced by Google and Facebook but this deal, which would make it the world’s third largest gaming company, will put the Xbox maker on lawmakers’ radars, said Andre Barlow of the law firm Doyle, Barlow & Mazard PLLC.

“Microsoft is already big in gaming,” he said.

However, a source familiar with the matter said Microsoft would pay a $3 billion break-fee if the deal falls through, suggesting it is confident of winning antitrust approval.

The tech major’s shares were last down 1.9%.

The deal comes at a time of weakness for Activision, maker of games such as Overwatch and Candy Crush. Before the deal was announced, its shares had slumped more than 37% since reaching a record high last year, hit by allegations of sexual harassment of employees and misconduct by several top managers.

The company is still addressing those allegations and said on Monday it had fired or pushed out more than three dozen employees and disciplined another 40 since July.

CEO Bobby Kotick, who said Microsoft approached him about a possible buyout, would continue as CEO of Activision following the deal, although he is expected to leave after it closes, a source familiar with the plans said.

In a conference call with analysts, Microsoft boss Nadella did not directly refer to the scandal but talked about the importance of culture in the company.

“It’s critical for Activision Blizzard to drive forward on its renewed cultural commitments,” he said, adding “the success of this acquisition will depend on it.”

Data analytics firm Newzoo estimates the global gaming market generated $180.3 billion of revenues in 2021, and expects that to grow to $218.8 billion by 2024.

Microsoft already has a significant beachhead in the sector as one of the big three console makers. It has been making investments including buying “Minecraft” maker Mojang Studios and Zenimax in multibillion-dollar deals in recent years.

It has also launched a popular cloud gaming service, which has more than 25 million subscribers.

According to Newzoo, Microsoft’s gaming market share was 6.5% in 2020 and adding Activision would have taken it to 10.7%.

Executives talked up Activision’s 400 million monthly active users as one major attraction to the deal and how vital these communities could play in Microsoft’s various metaverse plays.

Activision’s library of games could give Microsoft’s Xbox gaming platform an edge over Sony’s Playstation, which has for years enjoyed a more steady stream of exclusive games.

“The likes of Netflix have already said they’d like to foray into gaming themselves, but Microsoft has come out swinging with today’s rather generous offer,” said Sophie Lund-Yates, equity analyst at Hargreaves Lansdown.

According to Refinitiv data, the Microsoft-Activision deal would be the largest all-cash acquisition on record, trumping Bayer’s $63.9 billion offer for Monsanto in 2016 and the $60.4 billion that InBev bid for Anheuser-Busch in 2008.

Tech companies from Microsoft to Nvidia have placed big bets on the so-called metaverse, with the buzz around it intensifying late last year after Facebook renamed itself as Meta Platforms to reflect its focus on its virtual reality business.

“This is a significant deal for the consumer side of the business and more importantly, Microsoft acquiring Activision really starts the metaverse arms race,” David Wagner, equity analyst and portfolio manager at Aptus Capital Advisors said.

“We believe the deal will get done,” he said, but cautioned: “This will get a lot of looks from a regulatory standpoint.” – Rappler.com

Get budget-priced gaming gear from Shopee using these voucher codes!