The Duterte administration continues to pursue neoliberal policies. Its flagship health plan, the Philippine Health Agenda or ACHIEVE, is a sham, having failed to address the health needs of the people and create substantial changes in the Department of Health’s (DOH) policies and programs.

Through the Philippine Health Agenda, the Duterte administration continues to implement policies and programs like privatization/corporatization of public hospitals, budget cut on direct health services, and fee for service.

With this, the Duterte government, like the previous administrations, abandons its responsibility of providing health services to the people and surrenders its obligation to private businesses, whose interest is to gain profit.

Various health groups proposed People’s Health Agenda to the Duterte administration to make health services accessible to the Filipino people, but the government, however, was lukewarm in its response, largely ignoring the proposal.

The government’s inability to provide adequately for the health of its people can be cited in the following:

The TSEK AP program or free medical consultation for 20 million Filipinos did not materialize.

Under his first year, no additional Barangay Health Stations (BHS) were put up. Take note that at least 26,000 barangays do not have BHS, depriving thousands of people of accessible, preventive, promotive health services. Many existing BHS are also dilapidated, lack personnel, equipment and medicine (i.e. areas in Western Samar). Some are occupied by military in different parts of the country.

Primary health services are also concentrated in urban centers while rural communities have very little or no health facilities at all. There is also a lack or absence of preventive and promotive aspects of health like immunization services such as anti-tetanus, Hepa-B.

The DOH itself admits the government’s failure to eliminate measles.

Aside from this, DOH also confirmed the sale of National Center for Mental Health (NCMH)/Welfareville and its planned transfer to Rosario, Cavite. The modernization of Philippine Orthopedic Center also lacks funding.

The budget for the maintenance and other operating expenses (MOOE) of public hospitals remains inadequate.  With this, patients will be charged of higher hospital, laboratory, and other fees.

The plan to transfer and to eventually corporatize Dr. Jose Fabella Memorial Hospital is expected to deprive poor patients of affordable women, maternal and child health care. The call to improve present structures and develop facilities with government funding continues. Although President Duterte promised to modernize the Fabella hospital, no written policies have been made.

Secondary level of care such as district, city, or municipal hospitals lack necessary equipment, facilities, medicines and qualified personnel.  Not all municipalities also have government hospital.

Because of these inadequacies at the primary and secondary level, patients from far-flung areas have to go to tertiary hospitals located in urban centers for their health needs.

This situation requires the patients and family to travel, which is way beyond the financial capacity of the poor from remote areas.

The health budget allocated for the year 2017 is not commensurate to the needs of Filipinos and still far from the 5% of the Gross Domestic Product standard.

Budget for maintenance and other operating expenses (MOOE) for government hospitals and facilities remain low.  The proposed budget for MOOE in the 2017 National Expenditure Program was cut by P1.5 billion ($29.54 million) from the 2016 budget.   But due to combined efforts of the health sector, community organizations, and the Makabayan bloc to push for increased health budget, the allotment for MOOE to its 2016 level was restored in the General Appropriation Act.

PhilHealth is a form of user-fee that makes people pay for services. With the cap in benefit package and lack of medicines, supplies and procedures in public health facilities, even poor patients under No Balance Billing (NBB) are forced to spend out of their pockets – only 4 of 10 claims were covered in the NBB.

Philhealth is used as a profit-making avenue for private institutions that pushe patients to shell out out-of-pocket expenses. Philhealth is largely subsidized by taxpayers’ money. Billions of pesos worth of subsidy – P37.5 billion ($738 million) in 2015, P43 billion ($847 million) in 2016 and P53 billion ($1.043 billion) for 2017 – were given to Philhealth. Despite this, the utilization remains low among the lowest quintile (33%) or the poor.  Even with increased subsidy for Philhealth, out-of-pocket-expenses in health reach as high as 53% of the total expenses.

Aside from this, the health department failed to add plantilla positions for health personnel even if health facilities expanded its coverage and services.

Benefits under the Magna Carta of Public Health Workers were not regularly given due to lack of funding. Health workers under the local government also did not receive benefits such as hazard pay, overtime pay, and other benefits provided by law.

Poor working conditions of health personnel continue, with many of them being overworked.  For example,  first year residents of the Department of Emergency Medicine Services (DEMS)  of the Philippine General Hospital  (PGH) resigned due to poor working conditions. According to them, nurses  extended up to two and more working hours without pay.

Consequently, because of this, many health personnel choose to leave the Philippines for better opportunites abroad.

Cheaper Medicines Act did not decrease the prices of medicines and did not dismantle drug monopoly that controls prices and distribution.

Although the Department of Social Welfare and Development (DSWD) allocated funding for medicines under their Lingap sa Masa program, it is very difficult to access and funds are available to few hospitals only.   For example in PGH, P480 million ($9.48 million) from DSWD and additional P100 million ($1.96 million) per month from Presidential Social Fund (PSF) are allocated for medicines. However, these funds are not maximized by the people who need them most because of barriers that makes access to medicines difficult, including lack of health personnel like doctors and social workers to assess and endorse patients, operational inefficiency and cap on the number of patients to be served,  proof of indigency and others requirements.

There is no allocation for this in the General Appropriations Act. 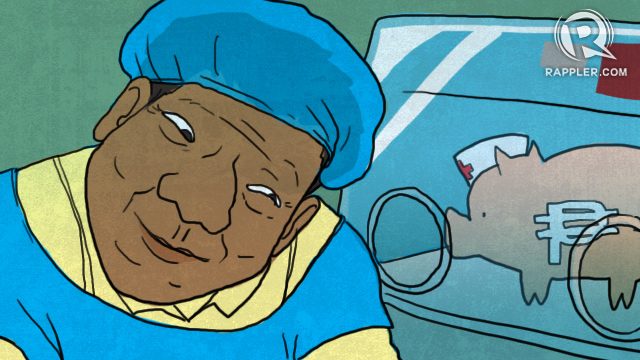 Despite a law increasing the penalty for hospitals that violate the “Anti-Hospital Deposit” policy, hospitals still ask for deposit especially for private patients.

According to Food and Nutrition Research Institute (FNRI) the number of malnourished children has increased, and the government nutrition program is still inadequate.  DSWD feeding program is selective and provides only P15 per child ($0.30).

In summary, the Philippine Health Agenda of the Duterte government promotes the increasing role of the private sector, privatization/corporatization and insurance like Philhealth to finance public health facilities with the end goal of less or no subsidy from the government.

The government has the primary responsibility in ensuring people’s right to health.  It should provide adequate fund allotment and implement measures to improve public health care delivery and people’s health.  Taxes should be returned to the people in the form of adequate and free social services.

Improvements in the health situation of the people could be achieved if the government has the political will to prioritize social services  and free the people from hunger and poverty by implementing genuine agrarian reform and nationalist industrialization.

The key to free, comprehensive and progressive or people-centered health care system thus lie on the people’s concerted efforts to push for meaningful changes towards a just and healthy society. –Rappler.com

Eleanor A. Jara, M.D., is the current executive director of the Council for Health and Development, secretariat of over 70 Community-Based Health Programs in the Philippines, and is now the spokesperson of the Coalition for People’s Right to Health. She is part of UP College of Medicine, Class of 1976, took her residency in Community Pediatrics at the UP-PGH Medical Center from 1979-1980, and taught Community Medicine to UP medical students at the Comprehensive Community Health Program in Bay, Laguna from 1977-1983