The golden medallion of the Order of the National Artists, with its intricate chain bearing baybayin, has become the rope for F. Sionil Jose’s guillotine.

A National Artist for Literature, Jose has lost the sound mind, the true heart, and even the intuition and control of a good author. He is already old — a nonagenarian author, akin to the well-regarded Milan Kundera. But unlike Kundera, Jose is still spilling oily opinions, refusing to calm down, and has become a prominent enabler of what the Norwegian Nobel Committee called “the murderous anti-drug campaign” that was Duterte’s flagship project.

How could a National Artist stoop this low? In the literary community, Jose has also become a laughingstock for his cluelessness of the Philippines’ rich and diverse multilingual literature. In a video uploaded by the novelist and teacher Edgar Samar on his Youtube channel, it was revealed that Jose did not like any contemporary Filipino literature other than those written in English. He doesn’t read Tagalog novels, and worse, he, an Ilokano, said: “I don’t even read Ilokano literature anymore.” For a novelist who exploited the Ilokano identity in his novels, there is nothing more despicable than this. 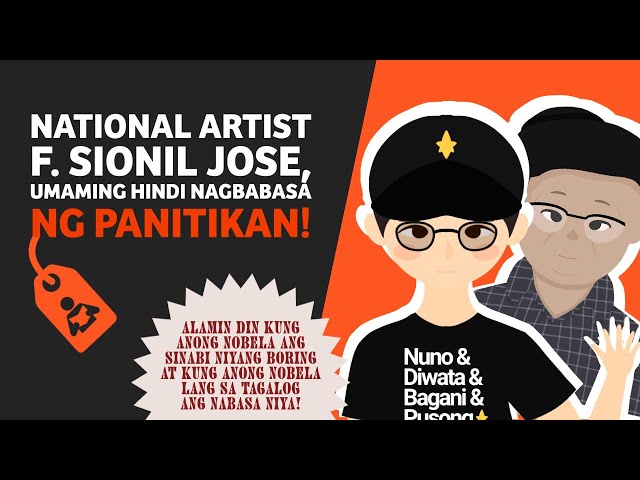 Neither can one forget his racist remarks towards the Filipino Chinese community, his problematic portrayal of women in his novels, and his cringey rockstar vibes in his newspaper column, throwing here and there inaccurate facts and wrong analyses about many situations regarding literature and life in the Philippines.

[OPINION] To F Sionil Jose: Yes, nations die, but not for the reasons you think Reacting on Facebook to the Nobel Peace Price win of Maria Ressa, Jose showed that he was out of touch with the Philippine press freedom situation. He complacently said that President Rodrigo Duterte did not inflict damage on or control the press, though he did admit that Duterte influenced the closure and non-renewal of ABS-CBN’s franchise to operate. This lack of compassion and tolerance for the strongman is alarming.

“Sure, journalists have been killed in the Duterte regime just as it was in past administrations. But those killings cannot be laid at Duterte’s door. Usually, they are made by minor politicians or officials attacked by journalists.”

He further intoned that only in the time of the Marcos regime was press freedom attacked. And this is a problem: the comparing of administrations has become the moral measurement for many Filipinos. But history is not only contained in the past.

(Many commented on his post, like journalist Howie Severino, who made everyone laugh when he said Jose was nowhere close to Ressa, and said that the dialogue in Jose’s novels were “stilted” and “unrealistic.” This is probable — Vibora by Jose was the worst Filipino novel ever written. I can still recall how pretentiously patriotic the main characters were, the incoherent structure, and the imbalances in the plot.)

This is why Jose is not a true journalist — he didn’t know the worth of Ressa’s win, and he didn’t have a clue about the freedom that was being curtailed. Journalism is not literature, yes, but one must not forget that our literary tradition was molded from the works of journalists — Jose Rizal, Marcelo H. del Pilar, Carlos P. Romulo, and Nick Joaquin (who I believed should have been the first bet for the Nobel Prize in Literature).

As a Filipino writer, Jose’s legacy is irreparable. And this issue will still be discussed even after all the fighting. As Pound once said, “Literature is news that stays news.” – Rappler.com

Ramzzi Fariñas is a poet and pioneering member of The Time of Assassins Literary Guild. He is currently taking his MA in Philosophy at University of the Philippines Diliman.