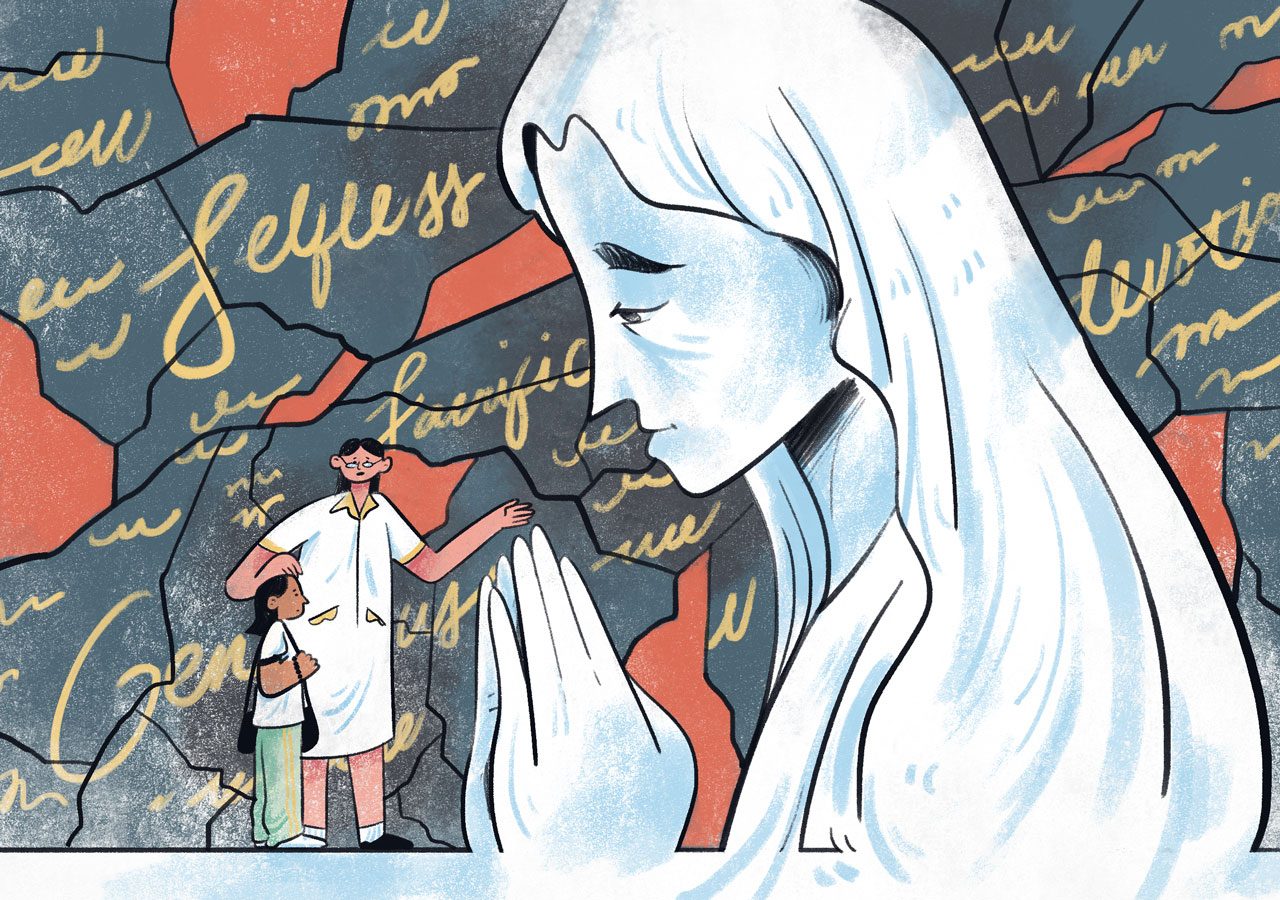 Facebook Twitter Copy URL
Copied
'When child care fails, why is the blame placed on the mother, and not the society that contributes to the quality of life?'

As a young girl, I was taught the importance of the mother figure.

More specifically, the devotion of the mother figure: the woman of the home, the ilaw ng tahanan. Her value was often rooted in her generosity, her compassion, her resilient ways.

Mothers, as I was taught, had the unwavering skill of sacrifice. We threw around that word so much without batting an eye.

I studied in an all-girls Catholic school. Mary was often brought up in our religion classes, being the most venerated woman of Christianity as the mother of Jesus Christ. She was the epitome of womanhood in our eyes, accepting God’s call with such grace. We know her story to be one of a mother’s wholehearted dedication, her identity as the Mother, so much so we call her Mother Mary in our prayers.

She was also 13 when she officially began this journey. In saying yes to becoming the Messiah’s mother, she sacrificed not just her body, but her girlhood as well. Then there was the home. I was raised in a nuclear family structure of two parents — one mother, one father — and us kids. From early on, Mother’s Day cards always had words such as generous, selfless, sacrifice, and so on. Though both my parents had an equal hand in raising me, it was always expected that the one making the time for us was my mother. We would ask for her when we needed something. After her work in the office, she would have her work at home. She often doubted about having days to herself, apprehensive to leave us alone in the house.

I did not think much about this when I was younger. Now I am in my early 20s, and I wonder about this idea of motherhood. I wonder if women are really meant to give up that much, and why we have made it this way.

What a mother should be, as dictated by others

I remember the mothers I’ve seen in movies when I was younger. Like many, I was a Disney and Pixar child. I was raised partly by the Disney princesses, the Disney channel stars, and the Pixar heroes.

Helen Parr of the Incredibles is one of the Disney moms I remember the most. She was just what we knew mothers to be: a heavy-duty, resourceful, supportive homemaker. She is, in all senses of the word, a supermom. Between her and Bob Parr she is the one who finds fulfillment in family life, actively carrying out her duties as Mrs. Incredible by tending to the home and caring for the family.

We, as audiences, felt that was just the role she was meant to play. Only 14 years later with the release of Incredibles 2, we see her free to rediscover a lost part of her identity as Elastagirl, switching places with her husband.

Certainly, her fulfillment from either role is completely valid: she loved being a mother as much as she loved being a superhero. Both are choices she made, which makes it heartwarming to see. But what about those women who never had the chance to choose?

Now, I think about Nani Pelekai of Lilo and Stitch, who was forced to play the mother so early on in her life.

She struck a chord with me even when I was younger, perhaps because I am also an older sister, but also because I found it unbelievable the process she had to go through in order to keep Lilo. My heart wrenched at her anxiety about not being a perfect guardian. Surely it was a huge responsibility to take care of a six-year-old girl, but it always felt as if the blame was on her for not being a good mother substitute.

She toiled in several jobs and handled a rambunctious little sister (and alien dog), all while keeping herself together. At every turn, she was scrutinized for what she could not do and could not be, and the only individual who really extended her any substantial support was David, her boyfriend — and even then she struggled to make ends meet.

It felt as if everything was going against her, and because of her flaws in playing a maternal figure, she would lose her sister, who meant the world to her.

I looked it up: Nani was only 19. I ponder upon her lost girlhood in the process of everything that happened.

We loved her for being so determined despite the obstacles. We praised her for going above and beyond for her sister, especially in the end, when she would eventually demand help in rescuing Lilo. Her strength was a feat of insane will.

It all ends happily in Disney fashion, of course. Still, I had always wondered what would have happened if she had been supported more, if she was assured of help right from the beginning, if things had not gone far enough that Lilo would have to run away.

I’m sure the story would have turned out very differently.

Were her sacrifices a courageous story of maternal devotion, or a tragic indication of how much we unfairly expect of women?

What are we telling the young girls who see these stories?

I am skeptical of the sentimentalization of a mother’s devotion. Certainly, it is worthy of praise, but when it becomes a tool to subject women to work beyond what they can carry, then I argue we should be raising more questions rather than glorifying sacrifice blindly.

Why do women need to bear the brunt of such heavy expectations? When child care fails, why is the blame placed on the mother, and not the society that contributes to the quality of life? Is the idea of overly-devotional motherhood really a sacred duty, or is it a socio-cultural tool of subjugation, a way of diverting the attention from issues of health, policy, and human rights? What I am hurt by, as a woman, is the societal romanticization of sacrifice in motherhood — the idea that self-sacrifice is beautiful. I do not know if the praise for such qualities actually removes these burdens for them, or if it, in fact, just further enforces these traits in mothers.

It is also difficult because such ideas trickle down to even women without children. It is a burden imposed upon them who, despite their choices or age, are still asked to offer so much of themselves for others. Take Nani, a sister and a daughter, 19 and already burdened with the expectations of motherhood.

To empower these women out of these historically-forged expectations will mean taking a deeper look into how our systems work and how they continue to enforce gender roles in subtle ways. The burden should not be on women to do more, but rather on the world that allows them to suffer. How are patriarchal views creating gaps in basic support for women?

It will also mean writing new stories about women who live all different kinds of lives. What should we teach our young girls?

Here we call on the mothers, sisters, daughters, girlfriends, and girl friends, who at some point in their life have felt the weighted expectation of a woman’s self-sacrifice.

This is what you must know: be a little selfish, if you must. How long have we suffered the expectation of absolute sacrifice throughout the course of this world’s history? – Rappler.com

Issa Canlas is a student at the University of the Philippines Diliman and a current Rappler intern for Digital Communications.