[OPINION] What are the real political lessons of the Diliman Commune? 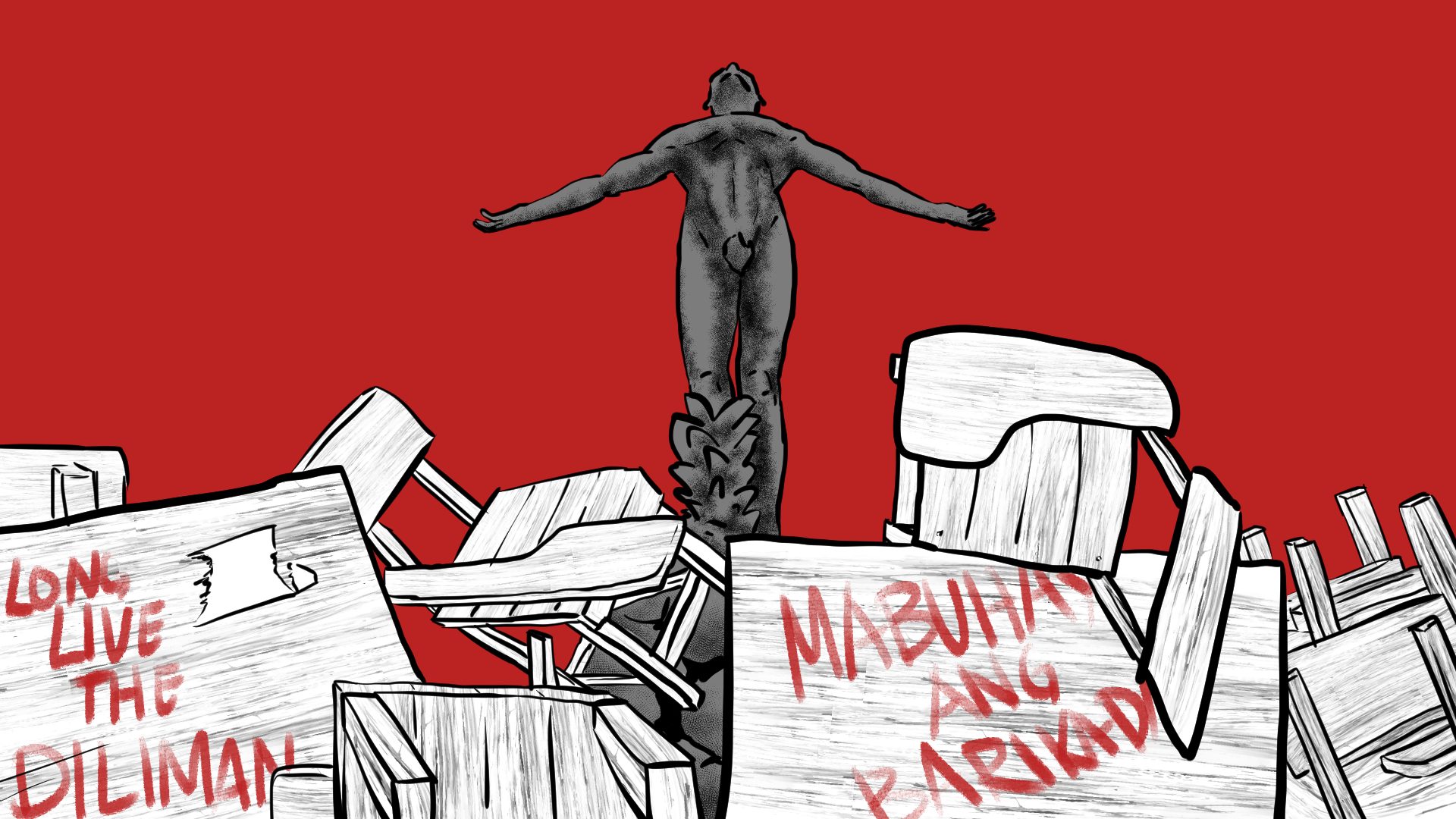 Facebook Twitter Copy URL
Copied
'The real lessons of the events for students and workers today can only be drawn through a critical examination of the political forces involved, particularly the CPP'

February 1 to 9 marks the 50th anniversary of the “Diliman Commune.” In 1971, students erected barricades at the entrances to the University of the Philippines (UP) Diliman campus, occupied buildings and facilities, and fought off incursions by military and police forces with molotov cocktails and inventive forms of resistance, holding the campus for 9 days.

The anniversary is of more than mere historical significance. The problems that confronted these students have reemerged with a vengeance: an immense social crisis, attacks on academic freedom, and advanced preparations for authoritarian rule.

On January 15, Defense Secretary Delfin Lorenzana announced that the Armed Forces of the Philippines (AFP) were unilaterally abrogating their long-standing agreement with UP banning the entrance of military forces from campuses. Citing alleged “communist recruitment,” Lorenzana declared that the campuses had become a “safe haven for enemies of the state.”

The anniversary of the Commune is thus necessarily less an occasion for celebration and nostalgia, and far more urgently an opportunity to assess the lessons and legacy of the experience, which prove to be of immediate relevance today.

Drawing such lessons requires above all a correct understanding of history and politics. The dominant narrative of the Diliman Commune is predicated upon 3 myths: that it was a spontaneous occurrence, that it was limited to the Diliman campus, and that it was a victory for the students.

A recently published opinion piece in Rappler repeated these ubiquitous myths, declaring that “a careful piecing together of archival material, media reports, eye-witness accounts, and narratives by surviving participants would show that the Diliman Commune was a spontaneous outburst amid repression.”

The authors of the essay — Orly Putong, Karlo Mongaya, and Rochel Bernido — attempted to present scholarly criticism of these myths as a right-wing plot. They wrote, “Anti-communist scholars and state propagandists have painted a picture of the Commune as a premeditated plan by conspirators to foment anarchy and destabilize the Marcos regime in favor of their liberal political allies.”

There is a stock right-wing account, promoted by the military, that depicts every outbreak of social unrest as a communist plot for a supposed seizure of power. The function of this narrative is to serve as a pretext for reactionary laws, repression, and dictatorship.

What Mongaya and his co-authors imply, however, is that any criticism of the role of the leadership of the Communist Party of the Philippines (CPP) in the Diliman Commune is illegitimate as it is equivalent to these right-wing falsifications. As is always the case, the glorification of spontaneity serves to cover up the historical betrayals of leadership.

As I extensively detailed in an article published in Philippine Studies in 2018, the Diliman Commune was neither purely spontaneous nor limited solely to the Diliman campus. The real lessons of the events for students and workers today can only be drawn through a critical examination of the political forces involved, particularly the CPP.

The barricades of the Diliman Commune, far from being a spontaneous response to unanticipated developments, were part of a coordinated set of barricades erected throughout the University Belt and at UP Los Baños. Six students were killed in street battles on Recto Avenue and Mendiola Bridge, while only one was killed at Diliman, but their names have been forgotten as a result of the myth of the isolated and spontaneous Commune. Certainly the social anger of the students was not fomented by outside agitators. It expressed the crisis of capitalism in the late 1960s and early 70s and was part of a growing revolutionary sentiment among workers and youth around the globe. This anger received political direction, however, from the Communist Party of the Philippines through two youth organizations that followed the CPP’s political line: the Kabataang Makabayan (KM) and the Samahan ng Demokratikong Kabataan (SDK).

The CPP is not a Marxist party, and never has been. It was founded by Jose Ma. Sison at the beginning of 1969 out of a break with the Partido Komunista ng Pilipinas (PKP). Both the PKP and CPP were Stalinist; their programs were dedicated not to socialist revolution but to a national democratic revolution, which would be carried out through an alliance with a section of the capitalist class, whom they called the “national bourgeoisie.”

The PKP supported Marcos, and after he imposed martial law the party endorsed his dictatorship and entered his cabinet. The CPP allied with the Liberal Party and the elite opposition to Marcos, who were conspiring to remove him from power. The elite opposition supplied the CPP-allied organizations with funding, favorable press coverage, and regular air time on radio and television.

Looking to destabilize Marcos at the beginning of an election year, Sison launched a brief ultra-Left policy of uninterrupted upsurge. The KM and SDK attempted to seize control of the trade unions in which they were working and split them in February 1971, forming new “red unions” with limited membership and headquartered at Vinzons Hall on the Diliman campus.

The barricades of February 1971 were part of this policy. They were ostensibly erected in support of a jeepney driver strike, but in fact contributed to the suppression of the strike. Within weeks the KM and SDK had split the jeepney drivers union, fragmenting the workers’ struggle, leading to the temporary curtailment of a strike wave.

On historical examination, the Diliman Commune was an unmitigated defeat for the radicalized youth and students of 1971. This was not due to their lack of courage or audacity, but the guiding political program — Stalinism — to which that energy was subordinated.

The fundamental task confronting workers and youth in 1971 was to prevent the imposition of dictatorship. To hail the Commune as a victory when the writ of habeas corpus was suspended within months and martial law imposed the next year is to ignore the realities of history.

The CPP used the Stalinist program of national democracy to channel social unrest behind the political interests of a section of the elite who were not seeking to defend democracy but to remove Marcos from office. Fundamentally opposed to the Marxist perspective of the independent fight of workers for a socialist program, the CPP subordinated the vast social force capable of defending democracy, the working class, to the conspiratorial interests of a rival faction of the elite. This is what made martial law possible.

This remains the perspective of the CPP. It was in the name of “national democracy” that they enthusiastically supported Duterte in 2016. In a statement published on February 1, the CPP made their own assessment of the lessons of the Commune, in which it called on students today to struggle “waving the red banner of national democracy.”

The lessons of the Diliman Commune can be drawn not by cheering its supposed victory, but through a clear-eyed assessment of its failure.

The essential lesson is this: it is impossible to wage a successful fight against the growing threat of dictatorship on the basis of the Stalinist program of national democracy and its orientation to forming an alliance with a section of the elite. All the courage and audacity in the world will end in defeat if it is mobilized behind a banner that serves hostile class interests.

This historical assessment of the CPP is a criticism from the Left, not the Right; it safeguards the interests of workers and young people, not the state. The Marxist opposition to Stalinism has a century-long history. Those looking to understand it should study the political struggles waged by Leon Trotsky and the movement he founded. – Rappler.com

Joseph Scalice is a postdoctoral researcher at Nanyang Technological
University (NTU), studying revolutionary movements and authoritarianism
in Southeast Asia with a focus on the postwar Philippines. He is the
author of the forthcoming book, The Drama of Dictatorship: Martial law
and the Communist Parties of the Philippines (University of Wisconsin
Press, 2022).