Facebook Twitter Copy URL
Copied
'As long as poverty is rampant and government is unable to provide every Filipino with basic services, vote-buying, whether explicit or implicit, will persist throughout every election'

May 9, 2022 marked what was, perhaps, the most consequential Philippine election since 1986.

The Marcoses – the world’s poster children for corruption, extravagance, and authoritarianism – are set for a triumphant return to Malacañang in what is shaping up to be the largest electoral landslide in recent history, more than 36 years since the People Power Revolution that drove them to exile in Hawaii. The road to their rehabilitation had been decades in the making. Last Monday, it reached its culmination.

This election proved the battleground for a “new” and “old” kind of politics. On the one end, a campaign funded and motivated by acts of extreme volunteerism the likes of which we may never see again, possible only through the collective effort of a broad spectrum of Philippine progressives united in defense of democracy and the dream of a better country. On the other, an unholy union between the Philippines’ most infamous politico-economic elites, a concerted effort at disinformation, black propaganda, and historical revisionism, and the well-oiled machinery of  patronage and clientelist politics which, in place of genuine engagement with the public and their concerns, they relied on to deliver many of their votes. In the end, it seems “old” politics will win by a margin of 16 million. But the questions on everyone’s minds are: Why? Was it fraud? The strategic misuse of social media? Can we chalk it down to the “uneducated” or the apathetic voter? I do not think so. The truth is that Marcos Jr. had only exploited Filipinos’ sentiments against the failures of liberal democracy. He did not materialize them of out of his own will.

When the elder Marcos was ousted in 1986, the Aquino regime brought with it the promise of a better Philippines: an end to corruption, murder, and violence, economic recovery, the restoration of democracy, the rule of law. Instead, Cory Aquino re-established the old political elite, reconciled with the new ones Marcos Sr. had introduced, disenfranchised the peasantry, and reneged on her commitment to genuine agrarian reform. When her son, Noynoy Aquino, promised as much under his tuwid na daan, Filipinos were met with an infamous corruption scandal,  anomalous dealings, botched military and police operations, and an economic boom that disproportionately benefited the country’s elite, out of reach of the general public, where continued  social, political, and economic inequality stood contrary to true inclusive development.

For many since, the idealism that spurred the EDSA Revolution seemed all for nothing, its fire suffocated by a promise broken, a revolution betrayed. What took its place was an iron fist – a nostalgic longing for peace, order, stability, and the “golden age” fantasy of authoritarian rule. Indeed, many voters have become ambivalent to democracy, skeptical of their and their countrymen’s ability to adequately manage the freedom that democracy provides, exhausted with the tired old narratives of high-minded and lofty ideals. To their eyes, the Marcoses were victims – victims of an oligarchic coup d’etat that robbed them of what could have been their “greatest” years; victims just like them. And whatever changes the Liberal Party synonymous with the Aquino legacy could have made in the lead-up to 2022 or, for that matter, 2016, would have never been enough to earn their forgiveness for this theft.

The fall of the ‘dilawang’ Liberal Party

Now, democracy is far from perfect. When we institute a system of government predicated on the belief that the rule of the many will always prove wiser than the few, we inevitability invite with it all the dangers of human plurality – alongside brilliance, our prejudices; alongside courage, our fears; alongside compassion, our selfishness. That is the capriciousness of human nature. Democracy’s success has always rested on our ability to establish consensus and reach a compromise between competing actors and their interests. That we were unable to prevent the re-establishment of a national oligarchy and their continued dominance over the political scene post-1986 – that we were unable to prevent the rule of the many from degenerating into the rule of the few through the many – means we have unequivocally failed in that regard. Left with little choice, the disgruntled elements of Philippine society rallied around Rodrigo Duterte in 2016, and they rallied again around Ferdinand Marcos Jr. this 2022.

Marcos’ victory cannot be reduced to a failure of election but the failure of an entire system of elite democracy which has transformed the country into the personal plaything of a few influential individuals. After all, we need not look further than the winning tandem – a marriage between two prominent dynasties, propped up by billionaires  who have benefited greatly under the past administration, masterminded by one of the most enduring personalities in the history of Philippine politics: Gloria Macapagal-Arroyo. And I make this clear – even the Robredo camp had more than its fair share of oligarchic support. In fact, the Pink Revolution’s balancing act between the interests of traditional politicians and potential donors on one end, with the interests of the marginalized on the other, is undoubtedly one of the reasons why it failed to win over many working-class voters in the first place; and why the Independent Robredo could not shake off her association with the Liberal Party in the eyes of many Filipinos.

Doubtless, six years under a Marcos presidency would be horrible to imagine. In any other country, an exiled dictator’s son would have never been allowed this close to the pinnacle of power. Nevertheless, reality is right at our doorstep. Its danger was evident as early as 2015. Our emotions are high, our anger is justified. And I cannot help but feel an overwhelming sense of guilt at not having done enough to prevent it. But elections are not the end-all and be-all of the democratic project. Governance is a collective process, one that involves us as much as it does the country’s leadership. 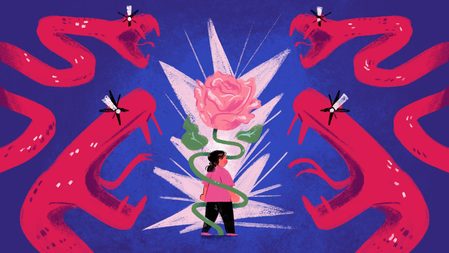 This election has simply proven that which many of us already know – that it is still traditional politics that determine the outcome of Philippine elections. Local politicians gave Marcos Jr. the one thing he did not already have in 2016: access to the political machinery of their petty kingdoms. That has made all the difference. As long as poverty is rampant and government is unable to provide every Filipino with basic services, vote-buying, whether explicit or implicit, will persist throughout every election. As long as there are warlords and private armies in  Mindanao, electoral violence, and violence in general, will persist south of the country. As long as patronage and clientelism are pervasive – and it begins with utang na loob – politicians and voters alike will continue to support whoever is most likely to reward them for their efforts.

Until we manage to dismantle the Philippine elite’s monopoly on wealth and power and present a viable (and popular) alternative to trapo-style governance (on either end of the spectrum), there can be no future for liberal democracy in this country. There will be more Marcoses, there will be more Dutertes, and we will contend with them until the end of our days. So maybe it is time we rethink our strategy; to chip away at these oppressive establishments not at their summit but at their foundation; to hold to account those rightfully beholden to us at the level of local government. After all, we are not clients; they are not our patrons. We owe nothing to them; they owe everything us.

If there is a lesson to be learned here, it is that transformative action and civic mobilization are our only real path forward. We have already planted the seed for a genuine people’s movement in this election; now is the time to nourish it. We must not lose hope and we must not lose our  momentum. The rose will bloom – one day. Until then, our work is far from over. – Rappler.com

Kyle Parada is a senior taking up Political Science at the Ateneo de Manila University. To know the truth behind the myths of the Marcos family, he invites readers to visit the Ateneo’s Digital Martial Law Museum.