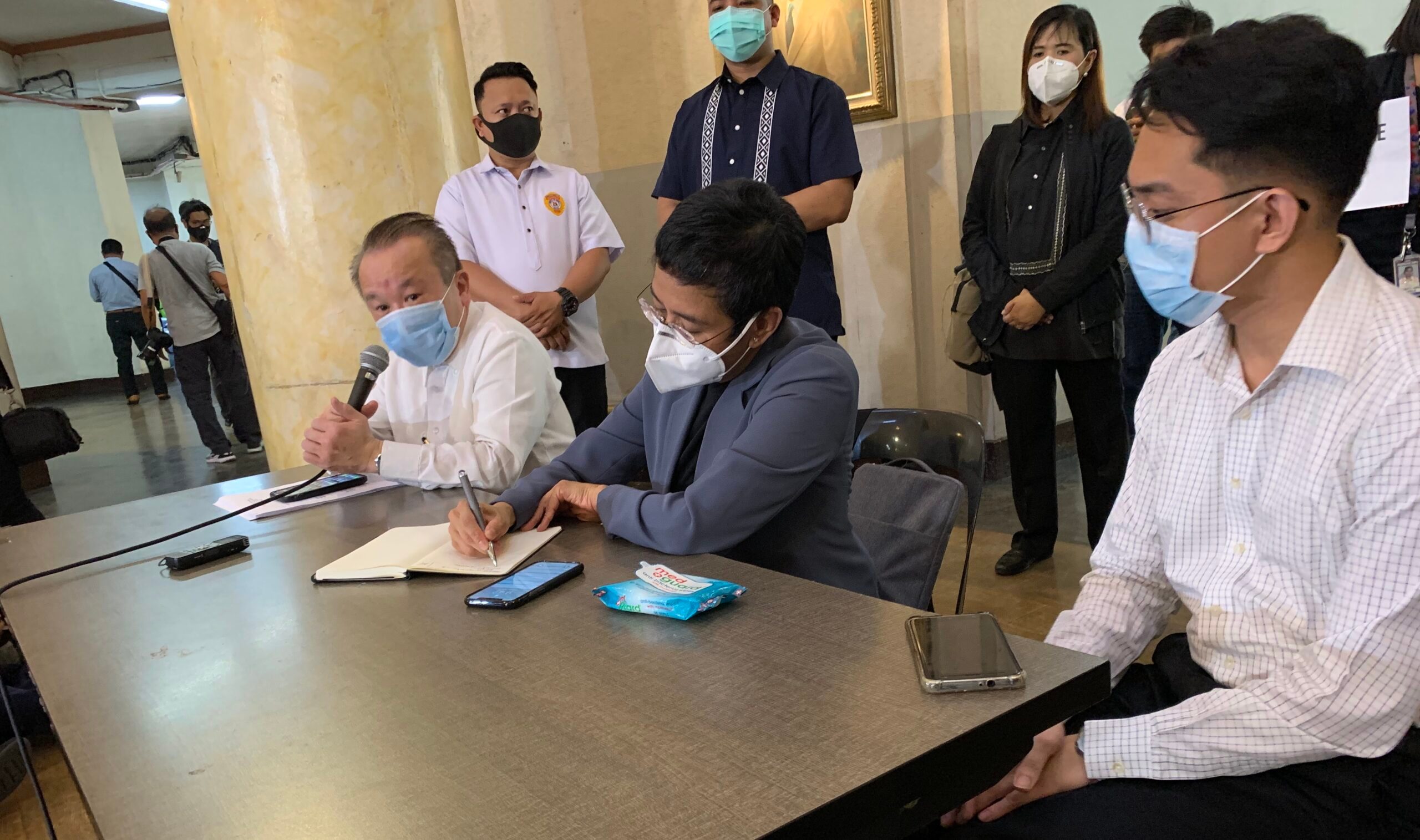 Facebook Twitter Copy URL
Copied
I would be lying if I said that Maria’s winning the Nobel Peace Prize changed our world. It is still upside down.

There is at least one thing people don’t tell you before you enter news media: For better or worse, there comes a point in your life when time is measured not by personal milestones but the events and people you cover.

The “after 2016 elections” period was strange and tragic – covering killings in the name of President Rodrigo Duterte’s so-called “drug war” to witnessing the lower house of Congress allocate a mere P1,000 for the country’s human rights commission.

News assignments as a measure of time worked, for the most part, until it didn’t in January 2018, when the Philippines’ Securities and Exchange Commission revoked Rappler’s registration for supposedly violating the Constitution and the Anti-Dummy Law (an interpretation we disagree with).

January 15, 2018, sometimes plays a movie in my head – finding out about the decision and the flurry of activity in the newsroom in the hours that followed. The day culminated with a press conference – inside our newsroom – so our editors, our manangs, explained why the SEC decision was wrong and that we’d be challenging the decision.

In Rappler, we’ve always been taught to persevere. If public officials, for one reason or another, are evasive, you find a way to track them down and ask the difficult questions. If you’re sent to cover a massive disaster, you’re supposed to be able to zoom in on the stories that matter without missing the bigger picture. But nearly five years of experience on the field did not prepare me – most of us, really – to be the focus of the news cycle. It wasn’t just about being the news instead of just reporting it – it was about the uncertainty the future suddenly held.

In a general assembly a day or two after, our manangs (a Filipino term of endearment for an older sister or female relative) did not falter when they told us: We’d fight this out, contingencies were in place, and our jobs were secure. What we should worry about, they told us then, was pursuing the stories we’d been working on before the SEC’s decision.

We walked away from that meeting not knowing that we’d be okay – because really, under a Duterte administration, “okay” is hard to come by – but we knew that we’d fight and that we had each other. That means a lot when you’re in your 20s and just starting to figure out your place in journalism and the world.

The months and years that followed would turn more and more surreal. In the same office where we found out Rappler’s registration had been revoked, I saw Maria Ressa, who was Rappler executive editor at the time, served an arrest warrant over a cyber libel case filed five years after the article in question came out, way beyond the more typical one-year prescription period for libel under the Philippines’ Revised Penal Code. In suing Maria and a former colleague, the country’s justice department cited an obscure law, therefore extending libel’s prescription period from one year to 12 years. Rappler had long raised alarm over the same cyber libel law.

We streamed the process – as you would – even as state agents told us we could not (they were wrong). Maria and our manangs were in a meeting when government agents arrived in the office just before 5 pm on February 13, 2019 – meaning Maria couldn’t post bail right away and would have to spend the night in their custody. The next day, after a much-deserved post-bail meal – Maria showed up in the office to applause. It was barely a victory, that she was now out on bail, but we were just glad she was safe and back “home.” She went back to the office not for drama but because she had meetings and interviews. That’s just how it is – cases and harassment get in the way but we persevere and get back to work.

On June 15, 2020, months after the entire Philippines first locked down because of COVID-19, Maria and the same former colleague were convicted of cyber libel. I don’t remember how I felt in the immediate minutes after I found out about the verdict but I do remember something that still makes me chuckle – Maria was taking down notes during her own press conference. Even as she questioned the verdict against her, Maria was a journalist.

As much as I don’t want to make this piece about me, I’d be shortchanging you if I don’t admit that I fell apart the moment I was back home. Just a few months ago, the country’s largest media network ABS-CBN went off air following a government commission’s cease and desist order, putting nearly 11,000 media jobs in danger. The House of Representatives – composed of a “supermajority” of Duterte allies – did not act on the media giant’s franchise renewal.

A few weeks after Maria’s conviction, the same House – led by representatives allied with Duterte – denied ABS-CBN’s franchise application. Thousands of my colleagues from ABS-CBN have since lost their jobs.

Just like Rappler, Duterte had attacked ABS-CBN in the past.

Still, we persevered. Or, as Maria would say: “We will not duck. We will not hide. We will hold the line.”

It had been a long and grueling work week as candidates filed their certificates of candidacies (COCs) across the Philippines. In the Philippines, elections are theatrical – a circus, even. COC filing week was the opening act. After a long day of Slack notifications about COC-filing and attempts to ID who was going in and out of the venue, came a strange message: Maria won the Nobel.

Let me tell you – mere proximity to a Nobel Prize laureate is, strangely, overwhelming. Email, chat groups, DMs, and social media channels were inundated with congratulatory messages (what for!), those asking for confirmation, and inquiries from media organizations all over the world.

It took a few hours for it to fully sink in: not just that our boss, someone we’d consulted, debated, and collaborated with, had won the Nobel Peace Prize, but that two journalists were recipients of the award.

Maria and Dmitry Muratov, said chairwoman Berit Reiss-Andersen of the Norwegian Nobel Committee, were awarded “for their courageous fight for freedom of expression” in the Philippines and Russia. But they also stood as representatives of “all journalists who stand up for this ideal in a world in which democracy and freedom of the press face increasingly adverse conditions.”

I would be lying if I said that Maria’s winning the Nobel Peace Prize changed our world. It is still upside down.

What would have been a moment of immense pride – we Filipinos are known for our unabashed pride over every individual and collective achievement – became a talk point for disinformation. It’s not surprising. Maria, Rappler, and many other individuals and organizations in the Philippines who’ve questioned and challenged the Duterte administration, have been targets of online harassment and disinformation.

The administration, at first, was silent over the win. After all, it would mean acknowledging their role in attacking the free press in the Philippines. They’d extend a half-hearted congratulations days later – only to attack Maria in the same breath.

But then the congratulations aren’t the point of this all, aren’t they.

As I write this, there is a little under two months left before millions of Filipinos head to the polls to pick their next set of leaders, including its president, for the next six years. The candidate who leads the presidential polls is the son of a late dictator, whose regime saw the country’s coffers emptied and thousands dead, disappeared, tortured, or jailed. The same candidate has also been linked to massive disinformation networks with the intent of denying and rewriting Philippine history.

While Duterte himself is leaving office in a few months, his daughter is running for the second-highest post in the land and leading preference polls. Duterte, of course, exits the presidency with the threat of an International Criminal Court probe looming over him.

The world is still upside down but there has been no shortage of colleagues who’ve been willing to stand up. In January 2022, ABS-CBN news boss Maria Regina “Ging” Reyes called a joint fact-checking initiative “our collective action to set things straight and seek to make this upside-down world right side up again.” It’s a lofty goal in a world inundated with disinformation and in a country where false narratives sometimes dominate the election discourse.

During Women’s History Month, mass media and social media is typically flooded with manifestos about how women deserve equal rights, about how women are strong, and about a woman’s worth. I’ve never needed the reminder because I had the privilege of growing up in a community that always valued being a woman. I was always taught that women are strong and capable and that there is strength in being caring, loving, nurturing, and persevering.

Every day, I’m reminded by and through Maria, Ging Reyes, and our Rappler manangs that women are capable, strong, but are also allowed to step out and find the resolve to fight again.

In the Philippines, we are able to hold the line not because we are courageous as individuals but because we know there is always someone who’ll stand with us and because, frankly, we have to. – Rappler.com