Facebook Twitter Copy URL
Copied
Constitutional rules apply across the board. What matters is we avoid the President’s lazy analysis or careless invocations of phrases.

With Omicron, the government task force raised NCR to Alert Level 3 last week. The Metropolitan Manila Development Authority (MMDA) then declared that the mayors have “agreed” to keep the unvaccinated from leaving their homes.

On Thursday night, January 6, the President ordered local government units to “restrain” the unvaccinated, adding that civilians can be “deputized” to enforce this. If they refuse to stay put, they will be arrested. By Friday, January 7, the President’s spokesperson clarified that this order to restrain the unvaccinated applies to the entire country “regardless of alert level.”

The President explained his logic this way: “I said the government must come up with measures to protect public interest, health, order, safety. Because it is a national emergency, it is my position that we can restrain.” Based on this justification, it seems this is just the latest iteration of the President’s lazy legal analysis when it comes to governing:

3. decree that the target group is entitled to less rights;

4. proceed to oppress. Egging civilians to confine their neighbors makes this latest “variant” worse than its predecessors.

Admittedly, the instinct for self-preservation triggered a response that favored the MMDA announcement. But later that night as I read through a spirited discussion about the issue in one group chat involving some of the most learned individuals in our profession, I realized the matter wasn’t as simple as the President’s personal logic suggests. There are a lot of questions that need to be navigated.

As a starting point, this is not just a matter of “limiting mobility.” Confining people inside their homes is a restriction of liberty. While it is not exactly imprisonment, the deprivation is still quite burdensome. House arrest is still a form of punishment. 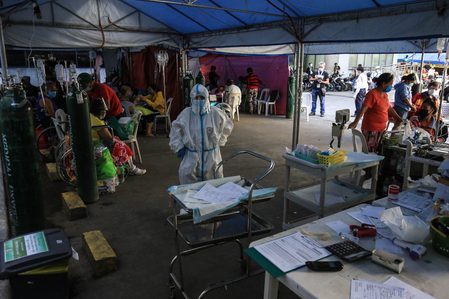 On that note, confining those with COVID-19 in their homes seems justifiable – the virus should not be able to go around and spread. The unvaccinated, however, present a trickier situation. These are healthy individuals, indistinguishable in terms of viral load from the vaccinated. Unlike a few months ago, vaccine-makers and governments are not as sure that vaccines stop the spread of the virus. If both vaccinated and unvaccinated can spread it, why are we “punishing” only those who refuse a vaccine? It seems the government will need to be very particular in terms of fashioning the “compelling state interest” (a constitutional requirement) to justify their confinement.

Is this the same as malls or restaurants refusing to admit unvaccinated individuals? Not quite. Private establishments have a measure of control on who gets to enter their premises. There’s a world of difference in letting people leave their own house upon pain of arrest. Is vaccination similar to other impositions like face masks? To ask individuals to partially cover their face with a piece of cloth seems less of a burden than asking them to accept a foreign substance into their bodies. Does it matter that the discriminatory treatment is only temporary? Well, what does temporary mean? Until there is another surge or another variant?

On the flip side, according to what kind of right will the unvaccinated challenge these restrictions? Personal choice? Bodily autonomy? Those who insist on bodily autonomy argue that to agree to be vaccinated against COVID-19  means that you agree to receive a foreign substance inside your body. That substance stays there. There can be nothing more intrusive than that. Add the fact that the makers of that foreign substance have been excused (by the Bayanihan Act) from any liability.

Local courts that will encounter these challenges will have to weigh whether these permutations of the “right to choose” rank as high in our society as they do in Western societies. A tough climb. Consider that unlike in the US, local “pro-choice” advocates have not succeeded in decriminalizing abortion. Perhaps a vaccine objection based on religious beliefs? If ever, those would hew closely to some of the challenges against the RH Law years back. (Incidentally, those religious objectors prevailed.)

The government might question whether this choice is really “a personal matter,” especially in terms of its effects. Do the unvaccinated burden just themselves? Our frontliners who have suffered through two years of filled hospitals may disagree.

As well, the government may cite its data that unvaccinated people tend to have markedly worse complications than the vaccinated. Worse outcomes cause more hospitalizations, leading to a greater strain on resources. With limited resources, the government may frame this regulation as a matter of resource allocation.

Speaking of resources, how about those of the view that the government and employers have a duty to provide a safe work environment? How will their demands be balanced with the demands of those who refuse to be vaccinated? Will those who comply with government mandates be put in a less desirable situation just to accommodate those who insist on refusing?

In constitutional litigation, framing the question to be submitted to the courts is the most crucial step. If the unvaccinated frame this as a case of discriminatory treatment, the case might turn on whether there is a legitimate difference between those who agree to take the risk and be vaccinated and those who refuse. Does this personal choice then become a valid reason to discriminate against those who refuse? By discriminate, what we really mean (in constitutional law) is that those who fall within the group have less rights. So, are those who choose to refuse a vaccine entitled to less rights than those who accept it? In other words, do our personal health choices now come with the consequence of falling within a disfavored class of citizens?

The crux of the matter might lie in the undeniable fact that we are STILL in the middle of a pandemic. Constitutional cases do not operate in a vacuum. Context matters (at least to the legal realists). Millions have died, thousands are suffering, and the virus isn’t done yet. (Regardless of the careless remarks of a priest-biologist, Omicron is NOT “a blessing.”) There might be more space to debate policy choices once we are out of the woods, but should we do it while mired in the swamp?

What matters is we avoid the President’s lazy analysis or careless invocations of phrases like “the needs of the many, outweigh the few.” Constitutional rules apply across the board. And while we find ourselves in the “majority view” today (pro-vax), we might on some other issue (i.e. national IDs) be in the minority soon. The past five years have taught us the folly of giving in to the quick-fix solutions offered by the President at the cost of whittling down Constitutional principles.

The State’s duty to protect the public during a pandemic is clear. But so is an individual’s right to bodily integrity. The easy path is that of the President’s – to say that one bulldozes the other. Under a just and moral society, the answer lies somewhere in the middle. If these questions do reach our courts, we can only pray that the judges and justices who decide them be blessed with the Lord’s guidance. These will certainly be one of the most difficult decisions any of them will make. – Rappler.com

John Molo is a commercial law litigator who teaches Constitutional Law at UP Law, where he chairs the Faculty’s Political Law Cluster. He is the editor-in-chief of the IBP Journal and a trustee of the Philippine Bar Association. He has argued several landmark cases before the Supreme Court.