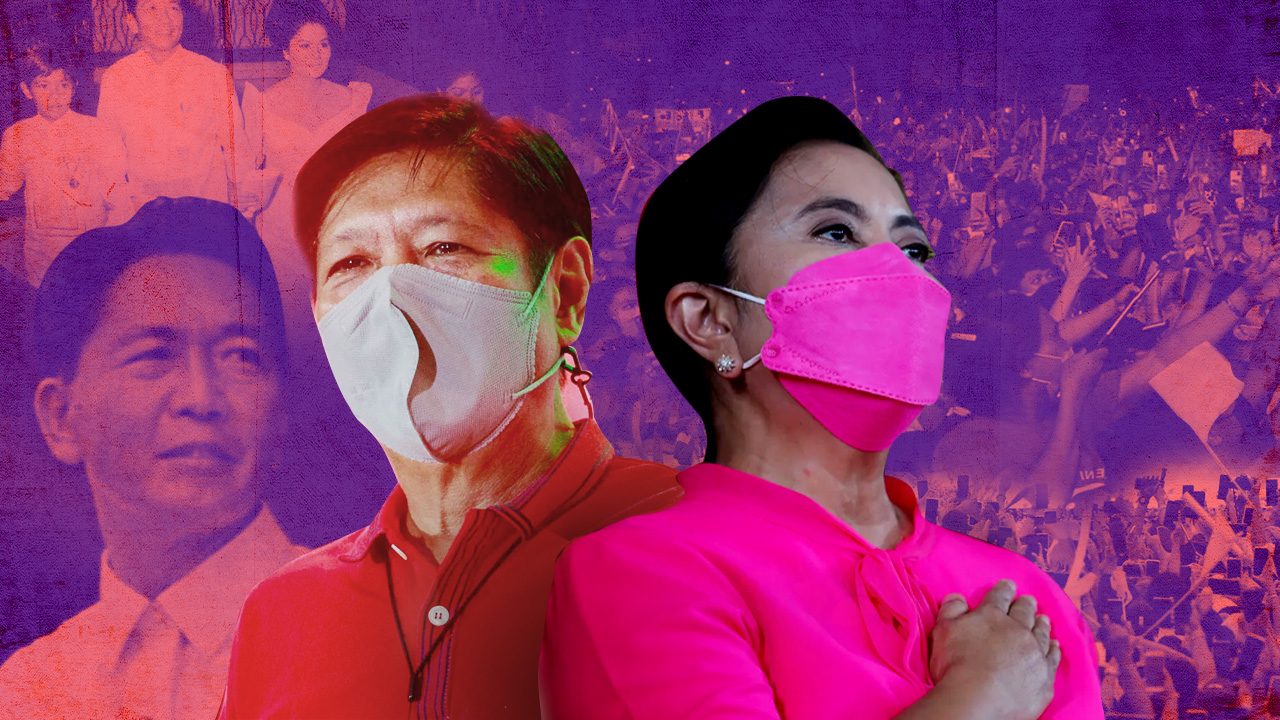 Facebook Twitter Copy URL
Copied
Given all his proven inadequacies, he is indulged as little more than a front person who has the electoral numbers – if you can believe the polls – but neither the keenness nor the capability to lead, let alone rule

The presidential election may be officially multi-sided, with 10 candidates on the ballot, but, for all intents and purposes, it has come down to a duel – between Ferdinand Marcos Jr. and Leni Robredo.

The two being classic opposites, the fight was only bound to go that way. Robredo’s run is in fact driven by a redemptive cause in reaction to everything Marcos represents – dynastic politics, official corruption, cronyism, high-handed governance, and falsification of histories for self-promotion, a phenomenon made prodigiously malignant by communication technology in the hands of trolls, those paid hacks in cyberspace.

It was actually Marcos’ father who, with his dictatorship, from 1972 to 1986, set the example. It may have lurked at the back of the mind of just about every president after him, but it’s Rodrigo Duterte who has followed it to its most destructive consequences. It’s no surprise, really: he has been such a loyal disciple of the dictator that among his first presidential acts was to lie him under the same hallowed grounds as the nation’s legitimate heroes.

Don’t be fooled either by his pronouncement to not endorse any presidential candidate; that he repeats it all too often tends only to betray doubts his endorsement would help. At any rate, his daughter Sara is running mate to Ferdinand Jr., to whom it falls to step up and consolidate power if he, Duterte, with his term ending, and their co-conspirators were to escape punishment for their crimes.

There’s no use comparing the crimes in Duterte’s time with those in Marcos Sr.’s, but one point of comparison should be instructive – for what it tells not only about Duterte but also about ourselves: Duterte didn’t need to declare martial law to be able to militarize or otherwise coopt civilian agencies and institutions, thus creating an easy environment for perpetrating those crimes in those scales.

Tens of thousands, by a modest estimate, are dead in that indiscriminate war on drugs – for that Duterte and his war enforcers have been sued in the International Criminal Court.

Duterte is also leaving us buried in debt for more than P12 trillion, of which more than half has been incurred under his regime. It’s a burden even our unborn progeny will bear for generations.

The pandemic that struck on the fourth year of Duterte’s term might have passed for some excuse for the extreme hardship of the next two years. But the situation was exploited to favor cronies, who cornered deals for medical supplies at obscenely padded prices. For its own part, the government chose to import the most expensive yet the least efficacious vaccines.

It all made for a spectacle of greed and heartlessness; not only did corruption not abate even in the most desperate period of our life, it proceeded with a vengeance, deepening to unseen extents the poverty and hopelessness that have been the abiding consequence of privation in our lopsided society.

In all this, China took a deceptive but decisive hand; it provided the loans and the imports. In fact, for any projects open to foreign sourcing – whether for loans or logistics or labor – China has been the first choice for Duterte, despite its exploitative terms and generally dismal record. Indeed, Duterte has consigned us to something far worse than plain indebtedness to China; he has actually begun to sell us into vassalage. His first act was to cede our strategic and resource-rich western sea to the Chinese. It was a deal that compounded treason with humiliation: The Chinese had just lost to us in the arbitral adjudication of the territorial dispute over those waters.

But, lest we overlook, the road that has taken us to our hells was paved for Duterte by his predecessor, Gloria Arroyo. It was from her that he inherited China as patron and protector. She would have herself brought to consummation the treason with China during her own presidency if only she had not been found out too soon, and stopped. Actually, China is only one of two inheritances from her that have proved most useful to Duterte; the other is a Supreme Court she managed to pack and he now counts on to lend legitimacy to his acts.

So, how does Ferdinand Marcos Jr. fit in the conspiracy? Given all his proven inadequacies, he is indulged as little more than a front person who has the electoral numbers – if you can believe the polls – but neither the keenness nor the capability to lead, let alone rule.

As he himself has admitted, in a Freudian slip – which is where liars, especially those not-so-bright ones, are caught – all he wants is “to protect my family.” From there it should be easy enough to prognosticate: All Junior wants is for his family to keep its plunder (estimated at $10 billion at the time of the crime) and remain untouched by the courts. That makes him easy hostage to the conspiracy, which itself has coopted the system of crime and punishment.

Or thinks it has. It doesn’t seem to know it already has been beat – by Leni Robredo, not by her alone, to be sure, but with a volunteer army that materializes out on the streets, the true battlefield of democracy, in the hundreds of thousands in every instance, boiling with energy, asserting ultimate power with but one sword, that of righteousness. It looks to me more like our young claiming their future for themselves, after our people power of 1986 proved good only for a quick burn.

But, understandably, China, Arroyo, and Duterte are the last to know that.