Facebook Twitter Copy URL
Copied
'What degree of moral ascendancy can Bongbong muster to motivate people to pay their taxes?'

In barely two weeks, AWARE collected and delivered to Comelec this week 15,000 signatures supporting the suit to cancel the Certificate of Candidacy of Bongbong Marcos to run for the presidency in 2022. Bongbong’s  conviction by the final judgment of the Court of Appeals in 1997 for violations of the Tax Code disqualifies him from holding any public office. Bongbong did not file income tax returns from 1982-1985. He also denied under oath in his COC that he had ever been convicted of any crime carrying this penalty, a perjury that would also bar him from contesting the presidency.

Other issues have surfaced in the wake of the furor raised by the crime. Why, for instance, did the Court of Appeals (CA) spare Bongbong the penalty of imprisonment that the Regional Trial Court had imposed in 1995? What extenuating circumstances did CA Third Division justices Gloria Paras, Lourdes Tayao Jaguros, and Oswaldo Agcaoili discover to extend this clemency?  Whatever the basis for waiving the prison term,  Bongbong wants more.  His lawyers now take the escape from jail as the justification for also dispensing with the accessory penalty of the ban from public office. Relief from imprisonment, they argue, suggests that the crime was not regarded as constituting moral turpitude and that the penalty of perpetual disqualification, therefore, should not apply. They also contend that, since he managed to win election for public office, despite the conviction, he should be allowed to run again. Seriously? They want us not only to ignore, but to reward impunity. As pointed out by former SC Chief Justice Artemio Panganiban, the disqualification is a consequence of the criminal conviction, regardless of the penalty imposed. Moreover, denial that the crime involved “moral turpitude” is a separate issue that must be defended on different grounds. But Bongbong’s lawyers may be spared further labor and pain. Before they can weave out of whole cloth  the narrative for these challenges, they must first confront a prejudicial question: Did Bongbong Marcos settle the tax liabilities and the penalties imposed upon him by the Court of Appeals for his failure to file income tax returns from 1982 to 1985?

The Quezon City Regional Trial Court has certified that it has no record on file that Bongbong had completed this settlement. Antonio Carpio, who had served as Acting SC Chief Justice, sees no basis for questioning this certification. More cautiously, Panganiban suggests obtaining the certification from the Clerk of Court of the entire QC-RTC, and not just from one of its 57 branches. Fair enough. But going by the process followed when Maria Lourdes Sereno was ousted as SC Chief Justice, because she could not show her SALN submissions from the University of the Philippines, Bongbong bears the burden of proof. Without convincing evidence that he has paid for his crimes, the decision of COMELEC on cancellation would appear to be mainly administrative and ministerial in nature, dictated by the presentation of the facts, or their absence, without need of further argumentation.

But Bongbong being Bongbong, with the resources and connections at the disposal of the Marcos family, it is entirely possible that COMELEC will choose to kick this can of worms down the road for the Supreme Court to digest. Before we get lost on the technicalities of laws and legal procedures, we must stop to consider, not the issue of the penalties for tax evasion and their application in this case, but the more fundamental question of critical public concern: Why did Bongbong commit the crime in the first place? Why did he not file his income tax returns and pay the proper taxes, as ordinary citizens are expected to do, under pain of imprisonment? Of course, Bongbong is not any ordinary citizen, even in that period from 1982 to 1985, within which he served as Governor of Ilocos Norte. Surely, he did not lack for staff to do the paperwork or the financial resources to cover the tax payments. His official position should have made him more conscientious about paying taxes. Moreover, he was the heir apparent, the princeling of the First Family that had imposed and maintained for a decade a Martial Law regime over the country. Or, perhaps, precisely because of his privileged status, Bongbong did not consider himself subject to the rules binding other Filipinos. Who would dare file a tax case against Bongbong Marcos?

Harry Roque argues that we should not blame Bongbong for the excesses of Martial Law; Bongbong was only 15 years old when father, Ferdinand, issued the decree in 1972. Well, R.A. 9344 defines the age of criminal responsibility at 15 years. Especially galling to get this argument from the spokesperson of an administration that wanted to change the law to reduce the age of criminal responsibility to cover children 12 years of age.  Second, Roque ignores the fact that Martial Law prevailed for fourteen years; Bongbong may not have gained greater wisdom and grace during this period, but he did grow older.  Finally, excusing Bongbong for Martial Law was unnecessary.  Bongbong himself feels no remorse or repentance or need for restitution to atone for Martial Law.  In Bongbong’s revision of history, Martial Law was the greatest blessing bequeathed by Marcos to the country.  Bongbong could declare: “I am the luckiest person that I know  and being a Marcos is part of that and I am very happy that I was born into the Marcos family.” Part of the benefit was exemption from paying taxes? 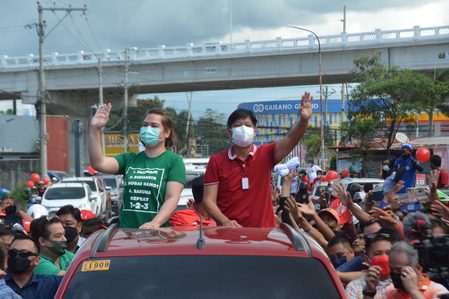 The next president will lead a government in dire need of raising tax revenues from a population battered for two years by the pandemic. We have, currently, as the leading candidate for the presidency, someone who promises to do great things for the country, a convicted tax evader. What degree of moral ascendancy can Bongbong muster to motivate people to pay their taxes? Fortunately, Bongbong’s conviction for tax evasion renders him unqualified to run for the presidency. – Rappler.com