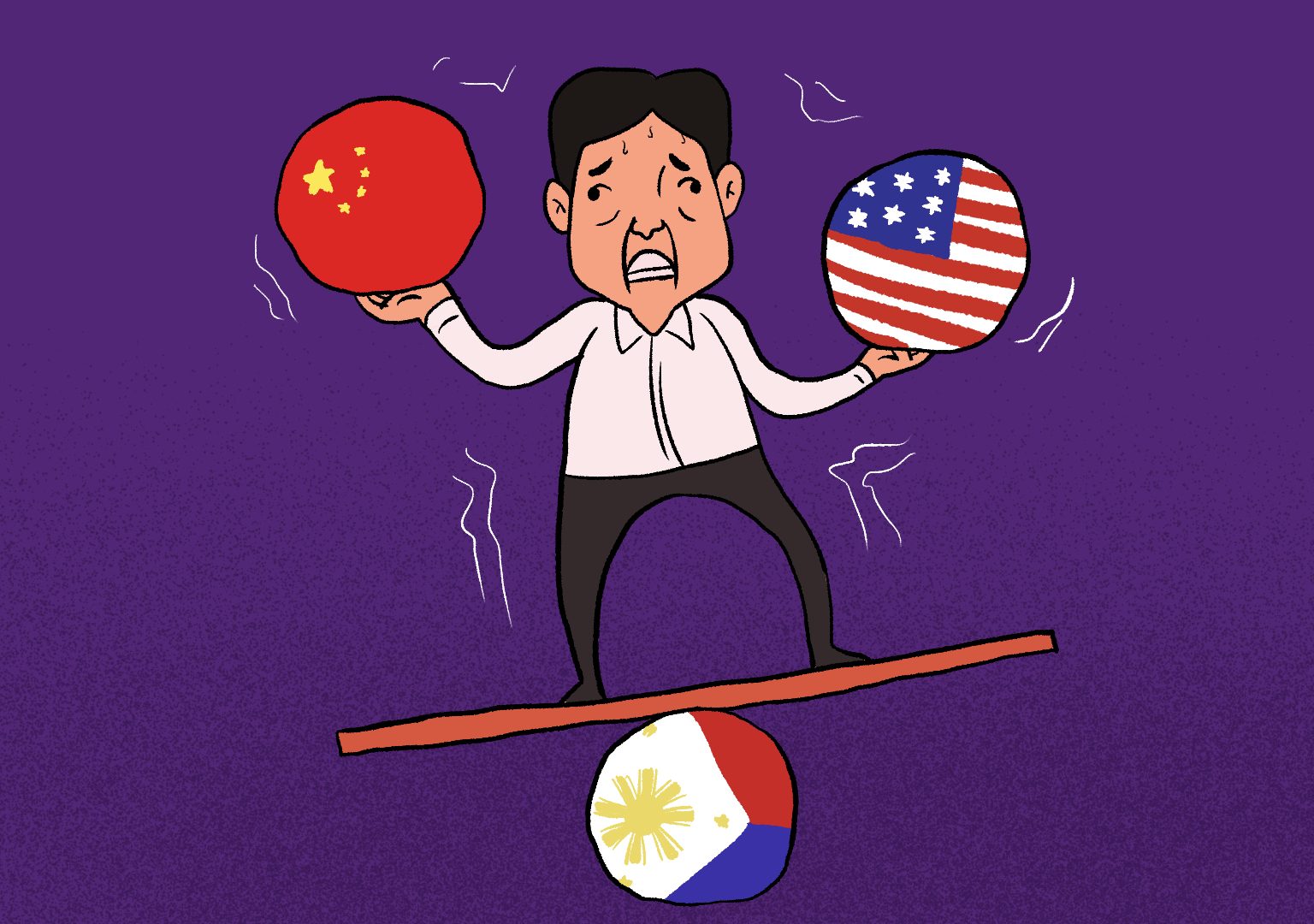 Facebook Twitter Copy URL
Copied
'Unlike Duterte who plays the China card against the US, Marcos Jr. is playing the US card to deal with China'

The Marine Corps of the Philippines and the United States concluded on October 14 the sixth KAMANDAG Exercises or the “Kaagapay ng Mga Mandirigma ng Dagat” (Cooperation of the Warriors of the Sea) Exercises 2022. This year’s exercises that kicked off on October 3 have reaffirmed the continuing relevance of the Philippine-American security alliance amidst global security uncertainties, particularly in the context of continuing tensions in the South China Sea (SCS).

Held in various locations in the Philippines, the KAMANDAG Exercises 2022 established important milestones in Philippine-American military relations as they involved not only 500 members of the Philippine Marine Corps (PMC) and 2,550 personnel of the US Marine Corps (USMC), but also 100 participants from the Republic of Korea Marine Corps (ROKMC) and 50 representatives from the Japanese Ground Self Defense Force (JGSDF). Participants also held an amphibious exercise in Palawan, the Philippine province facing the SCS, with the presence of US Navy Ship Brunswick (T-EPF 6), an American Navy expeditionary fast-transport vessel.

Though the sixth KAMANDAG Exercises were originally bilateral in nature between American and Filipino forces, they became practically “multilateral” with the involvement of “observers” from South Korea and Japan, both American military allies. They focused on maritime security cooperation, especially in littoral protection, territorial defense, and coastal safety that all aimed to strengthen the interoperability of all participating military forces in confronting common threats or adversaries.

The conclusion of the sixth KAMANDAG Exercises clearly demonstrated that the Philippine-American security alliance under President Ferdinand Marcos Jr. would be sustained despite the reputation of the Marcos family of being close with China. In fact, President Marcos Jr.’s visit to New York City on September 19 to 25 already refreshed the Philippines’ longstanding security alliance with the United States when he met President Joe Biden. During their face-to-face meeting, Marcos Jr. acknowledged the paramount role of the US in maintaining regional security in Asia, particularly in the SCS. He told Biden that “the role of the United States in maintaining the peace in our region is something that is much appreciated by all the countries in the regions and the Philippines especially.” Marcos Jr. also stressed, “We have always considered the United States our partner, our ally, and our friend.”

Apparently, Marcos Jr. is revitalizing the Philippine alliance with the US that was downplayed by his predecessor, President Rodrigo Duterte. Biden even admitted that under Duterte, Philippines-US relations suffered some rocky times. But their alliance is so critical that Biden has reassured Marcos Jr.  that the US commitment to the Philippines as an American ally has always been rock solid.

Marcos Jr.’s recent effort to pursue closer ties with the US has been interpreted as the Philippines’ pivot to the US, Manila’s only security ally in the world. As an ally, the Philippines continues to benefit from the American security umbrella in Asia, especially in the midst of growing security tensions in the SCS, where the Philippines commits to defend its territories in the West Philippine Sea (WPS), where the Kalayaan Island Group (KIG) and the Scarborough Shoal are located.

Being an American ally, the US Embassy in Manila says that the Philippines has remained the largest recipient of US military assistance in the Indo-Pacific region despite Duterte’s paradigm shift to China.  In February 2022, the US delivered $1.4-billion worth of planes, armored vehicles, small arms, and other military equipment and training facilities to the Philippines, broken down in Figure 1. At the conclusion of the sixth KAMANDAG Exercises, the US also announced its $100-million foreign military financing to the Philippines in order to support the ongoing modernization of the Armed Forces of the Philippines (AFP).

The US Aid for International Development (USAID) reports that since 2010,  it “has provided more than $342 million in disaster relief and recovery aid and strengthened the disaster risk reduction capacity of over 100 cities and municipalities in the Philippines. This includes relief and recovery efforts after Typhoon Haiyan/Yolanda devastated the country in 2013 and after Super Typhoon Rai/Odette made landfall in 2021. The United States continues to support long-term reconstruction and rebuilding efforts and has allocated over $60 million to support ongoing humanitarian assistance and stabilization funding after the siege of Marawi.”

During the COVID-19 pandemic, the US Department of State underscores that the US has been the Philippines’ strongest partner in countering the COVID-19 pandemic. The US contributed “nearly $38 million in pandemic-related assistance and [provided] more than 32 million vaccines through the COVAX facility (out of more than 69 million total vaccines delivered to the Philippines via COVAX) as of March 2022.”

In other words, pursuing closer ties with the US provides many benefits for the Philippines to advance its national interests. But to say that Marcos Jr. is pivoting to the US as part of its foreign policy is utterly inaccurate. Marcos Jr. is diversifying its relations with major powers by being friendly to all.

As he stressed during his speech at the 77th Session of the UN General Assembly, Marcos Jr.’s foreign policy is being “friendly to all and enemy to none”. This foreign policy enunciation sustains the policy of his predecessor, former President Duterte. But unlike Duterte who plays the China card against the US, Marcos Jr. is playing the US card to deal with China.

Marcos Jr. is not pivoting to the US because China still looms large in the foreign policy agenda of the Philippine government. Marcos Jr. is pursuing closer ties with the US not at the expense of China.

He still has the marching order to shift Philippine relations with China to a higher gear. He even recognizes China as the Philippines’ strongest partner. In his speech during the Award for Promoting Philippines-China Understanding (APPCU) in June 2022, he underscores, “The relationship between the Philippines and China is a very important relationship that we should continue to evolve as the years go by.” During his meeting with Chinese Foreign Minister Wang Yi in July 2022, Marcos Jr. exclaimed, “Let’s have cultural exchanges, educational exchanges, even the military, if that will be useful. Of course, the GTG (government-to-government [partnership]) has always been there, the private sector, and joint ventures have also been there. But I think that the more that we do, the more it will help resolve the issue,” referring to territorial conflict and maritime jurisdictional dispute in the South China Sea.

In fact, there are talks for Marcos Jr. to have a state visit to China in November 2022 to promote comprehensive strategic cooperation in light of the third term of President Xi Jinping as a result of the recently concluded 20th Congress of the Chinese Communist Party (CCP). Like the US, China continues to be one of the Philippines’ largest trading partners. In short, the Philippines under Marcos Jr. is not pivoting to the US against China. The Philippines is just pragmatically balancing its relations with the US and China in order to get the best of both worlds for the advancement of Philippine national interests, the cornerstone of an independent foreign policy that is based on strategic flexibility if not strategic ambiguity. This is called flexible foreign policy, practiced by most members of the Association of Southeast Asian Nations (ASEAN) like Indonesia, Malaysia, Singapore, and Thailand, as well as other developing countries like Libya and Pakistan.