[OPINION] The Lubao Fault at BNPP, and the volcanic threats there 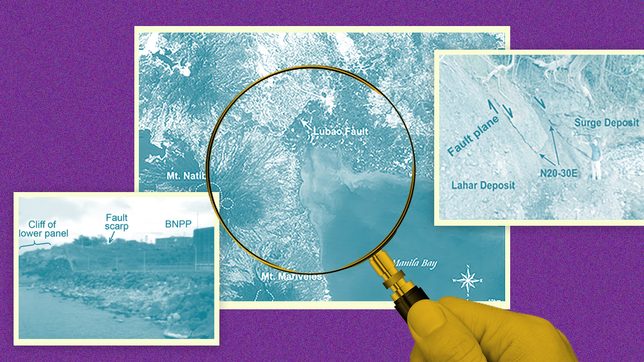 Facebook Twitter Copy URL
Copied
'[A] future eruption could break out somewhere else on [Mount] Natib, along some other fracture. Closer to, above, or under BNPP, perhaps?'

The following is the seventh in a series of excerpts from Kelvin Rodolfo’s ongoing book project Tilting at the Monster of Morong: Forays Against the Bataan Nuclear Power Plant and Global Nuclear Energy.

Our last foray describes how the Lubao Fault was found and was verified with seismic profiling. Here, we look at the fault as it passes through Mount Natib.

Mahar Lagmay led the only detailed study of southwestern Mt. Natib. No geologist could have been better trained for the job. Mahar earned his Bachelors and Masters degrees at UP Diliman, his doctorate at Cambridge in England. His work on volcano-fault interaction is internationally recognized. Now he heads the University of the Philippines Resilience Institute and Project NOAH, which concentrates on mitigating natural hazards.

Mahar and Fernando Siringan are the only two geologists in the National Academy of Science and Engineering.

After the controversy over activating BNPP started in late 2008, Mahar, as a concerned citizen, decided to see for himself. Fifteen young geologists volunteered to work with him. With regret, I did not participate except for visiting BNPP during one of their field campaigns. I had already vigorously opposed activating BNPP and did not want to open the study to charges of bias.

The group began mapping in May 2009; their fifth and last field campaign was in January 2010. Unending downpours hampered three of their campaigns. We owe them a debt of gratitude because Natib’s geology is so hard to map. The upper slopes are steep and densely vegetated, their few exposed rocks deeply weathered. And so most of the data were gathered on Natib’s middle and lower slopes.

Precise satellite imagery guided their work. The Lubao Lineament continues through Natib, not too different from the cruder image that Carlo Arcilla used in 2005 to argue that BNPP is safe because he had misplaced it eight kilometers to the north.

Mahar’s more precise delineation shows the Lubao Fault extending southwestward through Natib as two parallel lineaments, two more through Natib’s two calderas, and two closely spaced ones at Napot Point and BNPP. From there, the lineament extends into the seafloor as a submarine ridge 10 kilometers long.

The team compared regional radar images taken from the west by satellites in 2003 and 2006, to evaluate whether the sides of the fault are moving relative to each other. Initial data from Pampanga were dominated by the subsidence from overuse of groundwater, but the western side moved west by 2.5 centimeters a year.

But these are just remote sensing data! They must be “ground-truthed” to be worth anything. The Lubao Lineament became a known fault only after Lea Soria’s fieldwork confirmed it so.

Natib’s northeastern and central lineaments are not yet ground-truthed, but the fractures that shape the east coasts of Napot and Cabigo Points have been. This photo at Cabigo Point shows ancient pyroclastic flows that were brought down along a fault surface to rest against an older lahar deposit:

Radioactive radon gases are produced by uranium decaying in rocks deep underground. Radon emerges more easily out of rocks crushed by faulting.  Five kilometers upslope from BNPP, the group measured radon along a traverse across the faults, shown in the second map above. Radon emissions increased as much as five times at the fractures. The values were similar to those at the West Marikina Valley Fault where it disrupts roads in Metro Manila’s Pasig City.

The Lubao lineament and the Napot Point and Cabigo fractures are faults.  And so the lineaments between them are likely also parts of the fault, as future ground-truthing may demonstrate.

Pyroclastic flow and surge deposits at BNPP and its surroundings

In Foray 3, we looked at pyroclastic flows and surges, the deadliest of volcanic hazards. There is no question that they seriously threaten BNPP. The Lagmay study shows that the plant was built on the deposits of four such events. Any chance a fifth might come along sometime, with or without BNPP?

Pyroclastic deposits are everywhere, cropping out abundantly less than six kilometers east-northeast of BNPP at the Lingatin quarry north of BNPP, and at Yala Point south of it. These at Napot Point itself are pyroclastic deposits that, while still hot, baked the tops of the older ones they rest on. The paired photos here were taken 200 meters west of the BNPP office.

The parasite that bled Natib

One of the most interesting Lagmay group volcanic findings is less than six kilometers east-northeast of BNPP.  It is labeled “Parasitic” Eruptive Center on my second map, above. The Lagmay group calls the feature a “satellite cone;” I prefer its more picturesque name.

As a volcano like Natib grows, its weight presses down more, making it harder for magma to rise. But fractures in a volcano can provide shortcuts to the surface for magma.

What this means is that a future eruption could break out somewhere else on Natib, along some other fracture. Closer to, above, or under BNPP, perhaps?

Finally, in ancient lahar deposits exposed a half kilometer north of BNPP along the coast, the group identified evidence of a different source of earthquakes that threatens BNPP: “reverse” faults.

Most commonly, rocks that faults displace vertically have been stretched, pulled apart by horizontal forces. Rocks are rigid, so the way they stretch is to break, then for one side to slide down along the fault, pulled by gravity. So we call them “gravity faults.” They are also called “normal faults” because they are most common; gravity, after all, operates everywhere.

But if the rocks are broken by horizontal forces that compressed and shortened them, one side is pushed up along the fault against the force of gravity, which is why they are called reverse faults.

The BNPP site once experienced an earthquake that faulted the rocks, suddenly forcing hanging walls upward against the force of gravity. If this were to happen again, BNPP would be squeezed between gravity and opposing upward earthquake forces, with catastrophic results.

A more complete discussion of this requires another foray. For now, let’s just say that the simplest way to explain the reverse faults is faulting on a gigantic scale. The slab of rock about 100 kilometers thick that includes western Luzon is being forced to move slowly, about five centimeters per year, northwestward against the slab of rock that underlies the South China Sea, forcing it to thrust underneath Luzon. The Manila Trench, a long, deep furrow, marks where this begins. This huge reverse fault is called a “megathrust.”

Lastly, here’s a map of all the regional earthquakes from July 19, 1956 to November 4, 2019. What does it imply about the seismicity of the Lubao Fault and BNPP’s safety?

Pinatubo, Natib and Mariveles volcanoes are three major products of the megathrust. How and why they exist, we have yet to explain. We will, in our next foray, with a grand theory called “plate tectonics.” The megathrust is also responsible for the strongest, most devasting threats to BNPP, as we will see later. – Rappler.com