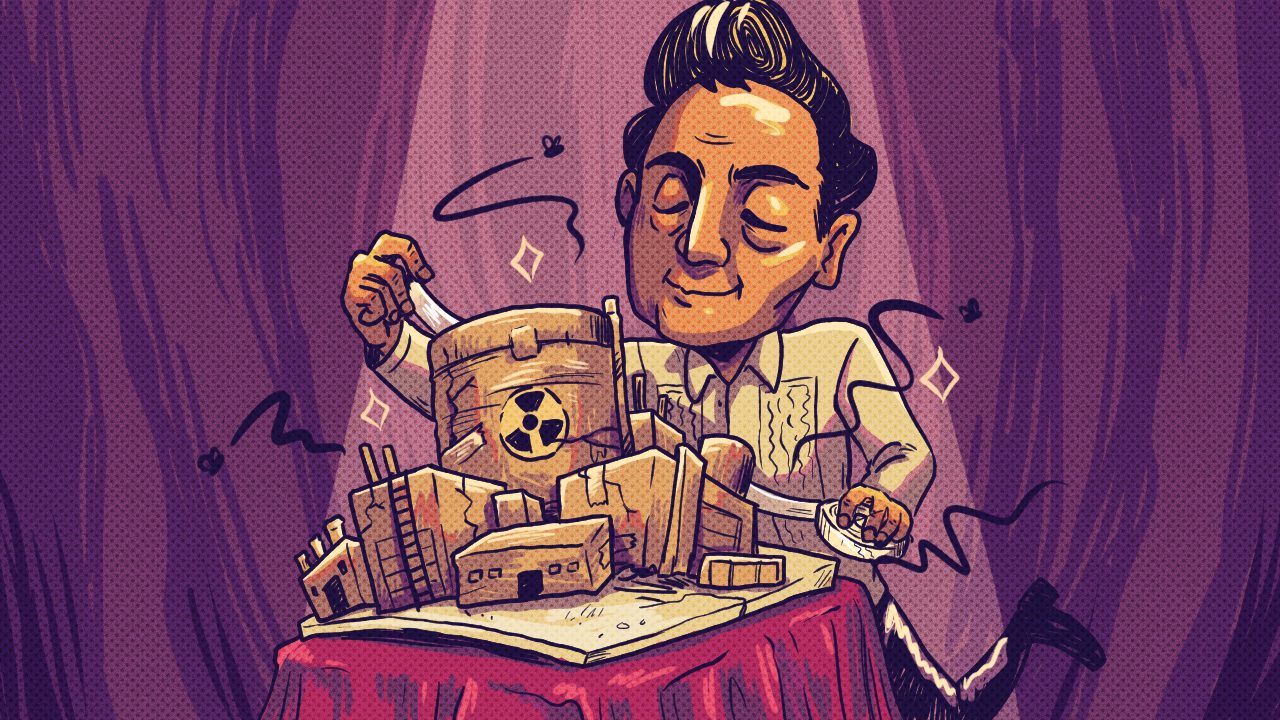 The following is the tenth in a series of excerpts from Kelvin Rodolfo’s ongoing book project Tilting at the Monster of Morong: Forays Against the Bataan Nuclear Power Plant and Global Nuclear Energy.

A thoughtful congressman, Roilo Golez, once cautioned that the Bataan Nuclear Power Plant’s (BNPP) risks were magnified by a “national lack of a culture of safety that is observed in Japan, the United States, and Western Europe.” The BNPP has been accursed with that lack from the very beginning, and remains so today.

Cojuangco and other nuclear proponents casually dismissed the geohazards at Napot Point, carrying on Ferdinand Marcos’ hurried carelessness. He decided to build nuclear reactors in 1973 and forced construction to begin in 1976 before the natural hazards had been properly assessed. Dictators are impatient and driven by a sense of invincible power. That evaluation should have taken at least five years. But it remains unfinished today.

In January 1977, after the BNPP construction had already started, nuclear technologists Elmer Hernandez and Gabriel Santos, Jr. submitted an internal report on the geohazards there. True heroes, they were more worried about public well-being than afraid of dictatorial displeasure. They expressed concerns that Forays 7 and 9 have confirmed. Excerpts:

2. The proposed site is literally bracketed by significant and very strong (high magnitude) historical earthquakes…within a 100-kilometer radius. In fact…one…occurred (1970) within 1-2 km of the proposed site itself in Napot Point.

3. The probability of an epicenter of an earthquake occurring at the site is unacceptably very high. Covering a span of 74 years, 49 significant earthquakes occurred in the above area, one of which occurred within 1-2 kilometers of the proposed site itself…”

4. Known significant and major earthquakes with magnitudes greater than 8 were apparently overlooked and not considered in the computation of the shutdown earthquake design basis…

5. Earth satellite data…suggest the presence of a lineament in the site itself.  Ground magnetometer data…appear to substantiate the existence of a probable fault at the proposed plant location.

….The above review has revealed the high risk potential for the protection of health and safety of the public if the proposed site is accepted. High probability earth motions associated with earthquakes due to the Manila Trench-West Luzon Trough displacements and presence of a probable fault in the plant location itself may lend to structural failures causing the release of radioactive materials from the nuclear power plant or may cause extensive damage to the plant.

But Marcos was not to be denied, and the construction continued.

Nevertheless, the Philippine Atomic Energy Commission, still worried, asked Ernesto Sonido, the geophysicist at UP Diliman, to investigate further. He reported in January 1979 that the National Power Corporation was too casual, did not consider how hard it was to see fault evidence in trenches they had dug through thick overburden and easily “healable” rocks. Their sloppiness included a 90° mistake in the direction of one trench. He also complained that ongoing construction had already destroyed or obscured much field information.

But he and John Palmer, the groundwater consultant of the contractor firm Ebasco, did agree onsite that “the postulated fault is a fault zone with a width equal to the width of [a] river along the fault…. Numerous seepages along fractures in otherwise impermeable rocks, and variable depths of a ‘tuff’ horizon in more than 30 boreholes at the plant site…suggest that the area had been tectonically active…” The “river” is probably the one from the caldera that is aligned with the Cabigo coast.

The Aquino administration mothballed the nuclear plant following the Chernobyl disaster, and commissioned a technical audit from the BNPP from NUS Corporation, a US nuclear consultancy firm. An NUS multidisciplinary team of over 15 nuclear experts from the US, Germany, Brazil, South Korea, and Japan evaluated the field implementation of the plant design, quality assurance and control, and construction practices.

A Senate ad-hoc committee on the BNPP also commissioned a technical audit. From 1988 to 1990 over 50 nuclear experts from the US and Europe made a much more extensive audit that cost the government $10 million. The study was kept confidential because of the pending litigation vs Westinghouse. Its many volumes were supposed to remain locked up in the Senate vaults.

Nicanor Perlas, a technical consultant for both studies, says the experts concluded that the project’s Quality Assurance Program was sloppy and below regulatory standards, and couldn’t determine if the strict specifications for constructing a nuclear plant were met.

Perlas wanted the studies made fully available to the public to save much unnecessary and expensive duplication. Filipino taxpayers paid for them, and are entitled to their full perusal and proper use.

But in 2009 it turned out, mysteriously, that neither the Senate nor Malacaňang could find the voluminous reports of these studies. Hmm…

Fortunately, many of the details that those missing reports should contain were published by Fortune Magazine in 1986, while memories of the BNPP project were still fresh. Anyone who wishes to comment on the safety of the BNPP owes it to the public to read it.

The article relates in horrifying, sometimes amusing detail, the feeding frenzy of American companies and Marcos cronies alike over the billions of dollars involved.  It also tells how “in March 1976, Westinghouse began clearing the site before Napocor had a construction permit from the Philippine Atomic Energy Commission,” and how Ebasco contractors “were still performing onsite tests to determine whether the site was safe.

It echoed Sonido’s complaint: “The work began so early that the bulldozers rumbling around the site interfered with the seismic tests…”

NRC and Westinghouse safety specialists describe William Albert as one of the best inspectors the agency ever had. He spent July 1979 to July 1981 and October 1983 to March 1985. Among his findings:

In a system of thousands of hangers for water pipes, “a badly welded hanger could allow a pipe to burst, causing a major accident or the failure of an essential safety system. The welders broke many rules.

“Welders use a metal called weld rod, which in humid Bataan must be kept dry…in a small, box-shaped electric oven…. But the welders at the plant often played a game: they would see how long they could fool inspectors by keeping their ovens unplugged…did not want to bother stringing extension cords to the ovens.”

When Westinghouse sped up construction, welders worked around the clock, one for 26 hours. “They let me get an hour of sleep now and then,” the worker explained. Says Albert: “There’s no way a welder can work for 26 hours straight and do quality work.”

Westinghouse claimed that all the welds were verified and fine. But record keeping was sloppy, some illegible. Those for a grossly misaligned cooling-tower fan had paperwork for properly installed couplings but not for bungled ones.

There is not enough space to repeat much more of the multitude of construction errors Albert describes. You can access the Fortune article here.

Prepare to be both horrified and amused. – Rappler.com