Dec 12, 2013 12:30 AM PHT
Rappler.com
Facebook Twitter Copy URL
Copied
Time Magazine names the head of the Catholic Church as its Person of the Year 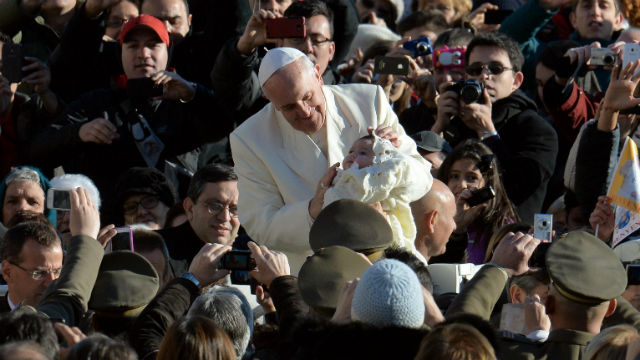 NEW YORK, USA – Time Magazine on Wednesday, December 11, named Pope Francis as its person of the year for 2013.

“Rarely has a new player on the world stage captured so much attention so quickly—young and old, faithful and cynical—as has Pope Francis,” wrote Time Managing Editor Nancy Gibbs.

Time noted how the pope has managed to help create a focus on pressing issues like wealth accumulation and poverty, fairness and justice, transparency, globalization, and the role of women in his 9 months as the leader of the world’s Catholics, urging the 1.2-billion-strong flock to be more engaged especially in helping the world’s needy.

Francis has shifted the tone of discussion among both casual and devout believers from one that favors legalism – which focuses on what he calls “small-minded rules” – to one of compassion, said Gibbs.

“It is my duty, as the Bishop of Rome, to be open to suggestions which can help make the exercise of my ministry more faithful to the meaning which Jesus Christ wished to give it,” the pope wrote in his first “apostolic exhortation.”

Gibbs, in explaining the magazine’s choice for 2013, wrote that the pope “has become a new voice of conscience.”

“When he rejects the pomp and the privilege, releases information on Vatican finances for the first time, reprimands a profligate German Archbishop, cold-calls strangers in distress, offers to baptize the baby of a divorced woman whose married lover wanted her to abort it, he is doing more than modeling mercy and ­transparency,” Gibbs wrote. “He is ­embracing complexity and acknowledging the risk that a church obsessed with its own rights and righteousness could inflict more wounds than it heals.”

The pope, she added, believes the church to be a field hospital where the first duty is to take care of the wounded.

Six days prior to being declared as the magazine’s pick, Pope Francis set up a committee to fight child sex abuse in the Catholic Church and give pastoral care to victims.

Not everyone, however, views the pope’s actions as fitting for his post. Francis’ comments on not judging homosexuals and atheists being moral has raised a few eyebrows.

“The giddy embrace of the secular press makes Francis suspect among traditionalists who fear he buys popularity at the price of a watered-down faith,” wrote Gibbs.

“But what makes this Pope so important is the speed with which he has captured the imaginations of millions who had given up on hoping for the church at all,” wrote Howard Chua-Eoan and Elizabeth Dias in a separate Time article.

“In a matter of months, Francis has elevated the healing mission of the church — the church as servant and comforter of hurting people in an often harsh world — above the doctrinal police work so important to his recent predecessors,” they added.

According to Time Magazine Deputy Managing Editor Radhika Jones, the Person of the Year represents both “where the world is” and “where it’s going.”

“Someone, or in rare cases, something, that feels like a force of history.” – with reports from Agence France-Presse/Rappler.com

(Watch below Time Magazine’s video of Gibbs and Jones revealing the influencers who shaped 2013.)