More than 9 months of bloodshed in Ukraine 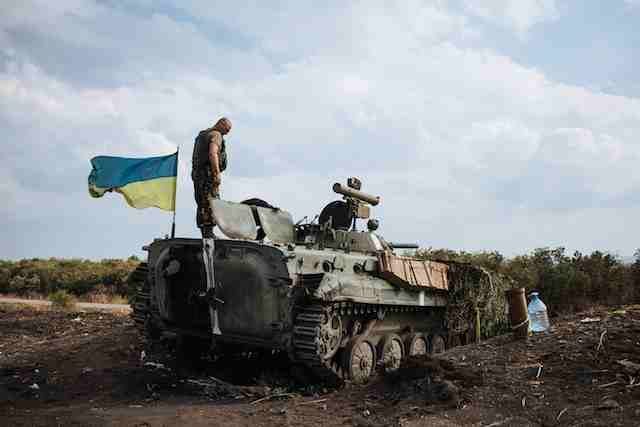 Facebook Twitter Copy URL
Copied
Here are key dates in the conflict since pro-Moscow separatists launched an uprising that the Organization for Security and Cooperation in Europe (OSCE) estimates has killed more than 5,000 people since April 2014

KIEV, Ukraine – Tension is again mounting in Ukraine after a weekend rocket assault on the strategic government-held port city of Mariupol that left 30 dead and 95 injured, as separatists threatened a new offensive.

Here are key dates in the conflict since pro-Moscow separatists launched an uprising that the Organization for Security and Cooperation in Europe (OSCE) estimates has killed more than 5,000 people since April 2014.

April 13: Kiev announces the launch of an “anti-terrorist” operation in the east.

May 11: Voters call for independence in referendums in Lugansk and Donetsk, rejected as illegitimate by Kiev and the West.

May 25: Ukraine’s presidential election is won by Petro Poroshenko.

June 27: The EU and Ukraine sign the association agreement whose rejection had sparked the initial unrest.

July 29: The EU and the United States broaden sanctions on Russia.

August 25: Rebels mount a counter-offensive in the southeast, reportedly backed by Russian troops and heavy weapons.

October 26: Pro-Western parties win the most seats in an election boycotted in the east.

November 2: Separatists in eastern Ukraine vote in Russian-backed leadership elections that Kiev and the West refuse to recognise.

December 9: A new ceasefire is declared as part of a surprise agreement between Kiev and the separatists.

December 24: A new round of talks is held in Minsk between Kiev, Moscow, the pro-Russian separatists and OSCE envoys. An exchange of prisoners follows but the negotiations get bogged down.

January 13: A rocket slams into a bus carrying civilians, killing 13, close to a Ukrainian army checkpoint in Volnovakha, south of Donetsk.

January 20: Ukraine accuses Russian forces of attacking its soldiers after crossing the border. Poroshenko cuts short a visit to Davos due to the “worsening situation” in the east.

January 21: Poroshenko says there are more than 9,000 Russian soldiers in eastern Ukraine to back up the separatists.

In Berlin, foreign ministers from France, Germany, Russia and Ukraine call for an end to the fighting and a withdrawal of heavy weapons.

January 22: Ukrainian troops pull out of most of Donetsk airport on the same day that around 40 people are killed, including eight in a trolleybus shelling in Donetsk.

January 24: A rocket attack leaves 30 people dead in the strategic port city of Mariupol, heightening fears of an imminent rebel offensive against the last government-held city in the separatist east.

January 25: Poroshenko chairs an emergency security meeting as US President Barack Obama pledges to intensify pressure on Russia over the latest violence. – Rappler.com