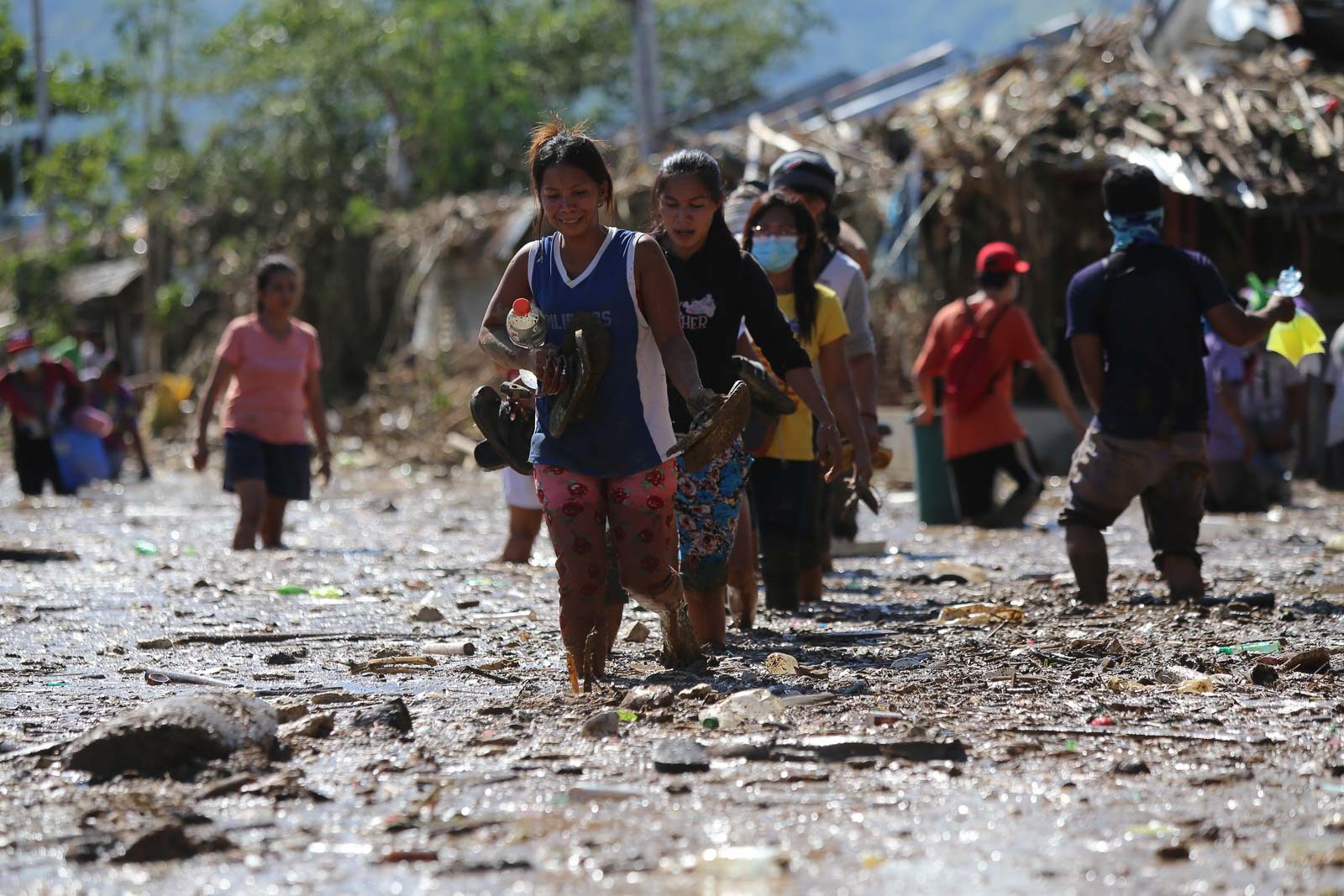 WADE. Residents of Southville Brgy San Jose Rodriguez, Rizal walk through a muddy road a day after the onslaught of Typhoon Ulysses (Vamco) on Friday, November 13, 2020.

Facebook Twitter Copy URL
Copied
'Our governments are too slow in responding,' says Lidy Nacpil, coordinator of the Asian Peoples' Movement on Debt and Development

At-risk communities in disaster-prone Asia are warning that they have “no hope” of coping with more climate catastrophes and some even fear “extinction” if the world does not act quicker, after the UN said global warming was close to being out of control.

Climate experts are also concerned the effects could worsen inequalities in a region where many people rely on natural resources for their livelihoods, pushing more into poverty.

The UN climate science panel on Monday, August 9, warned in a major report that the average global temperature will likely cross the 1.5-degree Celsius warming threshold within the next 20 years – bringing stronger droughts, heatwaves, floods, and storms.

Such devastating impacts are already being felt in Asia-Pacific, the world’s most disaster-prone region, which saw a record number of climate-related emergencies in 2020, according to a Red Cross study, affecting tens of millions of people.

“Our governments are too slow in responding,” said Lidy Nacpil, coordinator of the Asian Peoples’ Movement on Debt and Development, an alliance representing more than 50 groups in Asia campaigning on climate change and other issues.

Nacpil said the impacts outlined in the new UN report are already a “regular feature of life” in her country, the Philippines, where over the last decade people have faced more powerful typhoons and increasingly frequent floods.

“If (governments’ actions are) as slow as today, then we have no hope, no chance to be fully prepared for this,” she told the Thomson Reuters Foundation by phone from Manila.

“There will be unavoidable damages. Where can you relocate if you are coastal communities and ravaged by storm surge like on many islands in the Philippines? There’s nowhere to go.” Former Maldives President Mohamed Nasheed said the Indian Ocean archipelago on the frontline of rising seas is already grappling with severe impacts and called for action before it is too late.

One of the world’s lowest-lying countries, more than 80% of the Maldives’ land is less than 1 meter (3.3 ft) above mean sea level, making its population of about 530,000 people extremely vulnerable to storm surges, sea swells and wild weather.

The UN report warned Greenland’s ice sheet is “virtually certain” to continue melting and raising sea level, which will continue to increase for centuries to come as the oceans warm and expand.

“This report is devastating news for the most climate-vulnerable countries – like the Maldives – because it confirms we are on the edge of extinction,” Nasheed said.

Written by 234 scientific authors from around the world, the report by the Intergovernmental Panel on Climate Change (IPCC) comes just three months before a major UN climate conference known as COP26 in Glasgow, Scotland.

Nations are under pressure to commit to far more ambitious climate action by then, and provide substantial financing to push it through, with countries’ pledges to cut emissions as yet inadequate to meet global goals to limit warming.

Home to about 60% of the world’s population, the Asia-Pacific region has borne the brunt of climate disasters, with many people living in vulnerable conditions due to poverty and poor urban planning.

Sea level around Asia has increased faster than the global average and will continue to rise, the IPCC report said. It also predicts the region will suffer more intense heatwaves and heavier rainfall, while glaciers shrink further by mid-century.

The stark warning on climate change from the IPCC has sparked worries that runaway warming could push millions of people in the region – from fishermen to farmers, who depend on a healthy environment for a living – into poverty and hardship.

“The report is grim reading and the strongest warning yet for Asian countries,” said Danny Marks, assistant professor of environmental politics and policy at Dublin City University.

“In Asia, where there is widespread inequality and where the majority of the poor rely on natural resources to sustain their livelihoods, (they) will be affected the most,” he added.

He urged China to decarbonise quickly, noting that without greater action from China, the world’s largest emitter, it “will be close to impossible” to reduce global emissions fast enough. Besides China, green groups also hope the IPCC report will spur Australia, which has been criticized for being a laggard on climate change, to take more aggressive action to cut emissions.

“(Australian premier) Scott Morrison’s refusal to commit to a net-zero target – and instead just hope for the best – flies in the face of this imminent threat,” said Gavan McFadzean from The Australian Conservation Foundation, an environmental group.

“In many cases, those least responsible will bear the greatest burden, such as our Pacific island neighbours, who face an existential threat from sea level rise,” said the climate change programme manager.

Asian governments must also respond to the IPCC warning by accelerating plans to close coal-fired plants and phase out dirty fuels that damage lives and livelihoods, said Li Shuo, a policy advisor at Greenpeace East Asia.

“In this particular regard Asia is lagging behind compared to the rest of the world…. It needs to catch up with the global momentum,” he said by phone from Beijing.

Coal remains a mainstay for power generation in Asia, which accounts for 75% of global coal demand, according to the International Energy Agency.

Li said the key message in the IPCC report was that “every single degree (of warming) matters” and could mean “life and death for people across the world.”

“We really need to put all hands on deck and to act fast enough to prevent the worst of climate change,” he added. – Rappler.com