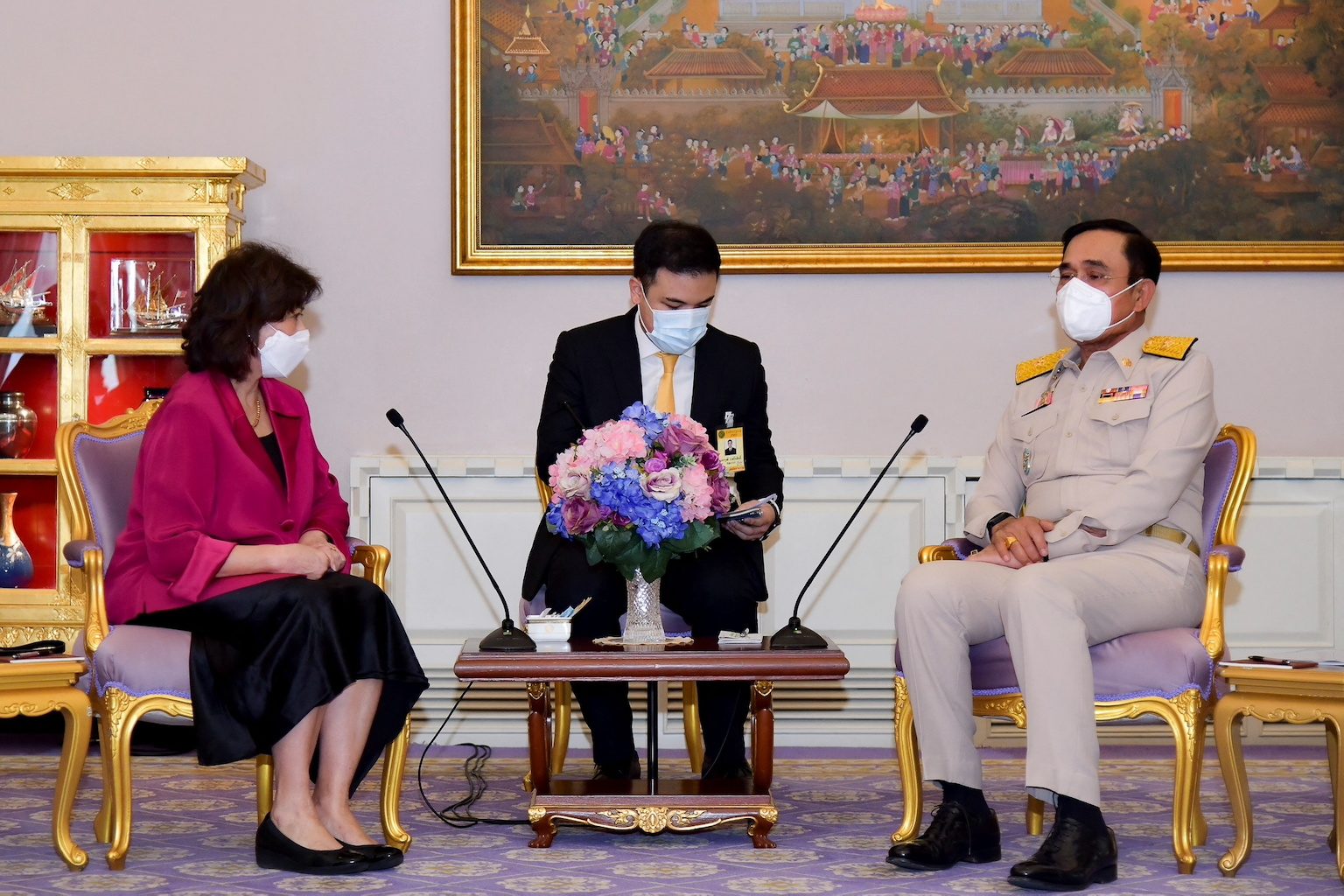 Thailand's Prime Minister Prayuth Chan-ocha meets with the U.N. Secretary-General's special envoy on Myanmar, Noeleen Heyzer at the Government House in Bangkok, Thailand, January 17, 2022. THAILAND GOVERNMENT HOUSE/Handout via REUTERS ATTENTION EDITORS - THIS IMAGE WAS PROVIDED BY A THIRD PARTY. NO RESALES NO ARCHIVE.

BANGKOK, Thailand – A United Nations envoy on Monday, January 17, called on Thailand’s support to prevent a deterioration in the crisis in neighboring Myanmar and welcomed assurances that refugees fleeing military operations would be protected by the Thai government.

Noeleen Heyzer, the U.N. secretary-general’s special envoy on Myanmar, met with Thai Prime Minister Prayuth Chan-ocha to court support for international efforts to help displaced people and press Myanmar’s junta to commit to a five-point peace plan it agreed to with the Association of Southeast Asian Nations (ASEAN).

“The prime minister has an important role in preventing further deterioration of the crisis in Myanmar, where an implosion would bring further instability to an already volatile border area,” Heyzer said in a statement.

Myanmar’s military has longstanding ties with Thailand, which experts say has been measured with its criticism of the junta, concerned that it could get flooded with refugees if the army steps up operations against opponents. Thousands of Myanmar civilians have fled into Thailand since clashes near the border erupted after a coup last year. More than 1,300 people are still in a Thai shelter, according to official figures.

Myanmar’s military has been fighting on multiple fronts since seizing power last year, cracking down with deadly force on protests while intensifying operations against ethnic minority armies and newly formed militias allied with the ousted government.

The junta has defended the operations as necessary to fight “terrorists”.

Prayuth, a retired general who led a coup in 2014, said Myanmar’s problems were complex and its situation should be addressed “gradually with understanding and through building trust with Myanmar’s leader.”

Prayuth told Heyzer Thailand had a “humanitarian area” and refugees were returned only on a voluntary basis.

Several international organizations have told Reuters they have no access to that area.

Ratchada Thanadirek, a government spokeswoman, declined to comment on the access issue, but said Thailand provides assistance based on international humanitarian principles.