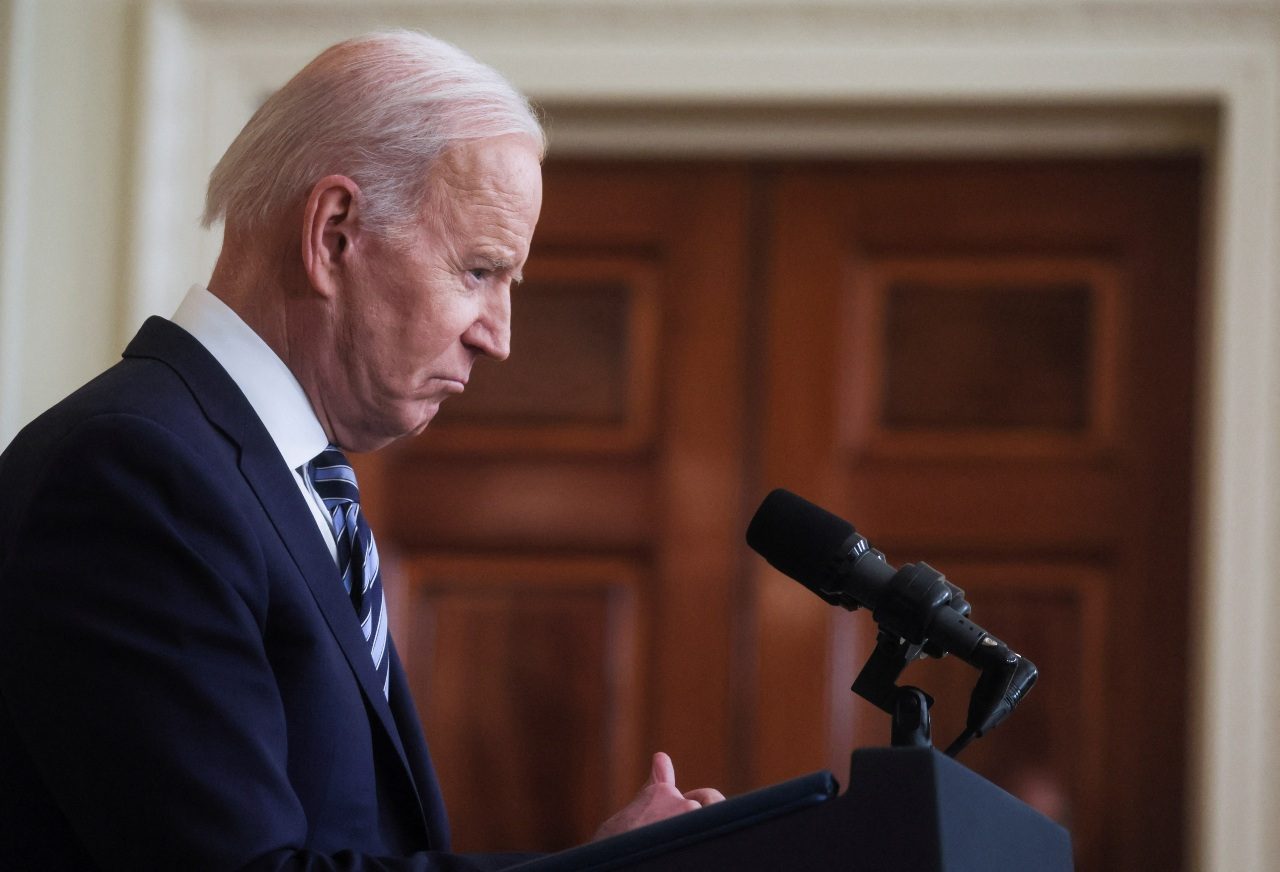 ON UKRAINE. US President Joe Biden delivers remarks on Russia's attack on Ukraine, in the East Room of the White House in Washington, US, on February 24, 2022.

US President Joe Biden on Thursday, February 24, said any country that backed Russia’s onslaught in Ukraine would be “stained by association,” after China rejected calling Moscow’s move an invasion and instead urged all sides to exercise restraint.

Ukrainian forces battled Russian invaders on three sides after Moscow mounted an assault on Ukraine by land, sea and air in the biggest attack on a European state since World War Two.

Biden, speaking to reporters at the White House where he unveiled tough new sanctions on Russia coordinated with allies, said Russian President Vladimir Putin’s actions represented a dangerous moment for freedom around the world.

“Putin will be a pariah on the international stage. Any nation that countenances Russia’s naked aggression against Ukraine will be stained by association,” Biden said without naming China.

Asked if he was urging China to isolate Russia, Biden said: “I’m not prepared to comment on that at the moment.”

Biden said Putin’s action “betrays a sinister vision for a future of our world; one where nations take what they want by force.”

White House spokeswoman Jan Psaki told a later news briefing “this is really a moment for China, for any country, about what side of history they want to stand on here.”

She noted that Secretary of State Antony Blinken had spoken to his Chinese counterpart about Ukraine this week and that Biden was “certainly open to speaking with his counterpart,” referring to Chinese leader Xi Jinping.

However, she added: “I don’t have any prediction of that at this point in time.”

Some geopolitical analysts said Russia’s action could embolden China over Taiwan, a democratically governed island Beijing says is part of China and has vowed to reclaim by force, if necessary.

Russia attacked Ukraine three weeks after Putin met with Xi Jinping in the run-up to the Beijing Winter Olympics that ended on Sunday, February 20. The two announced a strategic partnership aimed at countering US influence and said they would have “no ‘forbidden’ areas of cooperation.”

Ahead of Biden’s remarks on Ukraine, Chinese foreign ministry spokeswoman Hua Chunying called on “all sides to exercise restraint to prevent the situation from getting out of control,” but bridled at journalists’ characterization of Russia’s actions.

“This is perhaps a difference between China and you Westerners. We won’t go rushing to a conclusion,” she said.

“Regarding the definition of an invasion, I think we should go back to how to view the current situation in Ukraine. The Ukrainian issue has other very complicated historical background that has continued to today. It may not be what everyone wants to see.”

Wang said that the Ukraine issue had a “complex” history and reiterated that China understands what it called Russia’s “legitimate concerns” on security, the ministry said. Xi and Putin have developed a close partnership, but Russia’s actions in Ukraine put China, which has an oft-stated foreign policy principle of non-interference, in an awkward position, international relations experts said.

Asked if Putin had told China he was planning to invade Ukraine, Hua said Russia, as an independent power, did not need to seek the consent of China.

“It independently decides and implements its own diplomacy and strategy according to its own strategic judgment and interests,” she said.

“And I would also like to add that every time the heads of state meet, they will of course exchange views on issues of common concern.”

China has been expected to back Russia diplomatically and perhaps economically over Ukraine, but not militarily. Hua, in response to a question, said China had not provided Russia with any military support.

On Wednesday, February 23, a US State Department spokesperson accused China and Russia of working together to create a new “profoundly illiberal” world order, of which Moscow’s actions towards Ukraine were just a part.

Washington has warned Chinese firms they would face consequences if they sought to evade export controls imposed on Moscow.

A senior official in the Biden administration told reporters on Thursday that China had seemed to go close to endorsing Russia’s actions and many countries would be watching how Beijing votes when the a UN Security Council considers a resolution on the issue on Friday, February 25.

The official said Russia’s actions “carry risks for China along with everyone else” and added: “It’s not in China’s interest to endorse a devastating conflict in Europe and defy the principles of sovereignty and territorial integrity it claims to hold dear.”

Hua called on Europe to reflect on how it can better protect its peace and accused some countries of “following the US in fanning the flame.”

“We object to any action that hypes up war,” she said. – Rappler.com