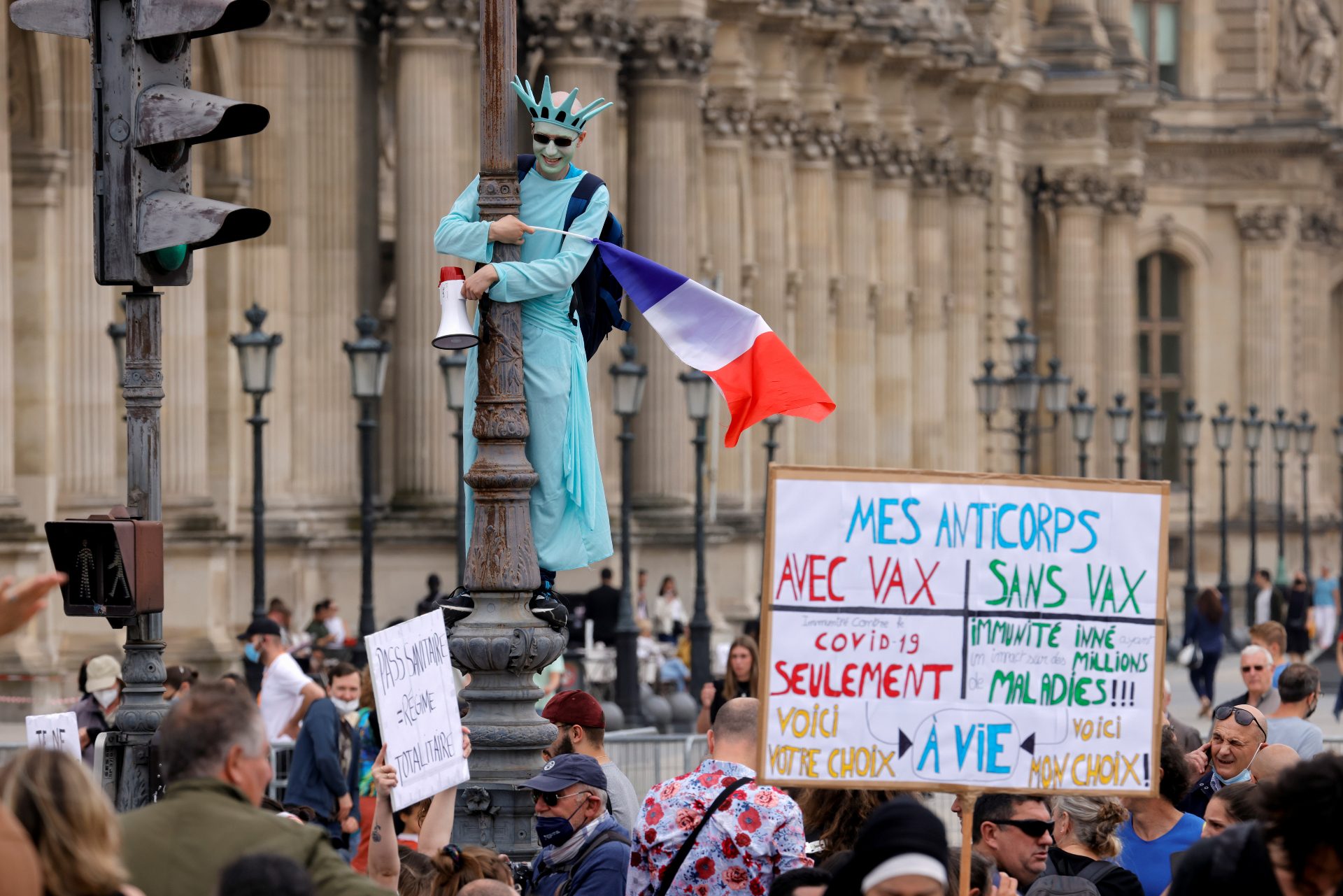 VACCINE PUSH. A demonstrator dressed as the statue of Liberty takes part in a protest against the new measures announced by French President Emmanuel Macron to fight the coronavirus disease outbreak, in Paris, France, July 17, 2021.

Facebook Twitter Copy URL
Copied
'Everyone is sovereign in his own body. In no way does a president of the Republic have the right to decide on my individual health,' says a protester

Thousands marched across France on Saturday, July 17, to protest against President Emmanuel Macron’s plans to force vaccination of health workers and require a COVID-19 free certificate to enter places such as bars, restaurants, and cinemas.

Macron this week announced sweeping measures to fight a rapid surge in coronavirus infections, which protesters say infringe the freedom of choice of those who do not want the vaccination.

The measures had already prompted demonstrations earlier this week, forcing police to use tear gas to disperse protesters.

“Everyone is sovereign in his own body. In no way does a president of the Republic have the right to decide on my individual health,” said one protester in Paris who identified herself as Chrystelle.

Marches, which also took place in France’s largest cities such as Marseille, Lyon, and Lille as well as many smaller centers, also included “yellow vest” protesters seeking to revive the anti-government movement curbed by coronavirus lockdowns.

Visiting a center in Anglet in southwestern France, Prime Minister Jean Castex said vaccination, which is not mandatory for the general public, for now, is the only way to fight the virus.

“I hear the reluctance that arises but I think that we must at all costs convince all our fellow citizens to be vaccinated, it is the best way to cope with this health crisis,” Castex said.

Despite the strength of the protests, an Ipsos-Sopra Steria poll released on Friday, July 16, found more than 60% of French people agree with mandatory vaccination for health workers, as well as a requirement for a health pass in some public places.

Fast-spreading variants of the virus risk undermining economic recovery if allowed to spiral out of control, forcing some governments to rethink their COVID-19 strategies just as citizens start their summer holidays.

Earlier on Saturday, Castex’s office said France would reinforce restrictions on unvaccinated travelers from a series of countries to counter a rebound in COVID-19 infections while opening its doors to those who have received all their shots.

“The Delta variant is here, we must not hide the truth, it is more contagious than the previous ones. We must adapt and face it,” Castex told reporters in southwestern France, referring to the variant first identified in India.

Some 55.1% of the French had had a single dose of a vaccine as of Friday and 44.2% were fully inoculated – not enough to stop the virus’s spread. – Rappler.com