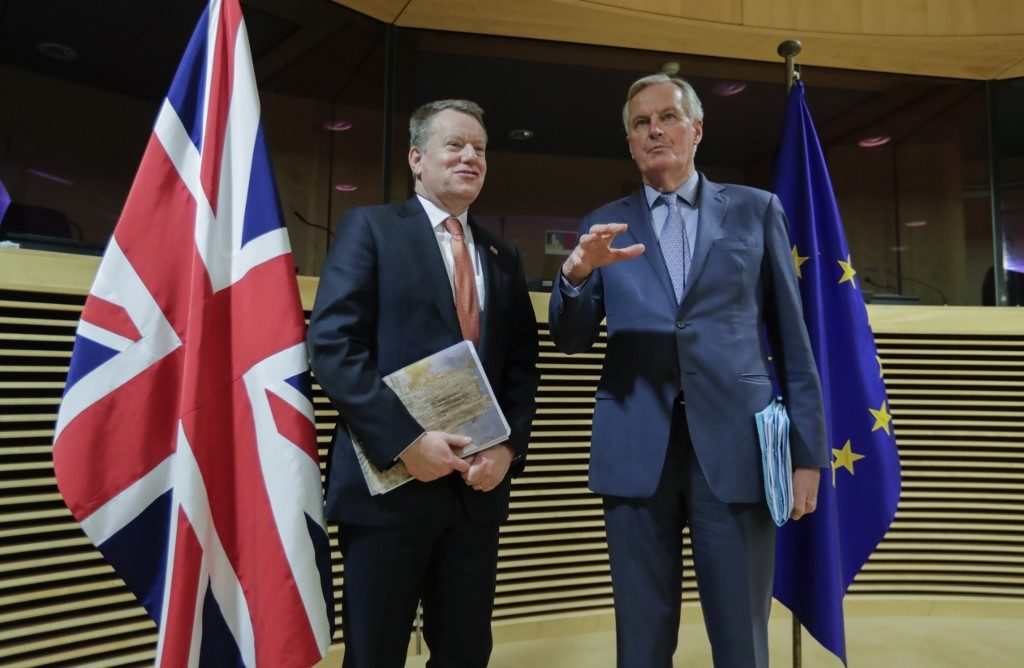 European Union chief Brexit negotiator Michel Barnier (R) and the British Prime Minister's Europe adviser David Frost speak at start of the first round of post-Brexit trade deal talks between the EU and the United Kingdom, in Brussels on March 2, 2020. (Photo by Olivier HOSLET / POOL / AFP)

Facebook Twitter Copy URL
Copied
Without a deal, Britain would leave the EU single market and customs union on January 1, triggering immediate and significant barriers to cross-Channel trade and business

Britain and the European Union resumed crucial negotiations in London on Monday, November 9, for a post-Brexit free trade deal, with time running short and both sides saying major obstacles remain.

EU chief negotiator Michel Barnier arrived in the British capital late Sunday, November 8, before another week of talks with his UK counterpart David Frost, as they scramble to find an agreement.

Britain formally left the bloc in January but remains bound by most of its rules until the end of the year under the terms of its divorce.

Parliaments in London and Brussels need time to ratify any deal struck, leaving scant time for the two sides to find a compromise on key outstanding issues.

These include establishing rules for competition between British and European companies, oversight mechanism and fishing rights.

Barnier said on Twitter the keys to unlocking the door to a deal were “respect of EU autonomy and UK sovereignty” alongside “robust guarantees of free and fair trade” and “stable and reciprocal access to markets and fishing opportunities.”

Von der Leyen vowed both negotiating teams would “continue working hard” while Johnson said they would “redouble efforts to reach a deal.”

However, neither side has indicated yet that they are willing to make the compromises needed for a breakthrough.

Observers have said an agreement is needed by mid-November to allow for ratification.

Britons voted to end decades of EU economic and political integration in 2016 but implementing Brexit has proved immensely difficult ever since.

They had predicted a draft would need to be finalized by mid-October in order to be ratified by the EU and UK parliaments before the end of the year.

But the coronavirus pandemic strained the already ambitious timetable, while the most divisive issues have stalled the talks for months.

Without a deal, Britain would leave the EU single market and customs union on January 1, triggering immediate and significant barriers to cross-Channel trade and business.

London and Brussels still insist they would prefer to avoid the economic disruption that this would entail.

Environment Secretary George Eustice offered a glimmer of hope that the UK could be ready to show more flexibility over EU access to British waters for fishing crews.

“We’ve always been open to doing a sensible approach looking particularly at agreements that might span a couple, 3 years for instance,” he told Sky News.

Britain has been reported to be holding out for annual talks over fisheries access.

“Controlled access to our waters has always been a red line for us in these negotiations,” Eustice added.

A so-called no-deal Brexit could complicate the situation on the island of Ireland, and its politically-sensitive border between UK-ruled Northern Ireland and EU member Ireland.

London is currently pushing controversial legislation through parliament to regulate its post-Brexit trade with Northern Ireland that would unilaterally rewrite the EU divorce treaty and breach its terms.

Brussels has already initiated legal action over the draft law, which British lawmakers in the upper chamber House of Lords will vote on later Monday.

Meanwhile leading Democrats in the United States, including Irish-American President-elect Joe Biden, have warned a US-UK trade deal could be compromised if the island becomes a “casualty” of a “no-deal” Brexit.

Irish Foreign Minister Simon Coveney said Monday that Biden’s election could lead London to “pause for thought” and “ensure that the Irish issues are prioritized.”

“Joe Biden is a real friend of Ireland,” Coveney added, noting he had stressed “the need to prevent a hard border at any point in the future linked to Brexit policy and Brexit negotiations.” – Rappler.com