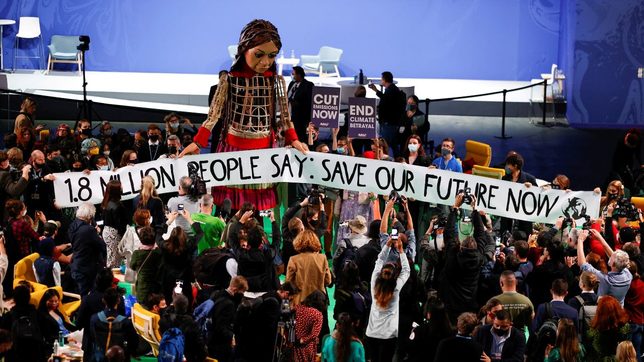 'SAVE OUR FUTURE.' People gather around 'Little Amal,' a 3.5-meter tall puppet of a young Syrian refugee girl, during the UN Climate Change Conference in Glasgow, Scotland, Britain, on November 9, 2021.

Facebook Twitter Copy URL
Copied
The panelists also call out the health systems in rich nations as part of the problem, with the healthcare sector responsible for up to 5% of global carbon emissions

If you thought the COVID-19 pandemic was disruptive and deadly, climate change will be so much worse.

So said a slew of panelists Tuesday, November 9, at the UN climate talks in Glasgow, warning about escalating climate-linked health threats such as disease, heatstroke and air pollution.

But they also called out the health systems in rich nations as part of the problem, with the healthcare sector responsible for up to 5% of global carbon emissions.

“We need to recognize the role of health systems as emitters,” said Rachel Levine, the US assistant secretary of health. “We cannot stand back and only tell others what they should do to protect our patients.”

The main sources of emissions from the healthcare sector include the manufacture and transport of medical goods, as well as the construction and operation of hospitals and clinics.

On Tuesday, the World Health Organization (WHO) announced dozens of governments had committed to reduce emissions in their health systems or to transition entirely to net-zero.

Speakers also called on countries to get ready for more climate-linked illnesses and casualties.

Already, climate change is worsening food and water security, while deadly heatwaves and floods are testing communities around the world.

Medical systems are often being strained if not damaged by these same types of events.

Fiji’s UN Ambassador Satyendra Prasad described the challenge of keeping medical facilities open in the midst of superstorms and floods that are battering the Pacific island nation.

“It’s quite tragic when your doctors and nurses are themselves being evacuated, when they should be providing frontline services,” he said.

Fiji is also seeing more waterborne diseases in the flooding after storms, he said.

Former British Prime Minister Gordon Brown, now the WHO ambassador on global health finance, called on rich countries to keep their promise to provide $100 billion a year in climate financing for poorer nations. That money, he said, could be used to bolster healthcare worldwide.

Doctors have said the best way to prevent spiraling public health dangers is to meet the 2015 Paris Agreement goal of limiting global warming to 1.5 degrees Celsius above pre-industrial levels.

An editorial run in 233 health journals urged the same, saying that passing the 1.5ºC threshold risks “catastrophic harm to health that will be impossible to reverse.”

“Although COVID has been a deadly disease, climate change will take more lives in the next 50 to 100 years than anything that that [the coronavirus] disease will do,” Brown said. “We need to keep 1.5 degrees alive to keep millions of people alive.” – Rappler.com