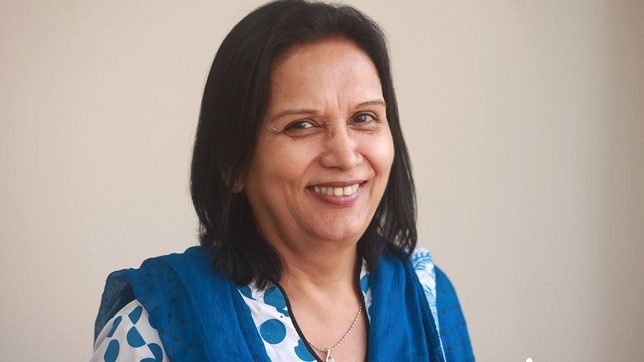 Facebook Twitter Copy URL
Copied
Bangladeshi scientist Firdausi Qadri is honored as a 2021 Ramon Magsaysay awardee for her work in the fight against cholera and typhoid, and for her dedication to local capacity-building, among others

When the Ramon Magsaysay Award Foundation (RMAF) tried to call Bangladeshi scientist Firdausi Qadri to tell her she had been named a 2021 awardee of what’s considered the Asian Nobel Prize, she almost didn’t pick up the phone.

Qadri was in the hospital, staying with her husband who was confined in the intensive care unit. Her son had alerted her, saying the call was coming quite a lot.

The news came as a surprise for Qadri. “It was something that I cried about. I couldn’t tell my husband because he was intubated, but I whispered in his ears,” she recalled during a media roundtable on September 17.

Her husband died a day after the announcement. Qadri described him as a quiet man, complementing her personality and how she used to “make all the noise.”

As someone who has had to work in the laboratory and in the field for the better part of the last three decades, Qadri said her husband was her rock and life’s support.

Despite her loss, she told her children abroad not to worry about her, as she still plans to “work and work and work.” For Qadri, work never stops, just as learning never stops.

The RMAF recognized Qadri for her work in the fight against cholera and typhoid, particularly for her role in helping develop a more affordable oral cholera vaccine (OCV) and typhoid conjugate vaccine for infants, children, and adults.

She was also recognized for leading a team of experts in the OCV mass vaccination program for Rohingya refugees from Myanmar, which prevented a mass cholera outbreak. She also helped in the OCV vaccination of 1.2 million people in six high-risk districts in Bangladesh’s capital, Dhaka.

Now, dealing with a vastly different pandemic, Qadri has shifted her focus toward COVID-19 testing and research.

Qadri describes herself as a “die-hard Bangladeshi.” After earning a doctorate in biochemistry/immunology from the University of Liverpool in 1980, she and her husband had opportunities to stay in the United Kingdom but ultimately decided they needed to go home.

“We came back with almost nothing…and my challenge was that I wanted to do research,” Qadri said.

While her husband was an academician, and while she started out as a teacher as well, Qadri craved to be “in the lab, in the field, in the research.”

When she decided to pursue this line of work, she was frustrated with the lack of facilities and resources in Bangladesh at the time.

Her opportunity to make an impact on the world came when she started working at the International Centre for Diarrhoeal Disease Research, Bangladesh (icddr,b) in 1988.

In a country plagued with enteric or intestinal diseases, Qadri knew how difficult it was to keep one’s children safe from illnesses like diarrhea, cholera, and typhoid. After all, she had three children herself.

“I knew these diseases were back, they were leading to stunting in children, malnutrition, repeated diseases, repeated infections…but I felt that this was a cause that I could contribute to. I didn’t know how much I could do at that time, but I started with the laboratory work,” she said.

Qadri started research on shigella, which she said was a major problem at the time, causing death and suffering. While doing this work, she even got infected with Shigella dysenteriae type 1 herself.

She later started her work in cholera, a disease endemic in Bangladesh. People who lived in densely populated areas with poor access to safe water, sanitation, and education were vulnerable to this disease.

At the time, she said, very little information was available about what happens to a person when they have diseases like cholera, shigella, and typhoid in a setting like theirs. She then took it upon herself to learn more.

According to the RMAF, Qadri has now been credited in 490 publications in peer-reviewed journals of high impact.

She considers Bangladesh a “very vaccine-friendly country,” but this doesn’t mean there is no resistance. Qadri believes the resistance is not due to a lack of understanding but because of a desire to know how vaccines work.

“My research, when I go into the intricate research, is not possible for the common man to understand. But they want a solution. They want a solution to diseases. There are people who are knowledgeable, [and those] who are misinformed, always,” she said.

There are some people who have beliefs that they don’t want to move from. But you have to help them understand.

In a specific feasibility and effectiveness trial of OCV conducted among 240,000 individuals in urban Bangladesh, Qadri and her co-authors found that it was “feasible and impactful to vaccinate the populations at risk in Bangladesh with OCV,” and that a single dose of Shanchol could protect children over the age of 5 and adults.

When the Rohingya refugees came to Bangladesh, Qadri said they already had the epidemiological data showing that the Chittagong Division, which included the Cox’s Bazar District that contained Rohingya refugee camps, had one of the highest rates of cholera after Dhaka City. Hence, they acted with the government and other international partners to distribute vaccines in the Cox’s Bazar District, preventing a cholera epidemic.

Qadri mentioned a “mechanism for [the] dissemination of information” at the icddr,b and that they try to tell everyone about the work they do. For one, the website has a knowledge repository providing its publications online for free access.

After facilitating the rollout of the OCV, Qadri said what keeps her ticking is the fact that the work she does produces evidence and gives relief to people.

She also gave assurances to those who express hesitancy over COVID-19 vaccines.

“All people cannot come to a facility. If I can give a vaccine and prevent that, that is important. It may not be able to prevent all infections. So COVID-19 vaccine is not different…. I think if vaccines were not there, we would be hopeless,” she said.

For all her achievement as a woman in science, Qadri doesn’t downplay the struggles women face, acknowledging that “all women face challenges in Bangladesh [and] all over the world.”

Her greatest challenge was having to deal with the concept people have of what a woman should be and what she should be doing. Qadri recalled that her male colleagues would stop her if they saw her working after 5 pm, saying, “How are your children going to become human beings and good children?”

This did not deter her and instead made her more determined to show Bangladesh and the world that women can do both things – work a tireless job and take care of one’s family.

She is lucky that she has the support of her family, which she acknowledged most people don’t have. Her late husband also helped her look after their children.

She said she feels for women who are kept from “leveling up” as full-time scientists because of hindrances presented by such norms. Because of this, she makes sure to do her part in encouraging both women and men to pursue the sciences.

Qadri said people in Bangladesh go into commerce and computers because it is very lucrative, but in science, “it takes longer to achieve what you want to achieve.”

Still, her efforts to encourage other people to pursue a career in science has paid off. A girl once came up to her while she was going to a mosque to pray, saying, “Auntie, I want to study.” The girl now works in Qadri’s foundation as a medical technologist.

Qadri believes that every woman should have a profession as it gives them confidence and brings pride to a country such as Bangladesh.

“And the honor that they get later on from their families. They’re not downtrodden then. Nobody can pick on them and beat them and do things like that. You know, they then become self-sufficient and that is the road to success,” she said.

For Qadri, knowledge-gathering and knowledge-sharing are lifelong activities. All her life, she has kept working to find gaps in knowledge and to fill these gaps, too.

In 2012, she was awarded the Christophe Rodolfe Grand Prize, and she used the prize money to found the Institute for Developing Science and Health Initiatives (ideSHi), launched in 2014. The foundation serves as a hub for scientists from other countries to collaborate and a training ground for medical personnel, clinicians, and researchers.

When COVID-19 came, she and her team were not deterred by the fact that they weren’t experts in respiratory infection. They simply started learning from other professionals.

“[We] were all at a standstill. But then, personally, I felt that this is a time when I must serve my country,” she said.

Before COVID-19, ideSHi was dedicated to doing work on genetic disorders, including studies on inborn errors of metabolism, Down Syndrome, Huntington’s disease, and congenital hypothyroidism, among others. And then, both icddr,b and ideSHi shifted to COVID-19 work.

With support from partners such as the USAID and UNICEF, the icddr,b has been providing the government of Bangladesh services connected to COVID-19 response. These include conducting testing, establishing new COVID-19 testing laboratories, strengthening hospitals, contact-tracing, and conducting research on various factors of the pandemic, among numerous other initiatives.

“So I had this knowledge-gathering, the education all my life. And I learned everything. But the important thing is I wanted to serve Bangladesh. And now we have so many things that we can do,” she said. – Rappler.com