FAST FACTS: What you need to know about Resorts World Manila Facebook Twitter Copy URL
Copied
Shooting and fire broke out in Resorts World Manila past midnight of June 2. Here's what you need to know about the place.

Unlike other commercial enclaves in the Philippine capital, Resorts World Manila is a destination that attracts not only shoppers, tourists, and entertainment guests, but also gamblers – both high rollers and mass gamers.

Here’s what you need to know about Resorts World Manila:

Travellers and Alliance Global are listed in the Philippine Stock Exchange, while Genting is listed in Hong Kong and traded in Singapore. The strength of Tan’s group is in mixed-used property development, while Genting has international experience in operating casino and gaming businesses.

The attacks past midnight of June 2 took place at Newport City, a 25-hectare tourism-resort complex in Pasay City.

In particular, the gunman carried out the attacks in a block where a mall, casino, and hotel are located. He first entered the premises via the upscale 11,534 sqm Newport Mall, which is comprised of about 90 retail stores and food-and-beverage outlets with a mix of high-end boutiques and a few mass market stalls. This mall is one of the few 24-hour commercial leisure and luxury establishments in Manila.

The area also hosts the Newport Cinemas, which operates 24 hours on weekends; as well as the 1,500-seat Newport Performing Arts Theater, and the GameZoo arcade, a training academy, and 400-seat capacity call center.

These commercial and office spaces are adjacent to a key attraction of Newport City: the casino.

First to introduce a privately-owned, world-class gaming facility in the Philippines, Resorts World started operations in 2009 and has a total of 316 casino tables, 1,805 slot/electronic gaming machines, and 210 electronic gaming tables, according to 2016 annual reports filed by the company.

The gunman proceeded to the general casino area after he reportedly entered the second floor of the mall.

He was later found dead in one of the rooms at Maxims Hotel, which is adjacent to the casino floors. Reports also said the attacker had been a “longtime guest” at the hotel, and had checked in at the 5th floor for quite some time. (READ: Suspect in Resorts World attack a ‘longtime guest,’ says BFP)

Designed as a property development in an urban area that offers the live-work-play concept, the hotel, mall, and casino combination is part of the Newport City’s integrated plan to cater to different target markets.

Newport City is a “township” comprised of residential condominiums, hotels, shops, restaurants, and office buildings. It describes itself as a one-stop-shop destination for visitors looking for gaming, shopping, hospitality, entertainment, and leisure experience – a hub that serves as a boon to those who want to avoid the nasty traffic that regularly grips the metro.

Among the hotel brands in Newport are Mariott Hotel Manila, Maxims Hotel, and Remington Hotel, as well as The Hilton Manila, Sheraton Manila Hotel, and Maxims II, which are expected to be completed by 2018.

Similar integrated models have inspired other developments in Entertainment City, located near Manila Bay, where 3 of the 4 casino-entertainment complexes are now operational.

Among these are the $1.2-billion Solaire Resorts and Casinos, which opened in 2013. The 8.3-hectare complex is owned and operated by Bloomberry Resorts Corporation of ports tycoon Enrique Razon.

The following year, City of Dreams Manila also opened its doors to the public. The $1.2-billion integrated destination is a partnership among tycoons from the Philippines, Macau, and Australia.

Belle Corporation, which owns the land where the 6.2-hectare complex sits, is controlled by the Sy family. Melco Crown Entertainment of billionaires James Packers and Lawrence Ho operate the casino and 3 hotel brands: Crown Towers, Nobu, and Hyatt.

Last March, Japanese billionaire Kazuo Okada and his Filipino partner Antonio Cojuangco Jr unveiled Okada Manila. The 44-hectare complex, like Solaire, is next to Manila Bay – known for its iconic sunset views. It features over 500 table games and more than 3,000 electronic gaming machines.

The 4th and final casino player is Andrew Tan-owned Travellers International’s West Side City Resorts World, which is slated to launch in 2020. 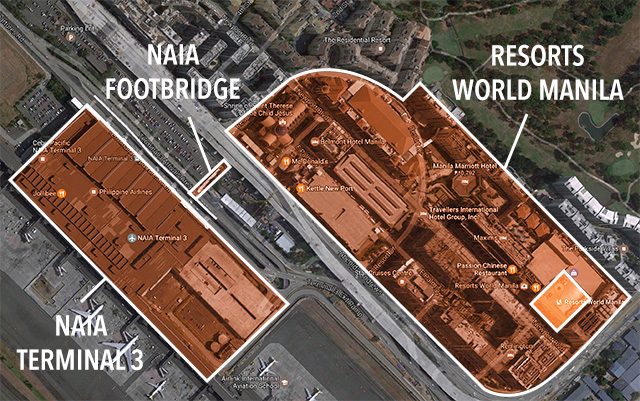 Resorts World Manila is located across the Ninoy Aquino International Airport (NAIA) Terminal 3, and is approximately 5 kilometers from NAIA Terminal 1 and 2.

Plagued by road traffic that hampered visitors who flew in via NAIA 3, Resorts World’s parent firm, Alliance Global, financed and built an airconditioned P1.5-billion footbridge that connects the terminal and Newport City. The footbridge was opened to the public only a few weeks ago. (READ: PH tourism braces for impact of Resorts World Manila attack)

During the June 2 midnight attack, the Manila International Airport Authority ordered a brief shutdown of the main gates of the NAIA terminals from 1:45 am to 3:45 am.

Heightened security at the airports was also observed hours after the incident. – Rappler.com