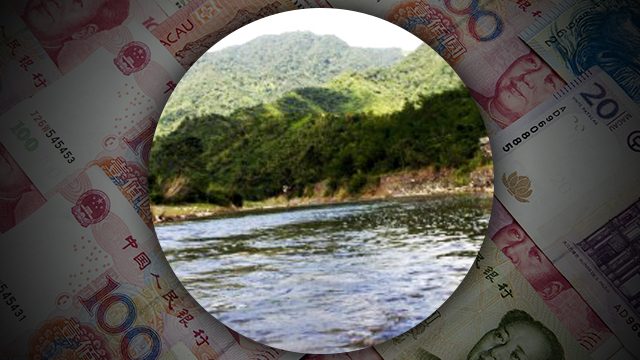 Facebook Twitter Copy URL
Copied
(UPDATED) 'The choice of law and the venue for disputes is once again surrendered by the Philippines in favor of China,' senatorial bet Neri Colmenares tells Rappler

MANILA, Philippines (UPDATED) – The Kaliwa Dam project, which the Duterte administration said would prevent another water crisis in Metro Manila, is a magnet for controversy.

Already hounded by environmental and social concerns for decades, another issue surrounding the dam is a loan contract with China, which senatorial bet Neri Colmenares said was contentious.

“It is as onerous [as the Chico River irrigation project],” Colmenares told Rappler on Sunday, March 24.

The public can now go over the deal, as well as 8 other big-ticket infrastructure projects, after the Department of Finance (DOF) recently made public all loan agreements.

The Kaliwa Dam’s loan contract had articles pertaining to “waiver of immunity,” similar to the controversial Chico River irrigation project.

Colmenares said these were telltale signs of Beijing’s debt-trap diplomacy.

In a text message, Finance Assistant Secretary Antonio Lambino however said that the questioned provision in the agreement was “standard,” and just means that China has recourse in case of non-payment.

Moreover, he said that there are no assets involved as collateral in case of a default.

The DOF earlier expressed confidence that the government is “handling debt responsibly.”

Lambino said in previous interviews that all loan agreements underwent a tedious vetting process by the Department of Justice, the Bangko Sentral ng Pilipinas, and the DOF.

What is the project about? Located in Quezon province, the Kaliwa Dam is expected to supply some 600 million liters of water per day to Metro Manila. (READ: Manila Water on the hunt for new water sources)

The dam will be constructed by Beijing-run China Energy Engineering Corporation.

Several news reports stated that construction is targeted to start during the 3rd quarter of the year, and is expected to be completed by 2023.

How much is the loan? Export-Import Bank of China agreed to lend the Philippine government $211,214,646.54 for the project.

The amount is 85% of the total needed funds for the project, where the remaining 15% will be shouldered by the Philippines.

It is payable in 20 years, including a grace period of 7 years.

The Philippine government will pay up by 26 equal installments within the repayment period.

In case of a default or when the Philippine government cannot pay off the debt, China can suspend or terminate any further disbursements. All delinquencies are also deemed to be due immediately without any need for legal formalities.

What are the contentious provisions? The contract contains clauses on “waiver of immunity,” similar to those found in the Chico River irrigation project contract.

For the Kaliwa Dam contract, such provisions are found in articles 5.7 and 8.1.

The contract states that the Philippine government “irrevocably waives any immunity on the grounds of sovereignty” or any other situation in relation to any arbitration proceeding which may arise from the loan agreement.

However, the provision also provides an exception to such waiver if it is prohibited by Philippine law.

Below are the articles in full:

Article 5.7 The signing of the agreement by the borrower constitutes, and the borrower’s performance of its obligations under this agreement will constitute commercial acts. Neither the borrower nor any of its assets is entitled to any right of immunity on the grounds of sovereign or other wise from arbitration, suit, execution, or any other legal process with respect to its obligations under this agreement, as the case may be, in any jurisdiction, except any other assets of the borrower located within the territory of the Philippines to the extent that the borrower is prohibited by the laws or public policies having force of law in the Republic of the Philippines, applicable and in effect at the signing date of this agreement, from waiving such immunity.

Article 8.1 Waiver of immunity. The borrower hereby irrevocably waives any immunity on the grounds of sovereignty or otherwise for itself or its property in connection with any arbitration proceeding pursuant to Article 8.5 hereof or with the enforcement of any arbitral award pursuant thereto, except any other assets of the borrower located within the territory of the Philippines to the extent that the borrower is prohibited by the laws or public policies having force of law in the Republic of the Philippines, applicable and in effect at the signing date of this agreement from waiving such immunity.

The contract also states that disputes will be resolved through “friendly consultation.”

If that fails, the dispute would be escalated to the Hong Kong International Arbitration Center for arbitration.

Any decision made by the tribunal shall be final and binding upon both parties.

Colmenares said that while the wording of the Kaliwa Dam contract on the waiver slightly differs from that of the Chico River document, it still has similar implications and effects.

“The choice of law and the venue for disputes is once again surrendered by the Philippines in favor of China. The [Department of Justice] is further required to submit to China a legal opinion stating that the choice of Chinese law as the governing law is a valid choice of law,” Colmenares said.

He added that the provision would allow China, following a win in arbitration conducted in Hong Kong using Chinese laws, to take over Philippine government properties.

Colmenares also questioned the preselected contractor who will implement the project.

“No surprise, it is a Chinese contractor – China Energy Engineering Corporation Limited. This is a violation of our procurement laws, as well as violation of the Constitution that mandates a preference for Filipino contractors and workers who are equally if not more than qualified,” said the former lawmaker.

With the release of the official documents, Colmenares said he plans to file a petition at the Supreme Court (SC) to question the contracts.

Carpio said that should the Philippines default on its loan and go to arbitration, the country won’t stand a chance of winning.

He also pointed out that China can take anything, including the gas-rich Reed Bank, which it has interest in. – Rappler.com