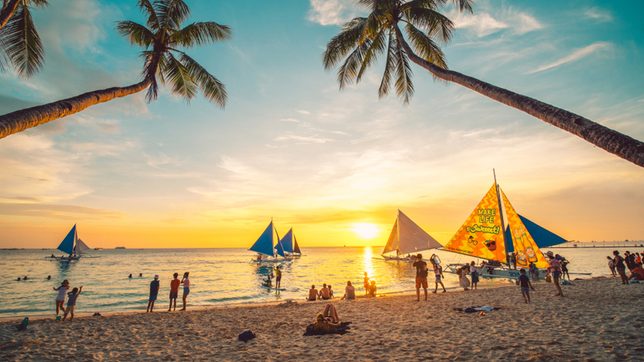 BORACAY. Tourists on the shore of Boracay.

Facebook Twitter Copy URL
Copied
Tourism Secretary Bernadette Puyat says this could be implemented within November, ahead of the Christmas season

The Department of Tourism (DOT) said Aklan may do away with the requirement of negative COVID-19 swab tests for vaccinated tourists ahead of the holidays.

In an interview with ANC’s Headstart, Tourism Secretary Bernadette Puyat said the Aklan provincial government appeared open to the request as long as tourism workers and residents are fully vaccinated, which she said is what the DOT “has been doing.”

“According to him (Aklan Governor Florencio Miraflores), in a month’s time or maybe in three weeks’ time, he will already be accepting fully vaccinated in lieu of RT-PCR,” said Puyat on Wednesday, October 27.

“But of course, if you’re not vaccinated, you still have to give a negative RT-PCR,” added Puyat.

A fully vaccinated individual is someone who already had either a one-dose vaccine or their second dose of a two-dose vaccine for at least 14 days, the tourism chief explained.

As of Sunday, October 24, 91% of tourism workers and 62.78% of the eligible population in Boracay have been vaccinated.

“For Christmas, in December, all you have to show is that you are fully vaccinated…. You just have to show the VaxCertPH [vaccine certificate],” said Puyat.

Puyat said the airlines are “very excited” with the news on Boracay.