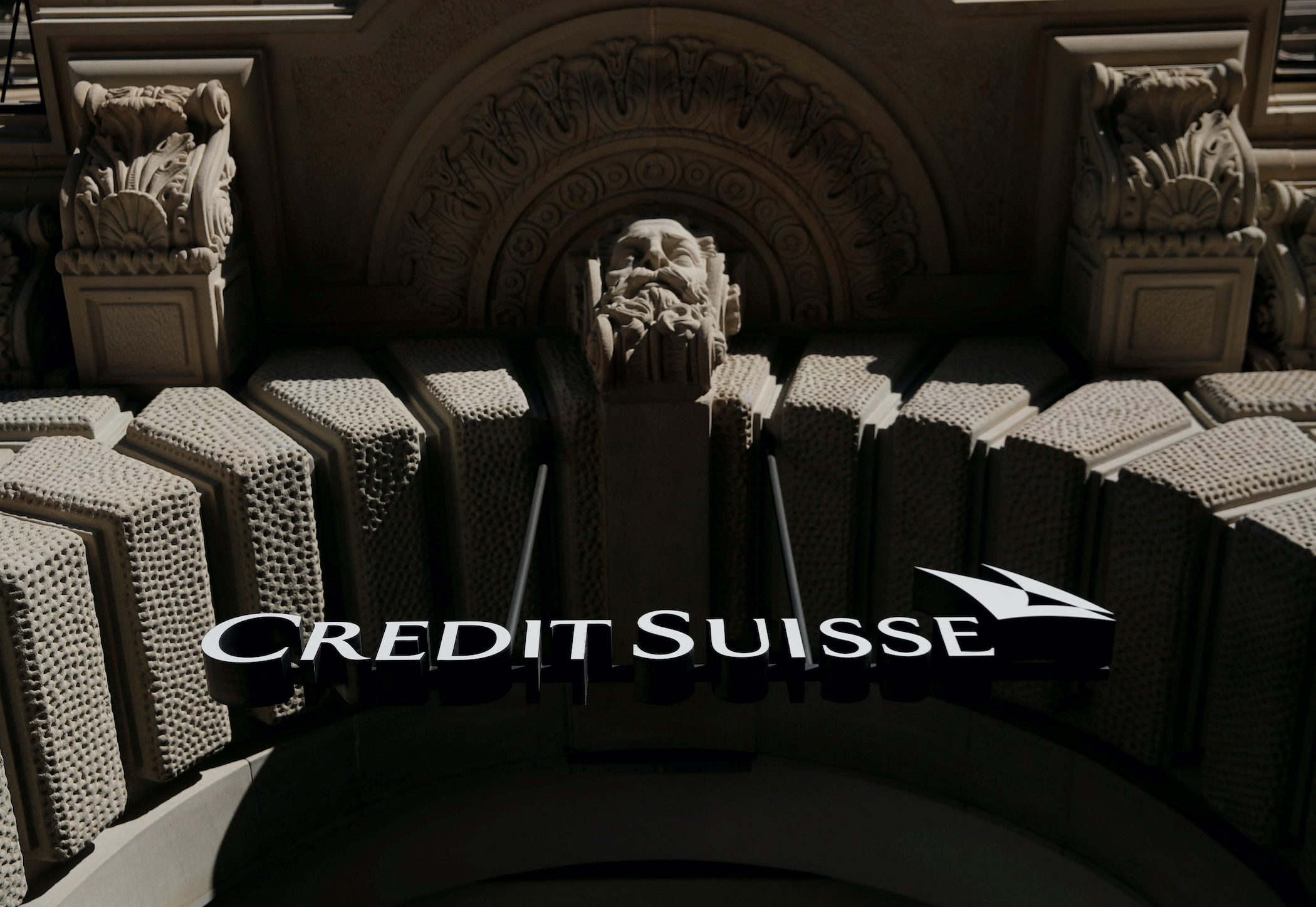 CREDIT SUISSE. The logo of Swiss bank Credit Suisse is seen at its headquarters at the Paradeplatz square in Zurich, Switzerland, October 1, 2019.

Facebook Twitter Copy URL
Copied
The ruling marks another headache for Switzerland's second biggest bank, which has been reeling from billions in losses racked up via risk-management and compliance blunders

BELLINZONA, Switzerland – Credit Suisse was convicted by Switzerland’s Federal Criminal Court on Monday, June 27, of failing to prevent money laundering by a Bulgarian cocaine trafficking gang in the country’s first criminal trial of one of its major banks.

A former employee was found guilty of money laundering in the trial, which included testimony on murders and cash stuffed into suitcases and is seen as a test case for prosecutors taking a tougher line against the country’s banks.

The ruling marks another headache for Switzerland’s second biggest bank, which has been reeling from billions in losses racked up via risk-management and compliance blunders.

Both Credit Suisse and the former employee had denied wrongdoing.

Credit Suisse said it would appeal against the conviction.

The judges looked at whether Credit Suisse and the former employee did enough to prevent the cocaine trafficking gang from laundering profits through the bank from 2004 to 2008.

“These deficiencies enabled the withdrawal of the criminal organization’s assets, which was the basis for the conviction of the bank’s former employee for qualified money laundering,” the court said.

“The company could have prevented the infringement if it had fulfilled its organizational obligations,” the presiding judge said in handing down the verdict, adding that the former employee’s superiors had been “passive.”

Credit Suisse said the case arose from an investigation that dated back more than 14 years.

“Credit Suisse is continuously testing its anti-money laundering framework and has been strengthening it over time, in accordance with evolving regulatory standards,” the bank said.

“Generating compliant business growth in line with legal and regulatory requirements is key for Credit Suisse.”

The court handed the former employee, who cannot be named under Swiss privacy laws, a suspended 20-month prison sentence and a fine for money laundering.

The presiding judge said she had failed to fulfill her role in the bank’s “first line of defense.”

The former banker’s attorney said she would appeal against the “unfounded and unfair decision,” noting she had not made any financial gain.

“This judgment places the responsibility for money laundering on people without any serious training or experience,” her attorney said.

Credit Suisse shares closed up 0.4%, while the European banking sector index rose 0.3%. They are down more than 40% in the past year.

Corruption and money laundering experts had said the fact that Switzerland had taken legal action against a global banking player like Credit Suisse could send a powerful message in a country famous for its banking industry.

“This has the potential to be a watershed moment for Switzerland,” Mark Pieth, a money laundering expert at the University of Basel, said on the eve of the trial.

“What is significant about this case is that Switzerland is taking legal action against a company and not just any company – Credit Suisse is one of the jewels in the Swiss crown.”

Under Swiss law, a company can be held liable for inadequate organization or failing to take all reasonable measures to prevent a crime from happening.

In the Credit Suisse case, prosecutors alleged the former relationship manager helped to conceal the criminal origins of money for clients through more than 146 million Swiss francs in transactions, including 43 million francs in cash, some of it stuffed into suitcases.

The relationship manager, who left Credit Suisse in 2010, was not in the courtroom on Monday.

During court hearings in February, the former relationship manager said Credit Suisse learned of murders and cocaine smuggling allegedly connected to the Bulgarian gang but continued to manage cash that became the focus of the trial.

The former banker said during the hearings she informed her managers about events, including two murders, associated with the clients, but that they decided to pursue the business nonetheless.

Credit Suisse has disputed the illegal origin of the money, saying that a former Bulgarian wrestler and his circle operated legitimate businesses in construction, leasing, and hotels. – Rappler.com