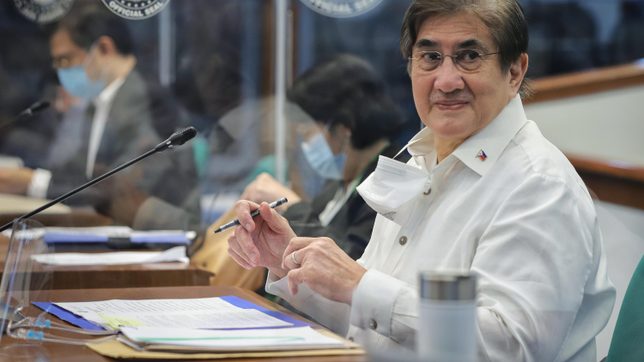 The Department of Information and Communications Technology (DICT) on Tuesday, October 6, said the government would save up to P34 billion in internet expenses by 2025 if Congress augments the budget for broadband.

In the DICT budget hearing at the Senate, Secretary Gregorio Honasan II appealed to senators to prioritize the National Broadband Program and the free internet access program in schools, should the chamber back more funds for the department.

According to the DICT’s presentation to the Senate, the ideal budget for the broadband program amounts to P18.18 billion, but the Department of Budget and Management (DBM) only approved P902.19 million.

The DICT is requesting an additional P17.2 billion for the program, so that it would be able to activate the cable landing station in Baler, Aurora, and connect to the National Grid Corporation of the Philippines (NGCP) node in San Fernando, La Union.

The department would then be able to fire up 4 DICT nodes and 15 NGCP nodes. From there, it can provide bandwidth to nearby government clients and beneficiaries of free Wi-Fi.

If the additional P17.2 billion is approved, the DICT said it can proceed with Phase 2 of the program to cover Luzon, the Visayas, and Mindanao.

Projected savings in government internet expenses could amount to P6.3 billion by the end of 2021. DICT Assistant Secretary Manny Caintic said the government will be able to utilize speed of 1.5 terabits per second (Tbps) if the reforms push through with the help of a higher budget.

The free Wi-Fi project, meanwhile, got P2.73 billion, yet the ideal budget is pegged at P6.35 billion.

In total, the DICT said it would need P20.9 billion for the two initiatives.

Senator Panfilo Lacson, the Senate finance committee vice chairman, said that while Congress may be able to do its part in augmenting the DICT’s budget, the President might strike out the additional funds when he signs the 2021 general appropriations bill.

Honasan told Lacson that he would heed the suggestion, but he was also candid enough to say that he expects the government to slow down by the 4th quarter of 2021 leading up to the 2022 elections.

“We’re concerned about the ticking clock. Our timeline in setting this in motion was 18 months,” said Honasan.

“‘Pag inabot tayo by next year, last quarter, government will slow down – ‘yung momentum na na-develop natin. Self-inflicted. If not corrected and not institutionalized, mahihirapan tayo including the post-2022 scenario,” he added.

(When we reach the last quarter of next year, the government will slow down – the momentum that we developed. It’s self-inflicted. If not corrected and not institutionalized, it will be more difficult for us [to implement these reforms], including the post-2022 scenario.)

Caintic told senators that a 10% increase in digital penetration could grow the digital economy by 1.3% annually.

“Billions po ‘yun. Bawing-bawi na po (The returns would be in the billions. We would really recover our investments with that),” said Caintic.

At the end of the hearing, Lacson promised that the DICT budget will be increased.

“We know your priorities. We will do our part.… I will commit to you again because I believe in ICT. We can achieve a lot of things if our information and communications technology is efficient,” said Lacson in a mix of English and Filipino.

“See you in the plenary. The DICT budget is considered recommended for plenary deliberations, with a promise that we will augment this.” – Rappler.com