SHOPPING. People walk in a shopping street as shops reopen amid the coronavirus pandemic in downtown Budapest, Hungary, April 7, 2021.

BUDAPEST, Hungary – With prices surging, 24-year-old Noemi Turi presented her employer in Budapest with a pay request 16% above what she considered acceptable just a few months ago as double-digit inflation across East Europe fuels wage demands.

The small business, where the Hungarian university student works as a social media manager and copywriter, granted her nearly the entire desired amount.

“I was in a good bargaining position as management knows exactly what everything costs these days,” Turi said. “They knew I did not quote this figure on a whim.”

She said living from paycheck to paycheck with no money to spare was not an option as she embarks on her adult life. She did not disclose how much she was awarded.

Double-digit wage rises at a time of double-digit inflation are emerging as the next policy challenge of central banks in Hungary and Poland, whose massive rate rises so far have failed to curb inflation.

Hungarian private sector wage growth ran well above the central bank’s 2022 forecast in the first quarter, with some analysts projecting a 15% increase for the year. Polish corporate wage growth has also exceeded market expectations since the start of the year.

A hike in the minimum wage, tax cuts for career starters, and public sector wage bonuses under a pre-election spending spree that helped Prime Minister Viktor Orban get reelected in April have exacerbated Hungary’s inflation challenge.

With a two-step minimum wage hike worth nearly 15% planned for the 2023 election year, Poland appears to be headed for a similar predicament, with some analysts saying a wage-price spiral is already unfolding in the region’s biggest economy.

“It’s hard to argue that a wage-price spiral is not already in motion in Poland and we think inflation will rise above 15% in the summer and stay in double-digits until at least Q2 next year,” said Liam Peach at Capital Economics.

“Poland’s policy mix is not sufficiently tight enough to cool the economy as tighter monetary policy is feeding through only slowly and, in any case, is being partly offset by looser fiscal policy.”

“CEE inflation continues to rise and surprise to the upside,” analysts at Goldman Sachs said. “We think that the broadening nature of price increases in the CEE reflects strong second-round effects from the inflation overshoot.”

Surge in eurozone wages may be less than meets the eye 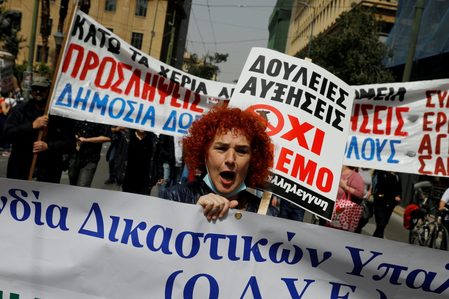 After flagging the first rate hike since 2011 last week, European Central Bank President Christine Lagarde said euro area inflation expectations were “well anchored” and, despite a recent pickup in wages, there was no risk of spiraling.

Eurozone wages are also climbing but some pay rises may prove fleeting as employers across the bloc opt to give one-off bonuses rather than permanent increases.

Hungarian inflation expectations in contrast are running far above the central bank’s target, while two-thirds of Polish companies surveyed in March projected that future price growth would outpace current inflation, now at its highest in almost a quarter of a century.

Remarks by National Bank of Poland Governor Adam Glapinski last week that the bank was near the end of its rate hike cycle put pressure on the zloty, which along with the forint has underperformed the region’s currencies this year.

“This is a worrying turnaround, given that there are not any improvements in inflationary risks: we see rather high inflation expectations, accelerating core inflation, and strong second-round effects,” economists at ING said. “Also, the wage pressure is high while companies’ bargaining power is weak.”

Hungary’s situation is even more precarious after the forint sank to record lows this week, pressured by a raft of local factors, including the National Bank of Hungary halving the pace of its rate rises despite inflation still rising.

The weakness of the forint, which has fallen some 7% against the euro this year alone, is also fueling inflation.

“Inflation developments justify continuation of monetary tightening that should be more prolonged, and the terminal rate is to be reached later and at a higher level than previously expected,” said Orsolya Nyeste at Erste Bank.

The Hungarian central bank said wage rises over the coming months would be one of the pivotal factors determining the length and extent of its tightening cycle. They could also pose a competitiveness challenge down the line.

While Hungarian pay levels are still well below those in Western Europe, a survey by the German Chamber of Commerce has shown that strong wage rises are emerging as a key concern for German companies in Hungary.

German firms already project wage hikes of nearly 10% on average this year, the highest on record.

Mercedes-Benz said it would raise wages at its Hungarian factory as of July under a 2020 agreement, while rival carmaker Audi said it has lifted wages by more than a third for its workers in Hungary on average over the past three years.

“The fact that some 30% of workers say they are very strongly considering switching jobs should strike fear in employers’ hearts,” he said. – Rappler.com