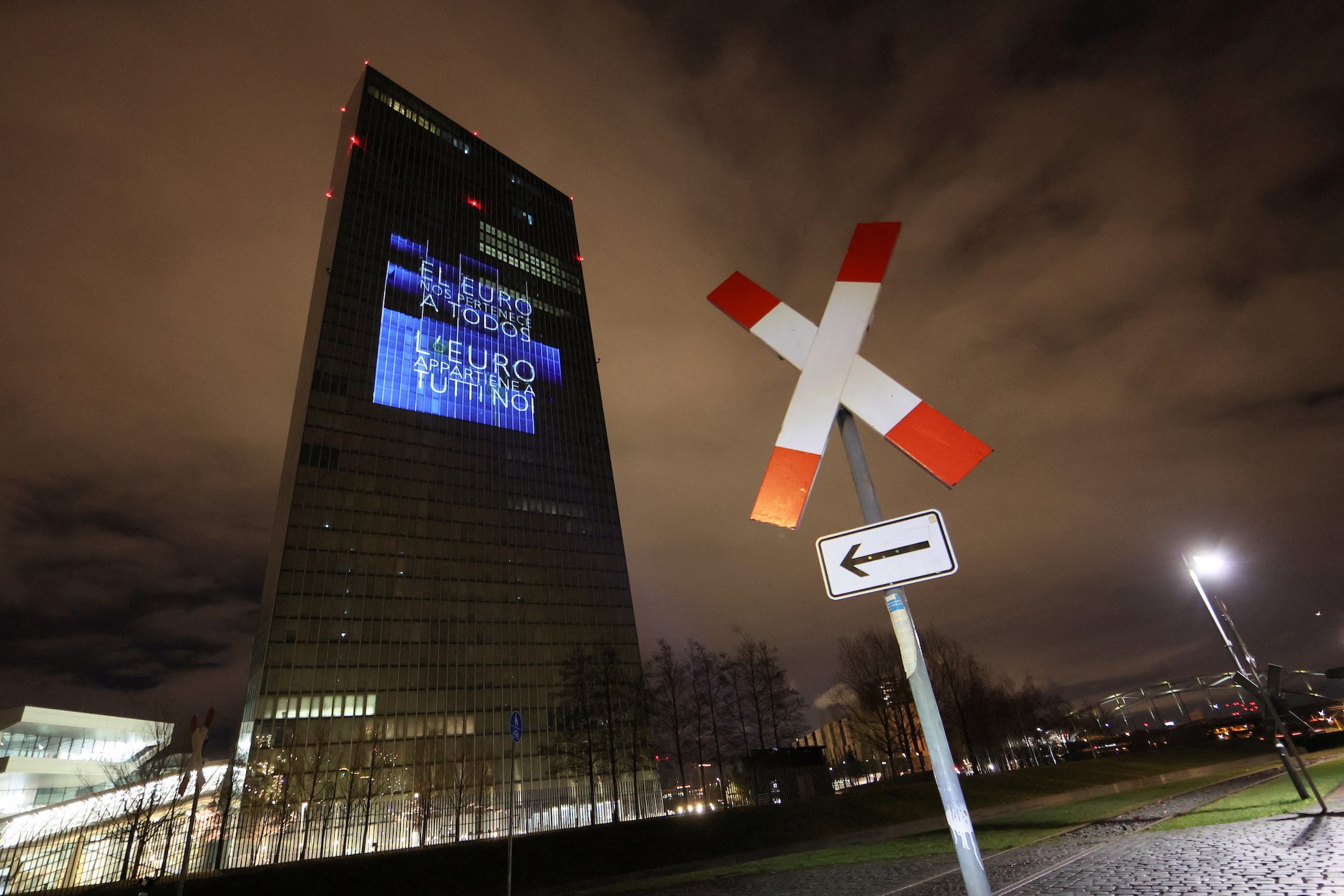 ECB. A symphony of light illuminates the south facade of the European Central Bank headquarters in Frankfurt, Germany, December 30, 2021.

European Union regulators have told some banks to scrutinize transactions by all Russian and Belarusian clients, including EU residents, to ensure that they are not used to circumvent Western sanctions against Moscow, three sources told Reuters.

The instructions from European Central Bank (ECB) supervisors mean tens of thousands of Russians and Belarusians living in the EU face intense surveillance by their banks, which are on alert for big payments and deposits as well as new credit applications, the sources familiar with the matter said.

While EU sanctions against Moscow exempt people holding temporary or permanent EU residence permits, they place some restrictions on access by Russian nationals to banking services, including preventing banks from accepting deposits above 100,000 euros ($110,000) from Russian nationals or entities.

The ECB move brings even EU residents under heightened scrutiny and would make it harder for them to operate bank accounts, with one of the sources saying some were already facing restrictions in Spain. This follows Moscow’s invasion of Ukraine, which the Kremlin describes as a special operation to demilitarize and “de-Nazify” the country.

The ECB is checking that banks which it supervises “have in place the necessary arrangements to adhere to the sanctions,” including with regards to transactions and relationships with clients, but it has not issued any guideline beyond the EU’s rules, a spokesperson for the Frankfurt-based central bank said.

Some ECB Joint Supervisory Teams, which include staff from the central bank and national authorities, have told banks to tighten control of EU residents too if they come from Russia or Belarus, the three sources, from banks and watchdogs, said.

While it is not the ECB’s role to police sanctions, the supervisors are concerned that banks in the bloc could incur hefty fines if their clients channel money on behalf of sanctioned individuals, two of the sources said.

Supervisors informed the affected banks between the end of February and early March and gave them a week to comply, two of the sources said, adding an audit of responses is planned. It was not immediately clear when this would be completed.

“At first, the measures were focused on those of Russian nationality, whether they were residents or non-residents, and later it was extended to Belarusians,” one of the sources said.

Most Russians living in the EU are resident in Germany, where Eurostat says there are more than 230,000, followed by Spain, with more than 81,000. Other popular places are France, Italy, Latvia, Czech Republic, Austria, and Finland.

Belarusians living in the EU are chiefly in Germany, Lithuania, and Italy, the Eurostat data shows.

In one instance, a Spanish bank has put around 8,000 Russian clients who are not on the EU sanctions list and are residing in Spain under surveillance, one of the sources said.

All new lending to Russians who do not have Spanish residency has been halted and at least one bank will not allow non-resident Russians to open new accounts, they added.

Italian banks, too, were monitoring all accounts above 100,000 euros held by Russian clients even if they were living in the EU and were not on the sanctions list, a fourth source familiar with the situation said.

Asked if lenders were intensifying scrutiny of Russian clients, the Bank of Spain told Reuters that both supervisors and banks were “carrying out the necessary controls to assess the situation and the possible existing risks.”

While the banks affected do not have to stop transfers, the first three sources said they must make additional checks to establish the source of the money, its destination, and purpose.

Supervisors also told banks they should take extra care with loan applications from Russians or Belarusians, they added.

However, one of the sources said there is nothing to stop banks from granting credit to a well-established Russian customer who is not subject to sanctions. – Rappler.com