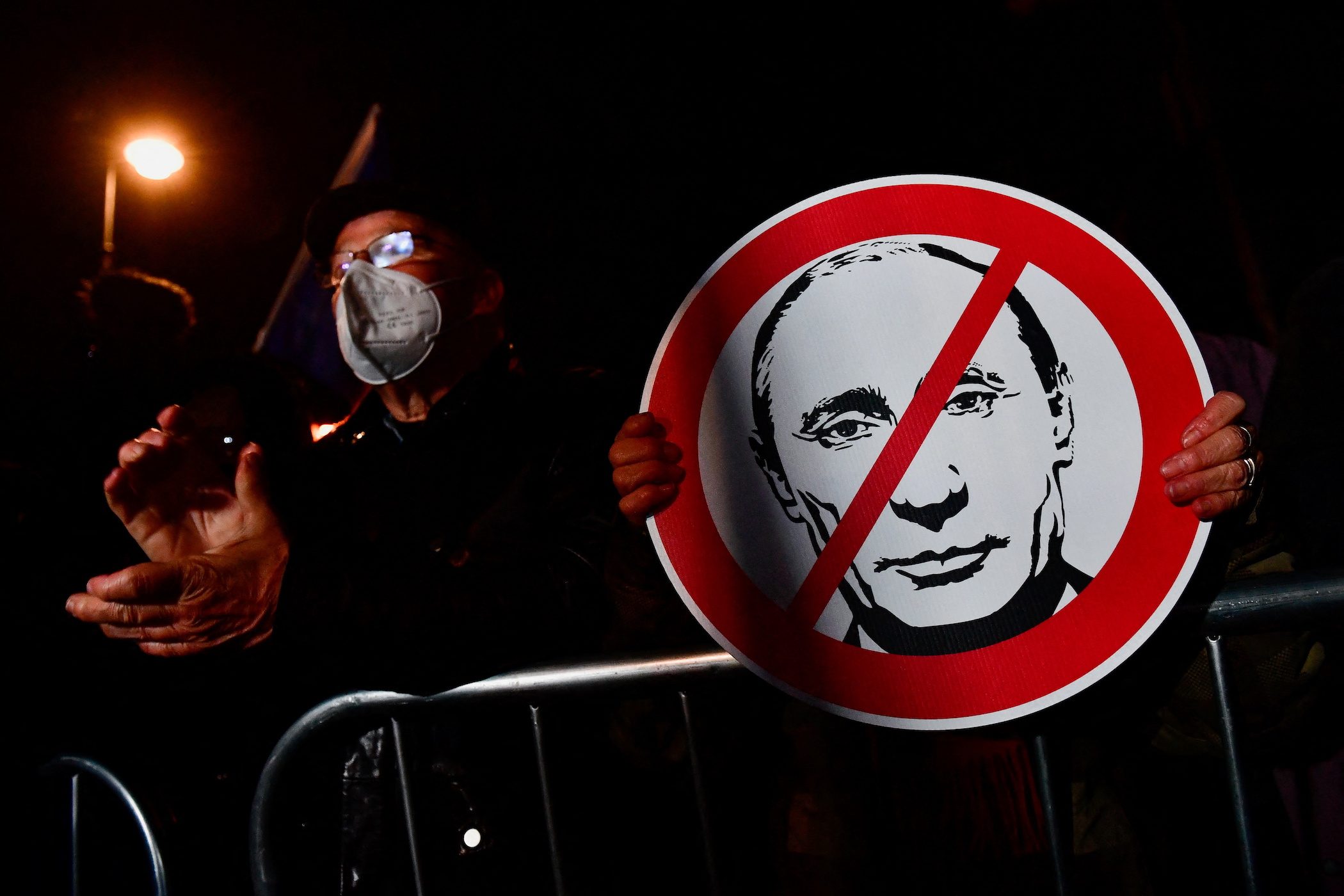 NO TO PUTIN. A person holds a sign during a protest organized by Hungary's opposition members, outside the headquarters of the Moscow-backed International Investment Bank, after Russia's invasion of Ukraine, in Budapest, Hungary, March 1, 2022.

WASHINGTON, USA – Russia’s war in Ukraine has “horrified” the World Bank‘s shareholders and will have lasting consequences for Russian President Vladimir Putin and Russia’s standing on the global stage, the global lender’s president said on Friday, March 4.

World Bank President David Malpass told Fox Business Network that China’s reaction to the war and the Western sanctions imposed on Moscow would be influential in determining how Russia’s future trade relationships develop.

“There’s a global outpouring in favor of Ukraine, and that will have lasting consequences, whatever the outcome of the war,” Malpass said, citing what he called “a very clear focus on Putin being the source of the problem.”

He listed previous Russian invasions, including of Hungary in 1956, Czechoslovakia in 1968, and Georgia in 2008 and the annexation of the Crimea region of Ukraine in 2014, but said the current war was far broader.

“This is an order of magnitude worse in terms of the decimation and the deaths that are occurring, so I think there will be lasting consequences,” he said.

Malpass said he would speak with Ukrainian President Vododymyr Zelenskiy later on Friday and planned to submit to the World Bank’s board on Friday a loan package for Ukraine that has been expanded with country contributions and has been coordinated with “people that are in bunkers in Ukraine.”

Reuters reported on Thursday, March 3, that the package had grown to 460 million euros ($503 million). Malpass said the goal was to get the money to Ukraine as early as next week.

Malpass, a former US Treasury official, said the financing for Ukraine would be “for payment of the ongoing – call it war effort – the ongoing development effort and the medicine efforts that they need to do as a government.”

Russia’s global financial isolation intensified on Friday as the London Stock Exchange suspended trading in its last Russian securities and as Europe, the United States, and other countries continued to roll out financial sanctions on Russia.

Malpass said the raft of sanctions were having a significant impact on Russia’s interactions with financial markets, while raising questions about its dependence on China and delivering a huge supply shock to world energy and food markets.

China, a major shareholder in the World Bank, had to be “horrified at where this is developing,” Malpass said, adding: “That’ll be an important issue in how world trade develops. They buy oil from Russia when the sanctions are in place, but can the companies really remain part of the world system when they’re so engaged with Russia? We’ll have to see how that evolves.” – Rappler.com