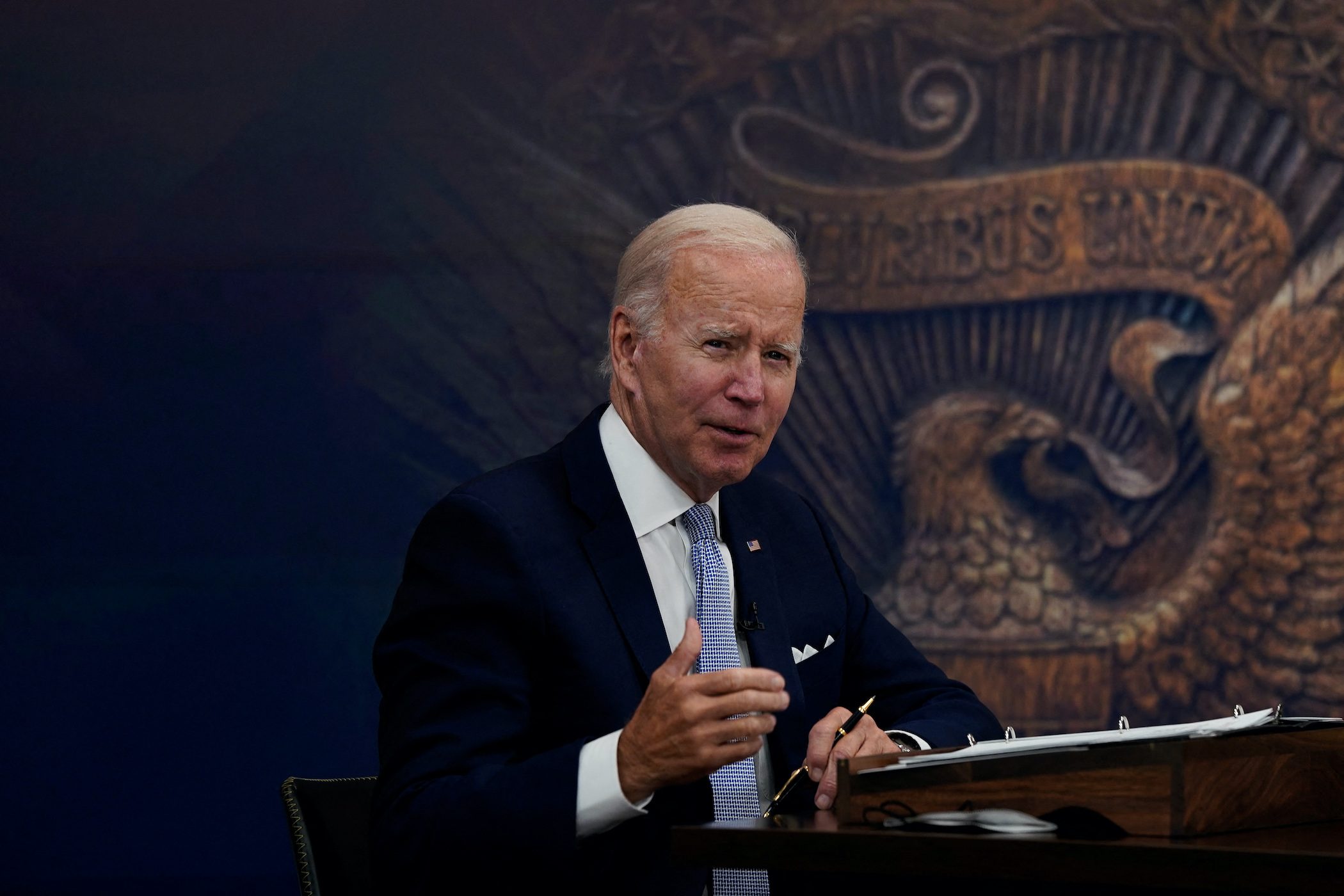 ECONOMIC CONDITIONS. US President Joe Biden listens as he receives an update on economic conditions from his advisors in the Eisenhower Executive Office Building's South Court Auditorium at the White House in Washington, July 28, 2022.

WASHINGTON, USA – President Joe Biden tried to soothe Americans’ worries about the strength of the economy on Thursday, July 28, after new data showed it had contracted for two quarters in a row.

Biden and top White House officials touted several positive facts about the US economy, including that employers are still hiring, unemployment is at 50-year lows, and manufacturers are still investing.

“That doesn’t sound like a recession to me,” Biden told reporters.

Anxieties about the economy could tank Biden’s fellow Democrats during the November 8 midterm elections for control of Congress.

The president’s approval rating has fallen to a record low of 36%, according to Reuters/Ipsos polling, with the economy listed at the top of voters’ concerns as higher grocery, gas, and housing bills mount.

While the second straight quarterly decline in gross domestic product (GDP) meets a standard shorthand definition of a recession, the White House, the Federal Reserve, and many economists believe the broader conditions are not close to being met, given strong consumer spending and job markets.

Biden aides attribute the lower growth to the Federal Reserve hiking interest rates four times this year to curb decades-high inflation, and what they hope is a short-term trend of businesses slowing down on restocking their inventories, after overcompensating for shortfalls earlier during the COVID-19 pandemic.

“It’s no surprise that the economy is slowing down as the Federal Reserve acts to bring down inflation,” Biden said in an earlier statement. “We are on the right path and we will come through this transition stronger and more secure.”

New Department of Commerce data estimated that GDP fell at a 0.9% annualized rate last quarter, after economists saw the figure ticking up by 0.5%.

The Fed said on Wednesday, July 27, that economic activity has weakened as it continues to raise rates in a bid to tame inflation that has reached 40-year highs, but Chairman Jerome Powell said there were too many points of strength for the US to be in a recession.

The Republican Party has used high inflation and economic weaknesses to attack Biden’s economic and spending priorities. The party has been scathing in its criticism of White House attempts to push back on recession talk.

On Thursday, Biden appeared to be on the verge of securing two economic policy victories in Congress.

On Thursday, the House of Representatives passed sweeping subsidies for the domestic semiconductor industry to compete with Chinese and other foreign manufacturers. Both were long-sought priorities of Biden.

Biden got word of the chips bill’s final passage while he hosted a roundtable with business executives that was meant to tout the strong status of the American economy. An aide passed Biden a note with the vote tally, which the president announced to applause.

Even during a meeting with participants selected by the White House, Biden heard a mixed picture of the US economy, however.

Bank of America chief executive officer Brian Moynihan said US consumers are in a very strong position, with resilient incomes, few delinquencies, and a robust appetite to consume, but he said gas prices continued to bite.

Administration officials have also been working to dissuade people from declaring a recession too soon to avoid a self-fulfilling prophecy as businesses and consumers, concerned that tougher times are ahead, cut back on spending and investment plans.

Job growth averaged 456,700 per month in the first half of the year, while domestic demand has continued to grow. Department of Labor data on Thursday showed initial claims for state unemployment benefits decreased a bit. Still, over the past month the number has been trending higher, suggesting the job market may also be slowing. – Rappler.com