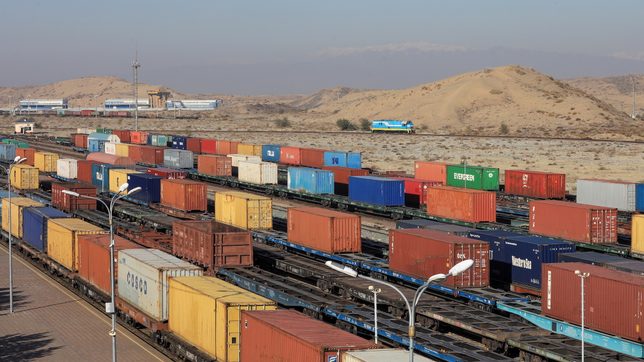 BOTTLENECK. Trains loaded with containers are seen at the Altynkol railway station near the Khorgos border crossing point on the border with China in Kazakhstan, October 26, 2021.

Facebook Twitter Copy URL
Copied
Some 5,000 railcars of Kazakh goods are rotting away on the Kazakh-China border

Frustrated Kazakh traders are demanding their government block the passage of Chinese cargo trains to Europe until Beijing resolves a bottleneck on the Kazakh-China border that has left thousands of wagons stranded.

It is unclear whether the Central Asian nation is ready to use such tactics, but it has stepped up negotiations with China to resolve the logjam.

Some 5,000 railcars of Kazakh goods are now rotting away on the border, according to official data.

Railway shipment volumes have soared this year due to skyrocketing maritime shipment prices and port capacity issues worldwide. But because China uses a different track width from Kazakhstan and Europe, trains need to either get their chassis changed or to pass on their cargoes to other trains at the border.

Both approaches turn the border into a bottleneck, and Beijing has prioritized European shipments over Kazakh ones, Kazakh state railways firm Kazakhstan Temir Zholy said.

“A railcar of linseed is worth $21,000, while a railcar of electronic components is worth between $800,000 and $1 million,” said grains and oilseeds trader Yevgeny Karabanov.

The only way to force China to resume Kazakh cargo shipments is to threaten it with blocking the European transit, he said, a position shared by dozens of companies and lobby groups which have appealed to the Kazakh government.

Trains loaded with Chinese goods, such as electronic components, worth tens of millions of dollars cross the border to Kazakhstan every day en route to Europe.

The Chinese authorities cite COVID-19 restrictions as the reason behind the slow processing of Kazakh cargoes. – Rappler.com