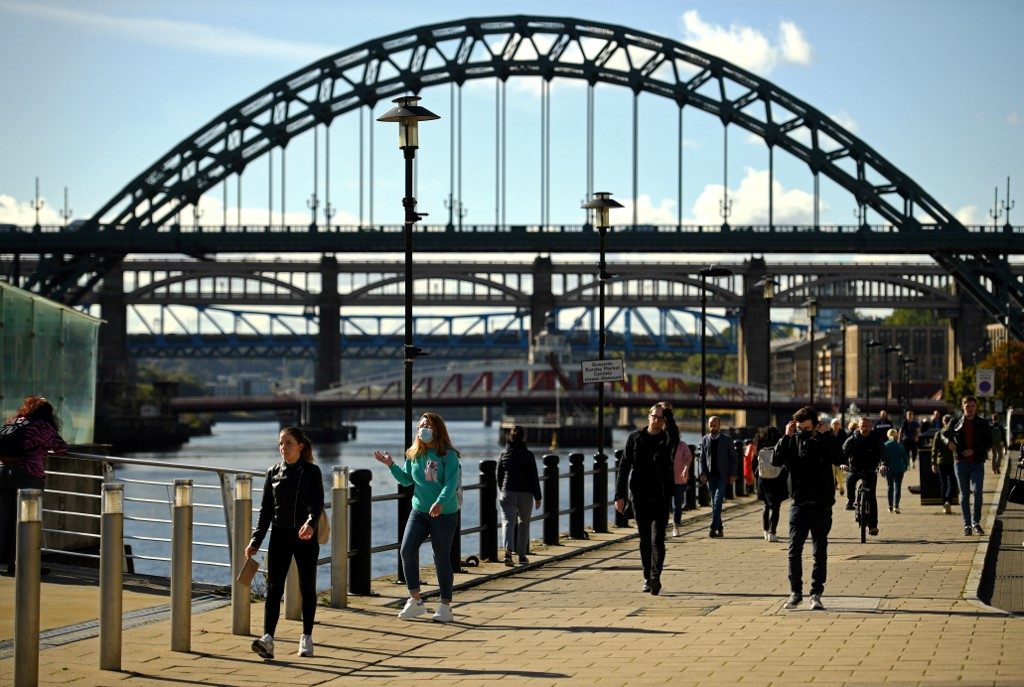 People walk along the bank of the River Tyne in Newcastle, England, on September 29, 2020, after tighter restrictions were put in place to help mitigate the spread of COVID-19. - More than two million people in northeast England face new restrictions because of a surge in coronavirus cases, the government announced on Thursday, as it battled to contain a potential second wave of infection. Tighter regulations on socialising are due to come into force from Friday in Northumberland, North and South Tyneside, Newcastle-upon-Tyne, Gateshead, and County Durham. Residents will be banned from socialising in homes or gardens with people from outside their household, while food and drink venues will be restricted to table service only. (Photo by Oli SCARFF / AFP)

Facebook Twitter Copy URL
Copied
'Planning for the worst is important, but needs to be accompanied by hope for the best,' says Bank of England chief economist Andy Haldane

As official data confirmed that Britain’s economy shrank by around one-fifth in the 2nd quarter, a speech by Andy Haldane said that “avoiding economic anxiety is crucial to support the ongoing recovery.”

Britain, he said, was in fact facing “the unholy trinity of risks from COVID, unemployment, and Brexit.”

He added: “If the economy were sat on a psychiatrist’s sofa, the diagnosis would not be especially difficult.

“A propensity to dismiss good news and dwell on bad? To catastrophize about the future? The sense of events being beyond our control?

“These are the psychological symptoms of anxiety. And collective anxiety is as contagious, and could be as damaging to our well-being, as this terrible [COVID-19] disease,” added Haldane, who is also a member of the BoE’s monetary policy committee.

In his speech entitled “Avoiding Economic Anxiety,” Haldane said “averting an economic anxiety attack calls for a balanced and flexible approach to the words and actions of businesses and policymakers.”

He added: “Planning for the worst is important, but needs to be accompanied by hope for the best.”

This despite Haldane repeating in his speech the BoE’s forecast that UK unemployment would surge in the coming months – and confirming that the central bank could use “negative rates as a potential tool” to support the economy.

Prime Minister Boris Johnson’s government has pumped billions of pounds into supporting jobs during the pandemic, but its furlough scheme will from November be replaced by a much smaller package of support.

With the pandemic sending Britain’s total debt above £2 trillion ($2.53 trillion, 2.16 trillion euros) for the first time – more than its annual gross domestic product – the government is looking to keep a lid on its soaring deficit.

One advantage the state has is that interest rates are at historic low levels, with the BoE’s main borrowing cost having been slashed to just 0.1% to support the economy through the pandemic.

Whether the central bank headed by Governor Andrew Bailey decides to go negative is far from clear, however, despite currently exploring “how a negative bank rate could be implemented effectively,” according to minutes of its last policy meeting in September.

While negative rates are seen as a way to encourage the consumer to spend rather than save, they do not “help create a healthy banking system as it increasingly squeezes lenders’ profitability,” Craig Erlam, analyst at Oanda trading group, told Agence France-Presse on Wednesday.

While banks’ bumper profits leading to huge bonus payouts are often criticized, lenders have since the 2008 financial crisis faced strict demands from regulators to improve their capital cushions. – Rappler.com

US and Taliban make progress on Afghan reserves, but big gaps remain