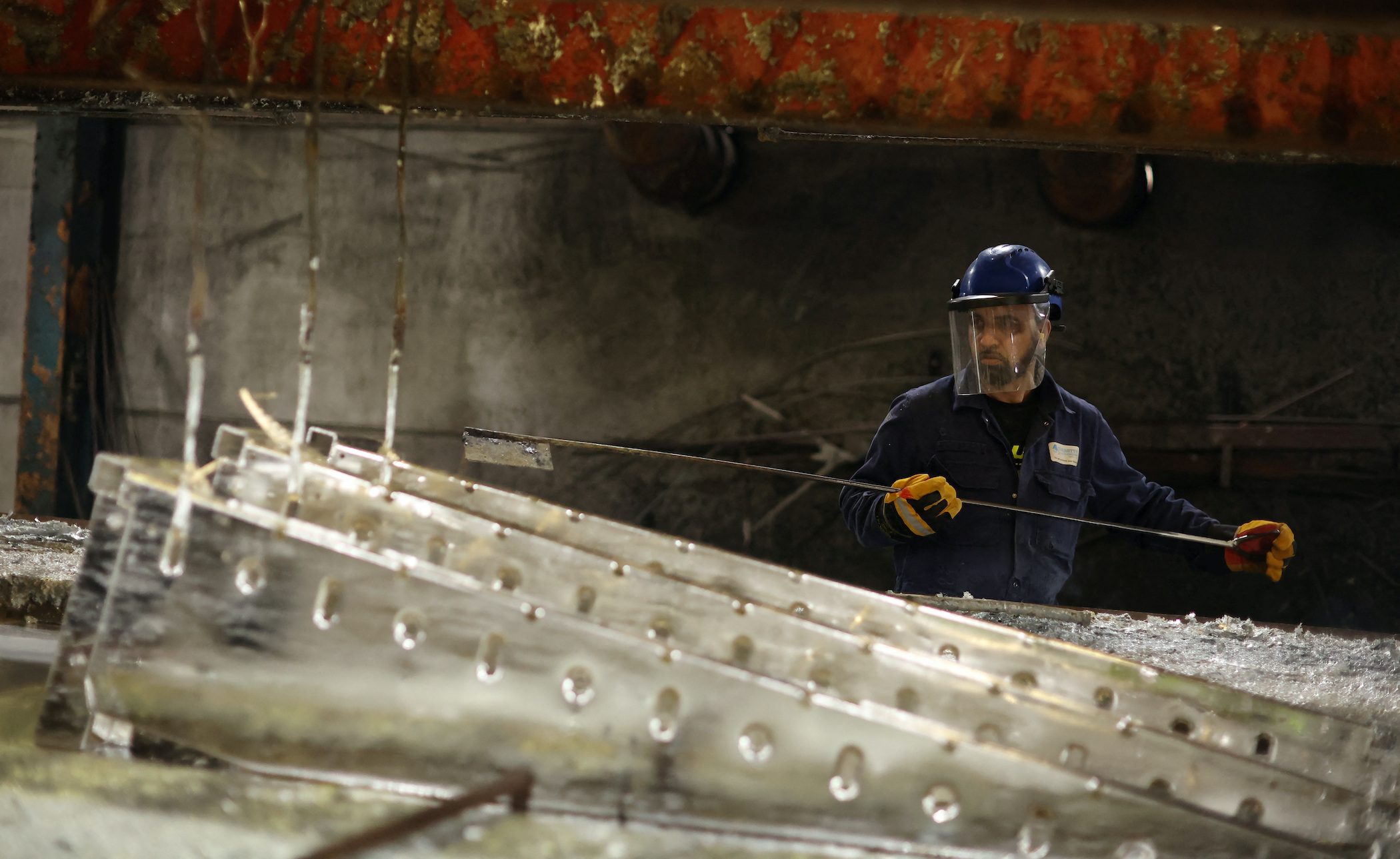 GALVANIZER. A worker removes pieces of metal from the galvanizing bath inside the factory of Corbetts The Galvanizers in Telford, Britain, June 28, 2022.

Facebook Twitter Copy URL
Copied
Britain's labor shortages, and the pressure they are putting on pay, are a major worry for employers and for the Bank of England as it tries to contain the biggest surge in inflation in 40 years

TELFORD, United Kingdom – British manufacturing firm Corbetts The Galvanizers used to rely on a stream of workers from Poland and Romania to fill its shop floor, where steel is dipped into a long vat of molten zinc at temperatures of around 450°C (842°F).

But after Brexit and COVID-19, it is resorting to everything from 500-pound ($602) starting bonuses to free fish and chips to entice local workers who shy away from the often grueling work.

Britain’s labor shortages, and the pressure they are putting on pay, are a major worry for employers and for the Bank of England as it tries to contain the biggest surge in inflation in 40 years.

However while there are losers, there are also winners from the shake-up in immigration rules following Britain’s departure from the European Union, which halted free movement of workers from the bloc after 2020.

Last year saw a record inflow of foreign medics, and more work visas were issued to people from Zimbabwe than France.

Corbetts, located in Telford in central England, close to the birthplace of the industrial revolution, is typical of firms now rethinking their recruitment practices.

Galvanizing staff mostly earn less than the 25,600 pounds a year generally needed for an employer to sponsor a visa.

Before Brexit, the 162-year-old company could count on migrant workers – mostly Polish or Romanian – recruited mostly by word of mouth.

But in the last year, finding staff has become a struggle, according to managing director Sophie Williams.

“It’s boiling hot in summer and it’s freezing cold in winter, and it can get really dirty and dusty and a bit smoky. It’s not the job for everybody,” she said.

Williams employs 52 galvanizers and wants to recruit 40 more before reopening a second facility that was mothballed during the pandemic.

Its Telford plant currently galvanizes 35,000 metric tons of steel a year in all shapes and sizes – from lampposts to chassis for horse trailers. That means automation is not an option.

To attract and keep staff while Britain’s unemployment rate is at its lowest since 1974 and cost-of-living pressures are pushing up private sector pay, Corbetts has offered a range of incentives.

As well as 500 pounds for new hires who stay six months – a bonus extended to existing staff – workers received 100 pounds to mark Queen Elizabeth’s 70 years on the throne, chocolate Easter eggs, supermarket vouchers at Christmas, and occasional perks such as free fish and chips.

It also recently raised its minimum starting rate of pay by 6.4% to at least 9.84 pounds an hour.

The firm is more flexible about who it hires, including workers aged under 21 who team up with an older employee, and its first female galvanizer.

Mike Fiddler, 27, who lost his job in construction during the pandemic, now works in Corbetts delivery yard while training to become a truck driver.

However Williams still doesn’t know if she can find enough staff to expand the business, which is aiming for 13 million pounds of sales in 2022.

British employers had a record 1.3 million job vacancies in the three months to the end of May – equivalent to 4.3 per 100 jobs, a similar picture to Germany. Vacancy rates are even higher in the Netherlands, Belgium, and the United States.

However, Britain’s vacancy rate is much higher than the overall EU average of 2.9.

With official data showing 188,000 fewer EU workers in Britain than two years ago, businesses are in no doubt that Brexit is partly to blame.

“The barriers to entry in terms of employers hiring from Europe are much higher now,” said Neil Carberry, chief executive of the Recruitment and Employment Confederation.

Sectors which once relied heavily on EU workers – such as construction, cleaning, and hospitality – saw the greatest shortages and faster pay rises between 2019 and 2021, according to research from recruitment website Indeed.

Conversely, it is now easier for workers from outside the EU to move to Britain, as employers no longer have to show they had no qualified British or EU applicants. Over the past two years the number of non-EU workers in Britain has risen by 220,000.

IT and professional and financial services companies are among the commonest sponsors of work visas.

But Britain’s growing reliance on foreigners to provide health and social care is another driver of the surge in non-EU migrant workers, said Indeed economist Jack Kennedy.

Overall around 10% of interest in British health and social care roles is from overseas, up from under 2% in 2019.

“That’s higher, a lot higher, than what we saw in any of the EU countries,” Kennedy said. – Rappler.com