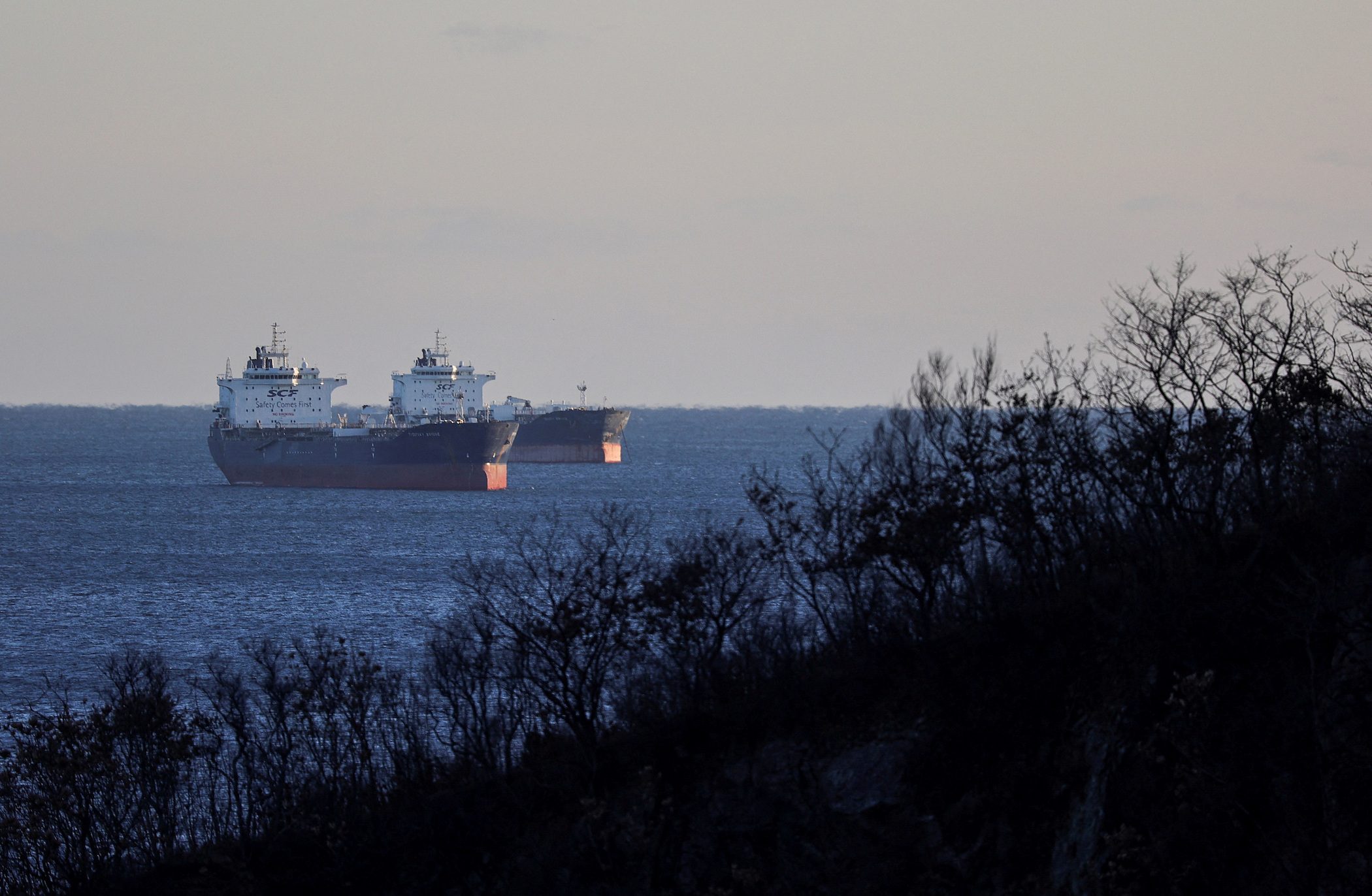 Facebook Twitter Copy URL
Copied
With new entrants keen to get a slice of the Russian business, secondhand oil tanker prices have surged

LONDON, United Kingdom – The market for old oil tankers is booming, and it’s all down to efforts by Western nations to curb trade in Russian crude.

As Western shipping and maritime services firms steer clear of Russian oil to avoid falling foul of sanctions or harming their reputations, new companies have leapt into the void, and they’re snapping up old tankers that might normally be scrapped.

The European Union banned all seaborne Russian crude imports from Monday, December 5, with a fuel import ban to follow in February.

It also banned companies and individuals in the bloc from providing financing, brokerage, shipping, and insurance services to ship Russian oil elsewhere if the crude was bought above a price cap of $60 a barrel that came into effect on Monday.

In recent months, aging tankers have been sold by Greek and Norwegian owners for record prices to pop-up Middle Eastern and Asian buyers taking advantage of sky-high charter prices for vessels willing to ship Russian oil to India and China.

Tanker management companies such as Fractal Shipping, run out of the Swiss financial hub of Geneva, are reaping the rewards.

In less than a year, Fractal has put together a fleet of 23 oil and fuel tankers bought recently by owners in Dubai. Most are taking Russian crude from Baltic and Black Sea ports to Asia, Refinitiv Eikon ship tracking showed.

Chief executive Mathieu Philippe said he launched the idea for Fractal a year ago, betting that the global tanker fleet was getting stretched and that both the cost of vessels and freight rates would inevitably rise from pandemic lows.

But, by the middle of this year, new ship owners, known as principals, started asking him to get into the Russian oil business.

“We were given a lot of tankers in August and September. Our principals wanted to come into the business for the Russian opportunity,” the shipping industry veteran told Reuters.

Major Western oil companies typically stop using tankers when they are about 15 years old, and many would be scrapped. Fractal’s fleet, meanwhile, consists entirely of older vessels ranging from 13 to 19 years, Fractal’s website shows.

With new entrants keen to get a slice of the Russian business, secondhand oil tanker prices have surged, especially for Aframax vessels that can carry up to 600,000 barrels, the standard size used for loading crude at Russia’s Baltic ports.

The price tag for 20-year-old Aframaxes has jumped 86% from $11.8 million on January 1 to $22 million now, according to valuation company VesselsValue.

So far this year, 148 Aframax sales have been reported, a 5% increase from the same period in 2021, VesselsValue said.

Research by ship broker Clarksons showed that more tankers were sold in the first 11 months of 2022 than any full year previously and sales in October set a new monthly record of 76.

Up until Monday, there were no Western sanctions on transporting Russian oil to Asian markets, so Fractal and other management companies had not breached any rules.

To avoid potential pitfalls, though, Philippe said Fractal does not deal with any Russian-owned companies. That would also be a no-go for Western banks financing maritime trade, he said.

To prevent the new EU sanctions from halting millions of barrels per day of Russian crude exports and driving up global fuel costs, the Group of Seven (G7) rich nations has mitigated its impact by permitting exports below a cap of $60 a barrel.

The aim of the plan is reduce Russia’s export revenue but keep oil supplies flowing.

The agreement on the price cap means operations such as Fractal’s can carry on shipping Russian crude without any issues, as long as the deals are below the cap.

The Kremlin has repeatedly said it will not sell oil below the new price cap while Russia’s two biggest buyers, China and India, have not promised to abide by the limit. New ship owners willing to transport Russian oil are cashing in. “Ships earning $80,000 a day in the Mediterranean can make $130,000 a day if they carry Russian oil,” said one ship broker, who declined to be named as he was not authorized to speak to the media.

Crude tanker rates have jumped to highs not seen since 2008, aside from a brief period in 2020 when oil firms scrambled for tankers to store fuel as demand crashed due to the pandemic.

Tanker owners can make more than $100,000 a day for some journeys, said Omar Nokta, analyst at investment bank Jefferies.

“While it remains to be seen how the price cap on Russian exports will ultimately play out, what is clear is that the tanker fleet is becoming stretched and traveling longer distances,” he said.

More tankers are now being used for voyages taking weeks, shipping Russian oil from the Baltic and Black Sea to Asia, whereas Russian oil was mainly sold in Europe previously and the voyages only took a few days.

Shipbuilding also stalled during the pandemic and deliveries of new oil tankers next year are set to be historically low, according to analysis from shipping brokers.

For instance, the Fractal-managed Charvi tanker loaded crude at Russia’s Baltic port of Primorsk in the middle of September before sailing to discharge its cargo in Sikka, India.

The tanker formerly owned by Norway’s Viken Shipping under the name Storviken had never previously called at a Russian port, Refinitiv Eikon data going back to 2010 showed.

Similarly, Daphne V, another tanker previously owned by Viken Shipping and now managed by Fractal, called at Primorsk on November 11 for the first time since the Ukraine war started and is heading to the Suez Canal en route to Asia.

The tanker was called Kronviken before it changed hands. Viken Shipping said it had not sold ships to Russian owners but declined to identify the buyers.

Ship broker Braemar estimated that about 120 of the 212 tankers sold to likely Russian buyers this year were looking at Russian crude oil trades, while there were virtually no sales last year to buyers involved in shipping Russian crude.

The US Treasury has provided some guidance about how the cap will work, but questions remain over its enforcement.

“The price cap is very confusing,” Fractal’s Philippe said. “We are definitely one of the companies that want to remain in the Russian trade. As businessmen we have to be opportunistic.”

Buyers must provide documents such as invoices to shipping companies or insurers to show they stuck to the cap but it will be essentially down to self-monitoring, with no penalties for providers of shipping services if they operated in good faith.

Deals shown to be outside the price cap would effectively break sanctions, and other vessels that have at some point been involved in circumventing oil export sanctions on Venezuela and Iran may well play a part in that trade, analysts say.

One aim of the G7 price cap plan is to prevent this so-called “dark fleet” getting bigger by allowing Russian oil exports to take place transparently without breaking sanctions.

This dark fleet, which accounts for about 10% of the world’s oil tankers according to Trafigura and other shipping industry sources, has helped Iran circumvent a US embargo for the better part of a decade, and Venezuela since 2019.

At least 21 tankers have switched to shipping Russian oil after previously being used for Iranian shipments, said Claire Jungman, chief of staff at US advocacy group United Against Nuclear Iran, which monitors Iran-related tanker traffic through ship and satellite tracking.

Of those vessels, at least have four changed ownership in recent months.

Ship broker Braemar also said that some of the vessels involved in shipping Iranian and Venezuelan oil were shifting to transporting Russian oil.

It estimated that the so-called shadow fleet shipping oil from those two countries and some of them also for Russia was made up of 107 Aframaxes, 65 larger Suezmaxes, and 82 VLCCs (Very Large Crude Carriers).

“If sanctions are continually adjusted, it becomes very difficult for the sanctions-compliant companies to take the risk because they don’t know what will happen tomorrow,” he said. – Rappler.com