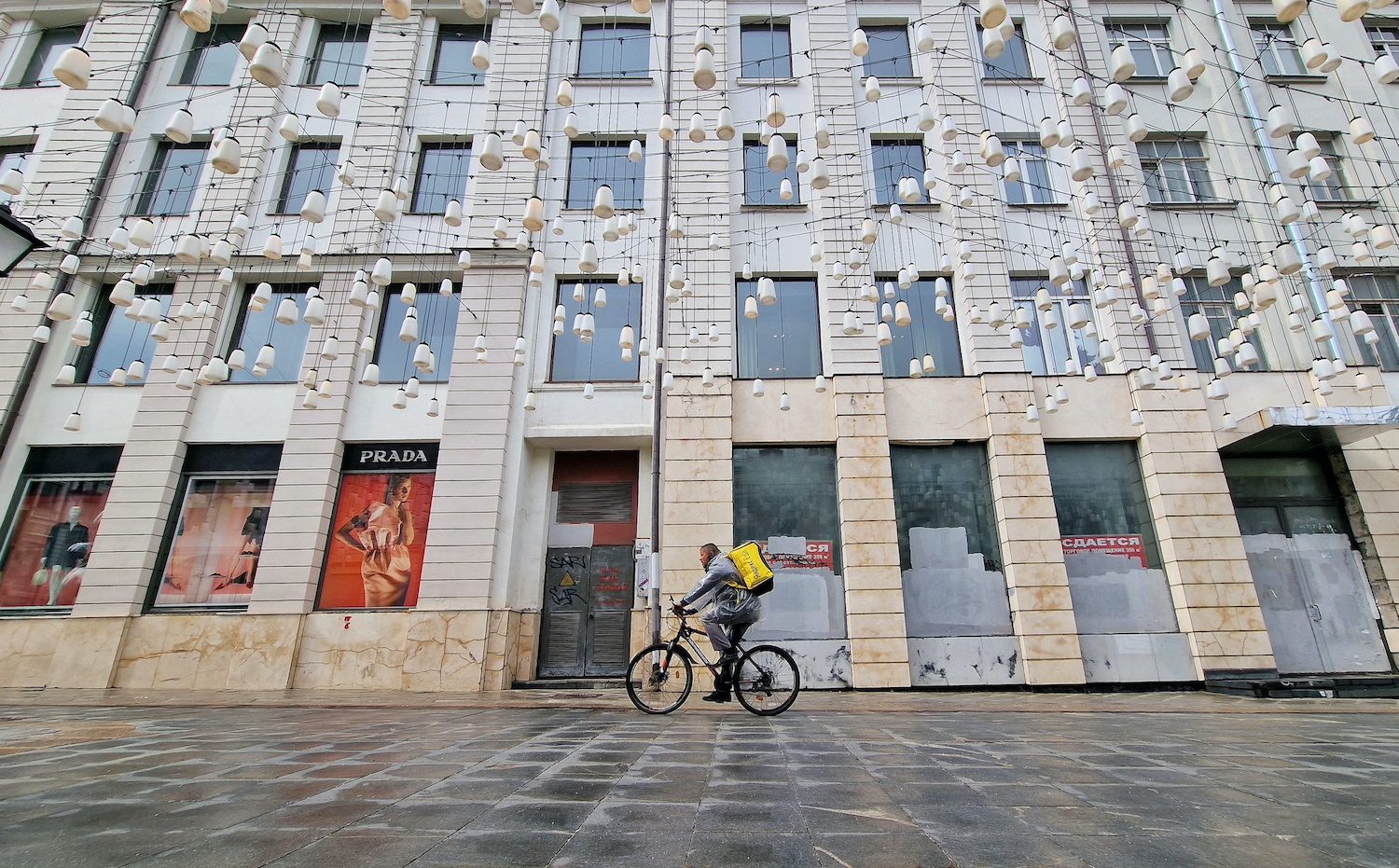 CLOSED. A Yandex Food courier rides a bicycle past the temporarily closed Prada shop and business property put out for rent, in Stoleshnikov Lane, which is one of the city's most expensive shopping areas, in central Moscow, Russia, May 27, 2022.

Facebook Twitter Copy URL
Copied
The full impact on Russian economic output and jobs from the withdrawal of Western firms, ranging from carmakers to banks, has yet to be seen

LONDON, United Kingdom – For Oleg Kechin, owner of a chain of barbershops, forecasts that Russia will be plunged into its deepest economic crisis in a generation feel overdone.

US President Joe Biden may have promised that Western sanctions would wreak economic havoc in Russia, but Kechin’s business is still drawing in customers in the town of Saransk, which lies 510 kilometers (320 miles) southeast of Moscow.

“There’s no deep crisis. In general, everything’s fine,” he said. “Everyone’s talking about a decrease in purchasing power, but I haven’t noticed it.”

Yet, such confidence may not be entirely well placed, if some indicators are to be believed. Trade with the outside world has plunged, consumers are reluctant to spend, and rising prices on basic items are starting to squeeze household budgets.

Russian officials insist the economy is holding up. The central bank slashed interest rates by three percentage points to 11% on Thursday, May 26, and expects to cut its forecast for inflation for this year from the current prediction of 18% to 23%.

Under capital controls and orders that exporters sell half their hard currency earnings, the rouble has rallied and, at about 66 to the US dollar, is stronger than before Russia sent its armed forces into Ukraine on February 24.

President Vladimir Putin, who has welcomed the departure of foreign firms which have sold up or just dumped Russian assets, said Russia could not be isolated from global trade.

But not everyone is convinced the economy will escape unscathed. Roman, a 25-year-old in Moscow, who asked not to be identified by his full name, said middle class life was not “drastically different” than before but he saw worrying signs.

“One thing that bothers me…is constant price rises for everyday goods and even vegetables. I think that signals the worst is yet to come.” he said. “The situation with the labor market in my sphere doesn’t make me very optimistic either.”

Economy Minister Maxim Reshetnikov said on Friday, May 27, there was a “demand crisis” in business and consumer spending.

Russia has stopped publishing most data on financial flows, but figures compiled by the Bank of Finland based on local customs data show imports have plunged – and not just from the West.

Chinese exports to Russia were down by a quarter in April and shipments from Vietnam, South Korea, Malaysia, and Taiwan more than halved, the bank said.

But inflation is still at its highest in two decades at more than 17%. That means a 10% hike in pensions and the minimum wage announced by Putin still leaves many facing a cut in household incomes in real terms.

Rising prices may not be Russia’s biggest problem. The strong rouble has already brought down weekly inflation sharply, but it won’t fend off a broader threat to economic output from Russia’s increasing isolation.

Reshetnikov said there were “fears that we could break into a deflationary spiral, when a reduction in money in the economy leads to a reduction in production, lower prices, and so on.”

Russia has already dipped into its National Wealth Fund, which has about $110 billion of liquid assets, to support spending, which is up 22% this year, the economy minister said.

The finance minister said Moscow had earmarked 8 trillion roubles ($123 billion) of stimulus for “the current circumstances,” although it was not clear how much of that was new money and over what period.

The full impact on economic output and jobs from the withdrawal of Western firms, ranging from carmakers to banks, has yet to be seen.

Sergei Guriev, economics professor at France’s Sciences Po, expected the impact to be felt more sharply in the next few months.

“The real pain has not started yet as some exiting companies are still paying wages and some companies continue production using their inventories of imported parts,” said Guriev, who is also a former chief economist at the European Bank for Reconstruction and Development.

Morgan Stanley economists see a 13% drop in household consumption in 2022 and a 23% fall in investment. The bank’s chief regional economist, Alina Slyusarchuk, said in a note that Russia’s potential long-term growth rate was now just 1%.

The outlook appears to be dimming for smaller Russian firms, although there is little way to gauge it precisely with so little official data now being published and businesses no longer required to report results.

“Businesses – especially small ones – will be engaged in pure survival, not developing or creating anything new.”

Survival mode, however, is nothing new to many Russians, who have lived through several deep crises since the collapse of the Soviet Union in 1991.

“The worst is ahead of us,” said Yevgeniy Sheremetov, who runs a tour company near Lake Baikal in Siberia. “But residents of this country are used to difficulties. I have my summer house, with potatoes and cucumbers. After the 1990s, nothing can scare me.” – Rappler.com