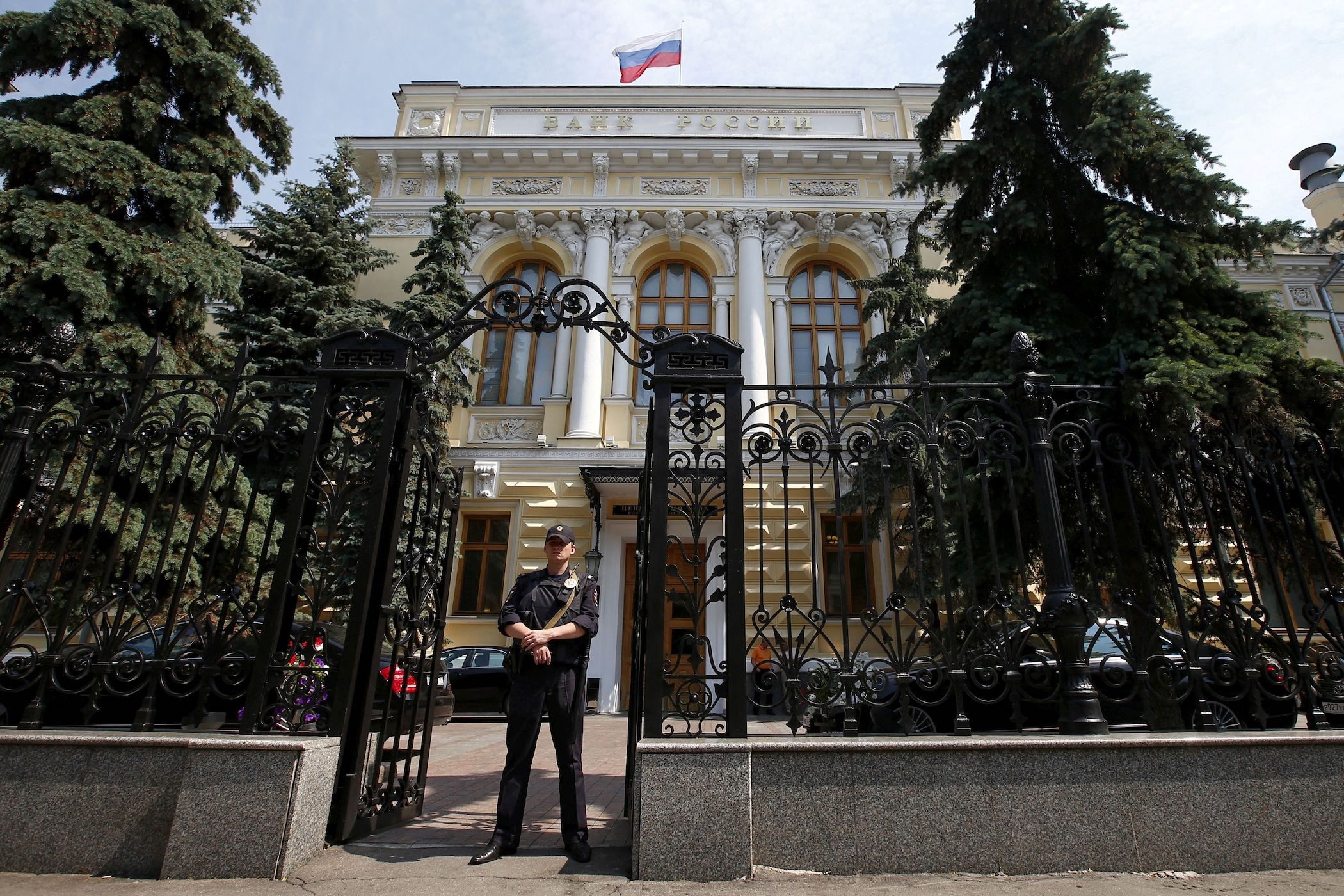 CENTRAL BANK. A policeman stands guard at the main entrance to the Bank of Russia in Moscow, Russia, June 15, 2015.

Russia’s central bank slashed its key interest rate to 11% on Thursday, May 26, and said it saw room for more cuts this year, as inflation slows from more than 20-year highs and the economy heads towards a contraction.

It announced the move, which followed two previous 300-basis-point cuts which took the rate to 14%, at an extraordinary meeting. The bank has been gradually reversing an emergency rate hike to 20% in late February that was triggered by Russia’s February 24 move to send tens of thousands of troops into Ukraine and the imposition of Western sanctions in response.

Governor Elvira Nabiullina said inflationary risks were easing, but warned that the economy was entering a period of structural transformation and that banks needed additional capital support.

Inflation expectations of households and businesses are falling, she told a banking conference in Moscow, helping to significantly lower inflationary risks.

The rouble’s recent appreciation to multi-year highs has had a significant, if temporary, disinflationary impact, she said.

The Russian currency has been supported this year by capital controls imposed in late February to cap financial stability risks and defend the economy against sweeping western sanctions.

“Thanks to these factors, inflation is falling faster than we expected,” Nabiullina said. “This allows us to lower the key rate today without creating new pro-inflationary risks.”

“We allow for the possibility of further easing of the key rate at upcoming meetings.”

The central bank said external conditions for the Russian economy are still challenging but financial stability risks have somewhat decreased, opening room for easing of some capital control measures.

“The first months [since February] were a time for tactical decisions: we had to counteract the first sanctions shock,” Nabiullina said. “We managed to protect financial stability and not allow an inflation spiral to unfold.

“But this, of course, absolutely does not mean that we can breathe easily.”

The rouble’s performance has “given policymakers room to reverse emergency measures introduced since February,” Capital Economics analysts said in a note.

“We suspect that the CBR won’t continue this pace of easing…. A further easing of capital controls and additional rate cuts seem likely,” they said.

The rouble extended intraday losses as Nabiullina spoke, sliding to 63.41 against the dollar, down 6.9% on the day.

The central bank could cut its key rate further by 50 to 100 basis points at the next rate-setting meeting scheduled for June 10, said Dmitry Polevoy, head of investment at LockoInvest.

Inflation is hovering near its highest since early 2002, although May 20’s reading of 17.51% marked a decline from 17.69% a week earlier, reflecting a fall in consumer activity.

High inflation dents living standards and has been one of the key concerns among Russians for years.

On Wednesday, May 25, President Vladimir Putin ordered 10% rises in pensions and the minimum wage to cushion Russians from inflation.

He denied the country’s economic problems were all linked to what Moscow calls its “special military operation” in Ukraine, which has prompted the West to impose unprecedented sanctions against Russian banks, companies, business leaders, and figures close to the Kremlin. – Rappler.com