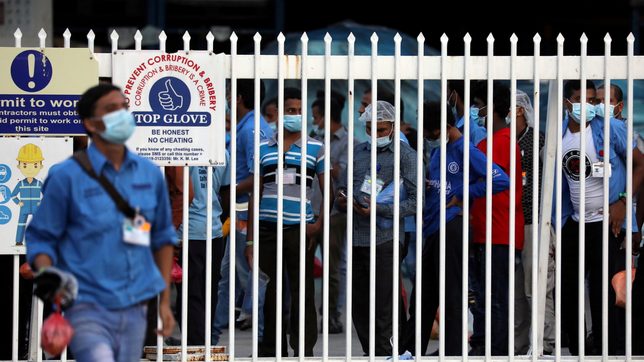 TOP GLOVE. Workers wait in line to leave a Top Glove factory after their shifts in Klang, Malaysia, December 7, 2020.

Top Glove Corporation Bhd, the subject of a US import ban over concerns about forced labor, is waiting for customs authorities there to verify remedial action it has taken on workers’ recruitment fees, the Malaysian firm said on Wednesday, June 9.

The world’s largest maker of medical gloves did not know when US Customs might lift the ban on its goods, but verification of the remediation payments is underway, said managing director Lee Kim Meow.

“We have no timeline given, but we have tried our best,” he told a results briefing, adding that Top Glove was liaising closely with customs, and hoped there were no further issues.

In April, Top Glove said it had resolved all signs of forced labor in its operations, a step verified by London-based ethical trade consultant Impactt Limited.

The company said removal of the ban would boost sales, which have suffered since shipments to the United States halted temporarily in its financial third quarter.

A 68% reduction in sales to North America was the main reason for volumes easing from the preceding quarter, it said.

The North American market accounted for just 8% of sales during the March-May quarter, down from 23% in the previous period. Total sales volume dropped 9% from a year ago, the firm added.

US Customs and Border Protection (CBP) told the country’s ports to seize Top Glove’s goods in March, after having barred import of its products last July, citing evidence of forced labor practices at production facilities across Malaysia.

Top Glove shares closed 1.3% higher on Wednesday. They have slumped more than 20% this year. The US action has also stalled Top Glove’s pursuit of a $1-billion listing in Hong Kong, as potential investors raised concerns about the impact, Reuters has reported.

Top Glove, which has net cash of 4.23 billion ringgit, has said regulators were reviewing its listing process and it was working closely with advisers.

“Listing in Hong Kong is for the longer term,” said executive chairman Lim Wee Chai. “[The CBP ban] caused us a delay in Hong Kong, [but it] is only temporary.”

On Wednesday, Top Glove reported a jump of 485% in third-quarter net profit benefiting from strong demand for gloves during the pandemic.

It had posted record profit for the four straight quarters prior, bolstered by greater use of gloves over hygiene concerns.

A stock exchange filing showed net profit for the period jumped to 2.04 billion ringgit ($495.63 million) from 347.9 million a year ago. UBS had forecast a profit of 2.54 billion ringgit, according to Refinitiv data.

Top Glove, which produces 100 billion pieces of gloves a year, said average selling prices declined during the period from February’s peak, and it had made adjustments in line with market pricing trends. – Rappler.com