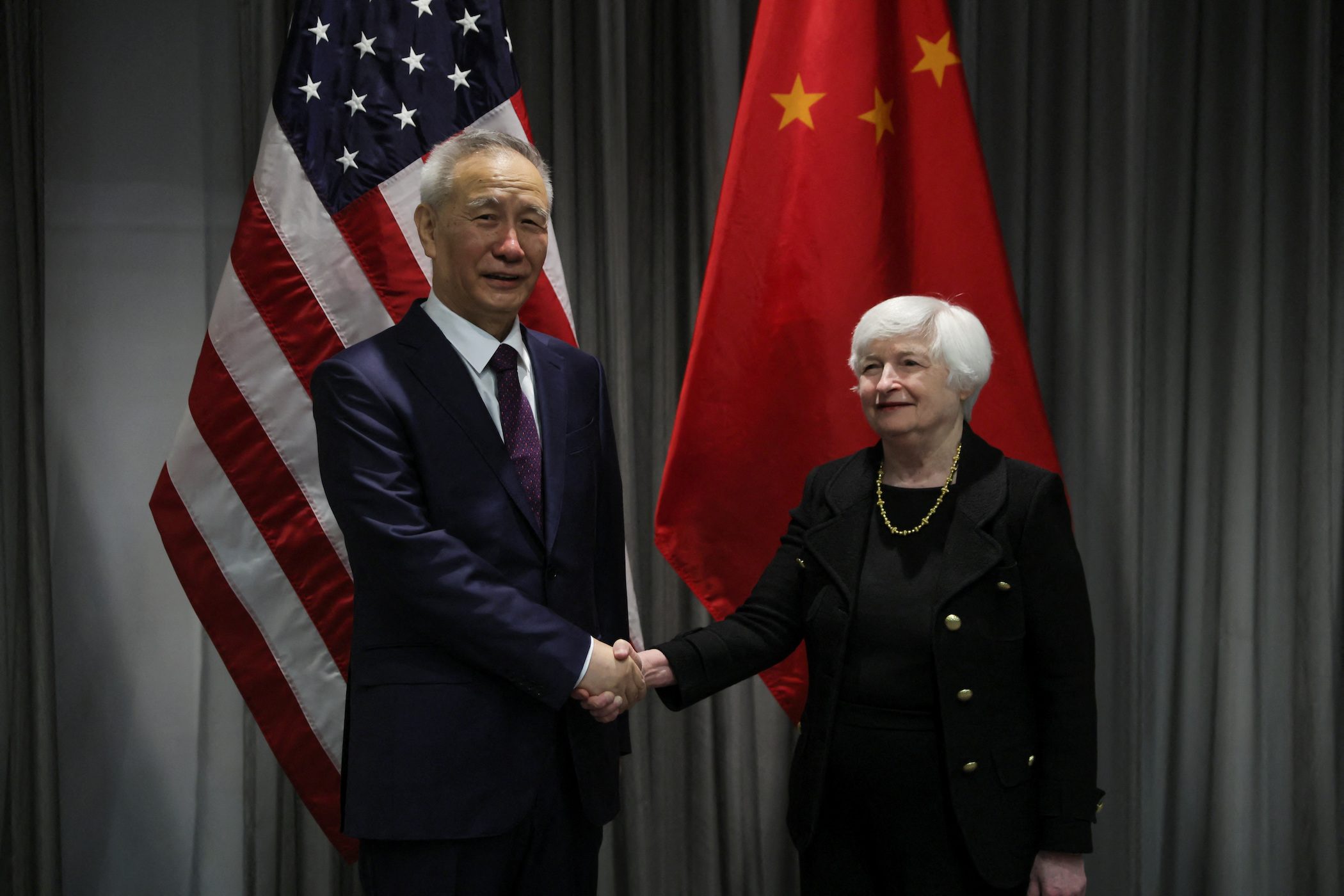 TALKS. US Treasury Secretary Janet Yellen shakes hands with Chinese Vice Premier Liu He as they meet for talks in Zurich, Switzerland, January 18, 2023.

Facebook Twitter Copy URL
Copied
'Both sides agreed it is important for the functioning of the global economy to further enhance communication around macroeconomic and financial issues,' the US Treasury says

ZURICH, Switzerland – US Treasury Secretary Janet Yellen agreed with Chinese Vice Premier Liu He to enhance communication about macroeconomic and financial issues during a “candid, substantive, and constructive” meeting in Zurich on Wednesday, January 18, the Treasury said.

In a statement, the Treasury said both sides agreed to enhance cooperation on climate finance on a bilateral and multilateral basis, such as within the United Nations, Group of 20 economies, and Asia-Pacific Economic Cooperation.

“While we have areas of disagreement, and we will convey them directly, we should not allow misunderstandings, particularly those stemming from a lack of communication, to unnecessarily worsen our bilateral economic and financial relationship,” Yellen said at the start of the meeting.

Liu said both countries need “serious communication” and coordination on issues including climate change and the economy, and that he was ready for an in-depth exchange.

“We do believe that we have to always bear in mind the bigger picture, try to manage our differences appropriately and seek common ground,” Liu said, speaking through an interpreter. “In this way, hopefully we can work together to maintain the overall stability of Chinese-US relations.”

US President Joe Biden and Chinese President Xi Jinping pledged to increase communication when they met in Indonesia in November.

“Both sides agreed it is important for the functioning of the global economy to further enhance communication around macroeconomic and financial issues,” the Treasury said after Yellen and Liu met.

“Secretary Yellen also raised issues of concern in a frank exchange of views,” it added. “She looks forward to traveling to China and to welcoming her counterparts to the United States in the near future.”

A senior Treasury official said that, during the meeting, which lasted nearly three hours, Yellen and Liu agreed that both countries could take steps to avert recessions in their own economies, and the two delegations had a productive discussion about sovereign debt issues, food security, and energy.

On economic prospects, Chinese officials were aware of financial risks posed by the property sector but were optimistic about resuming closer to normal growth, the official said of the meeting, the first in person since Yellen became secretary.

The China side expressed concern over US economic, trade, and technological policies towards China and its hope that the US will pay attention to how such policies were affecting both countries, China’s Ministry of Commerce said in a statement.

“China welcomes Yellen to visit China at an appropriate time this year. Both countries agreed that their economic and trade teams will continue to maintain communications and exchanges at all levels,” it said.

Washington in October imposed export controls on China to slow Beijing’s technological and military advances, including measures to curb China’s access to US chipmaking tools and cut it off from certain chips made anywhere in the world with American equipment.

Liu, a confidant of Xi, on Tuesday, January 17, urged global leaders gathered in Davos for the World Economic Forum to abandon what he called a “Cold War mentality” and expand international cooperation on issues such as climate change.

Yellen and other top US officials say the US economy should be able to skip a recession in 2023, but acknowledge slower growth is likely.

China’s economic growth looks set to rebound from mid-2023 following relaxed COVID-19 curbs after slumping to one of its worst levels in nearly half a century.

The International Monetary Fund has warned against decoupling the global economy into two competing blocs, saying it could reduce global economic output by up to 7%, and even more in vulnerable countries.

Yellen’s meeting with Liu came before a three-country visit to Africa, where she will push to expand US trade and business ties with the continent, which China has long dominated.

She is also expected to repeat her criticism of Beijing – now the world’s largest creditor – for not moving more quickly to provide debt relief, as well as its use of forced labor in China’s Xinjiang region and “non-market” economic practices.

Yellen has met virtually three times with Liu since taking office, and met in Bali, Indonesia, with Chinese central bank governor Yi Gang. Liu will step down this year as part of an overhaul of China’s economic leadership disclosed in September.

In December, Yellen told reporters she was also open to visiting China and looked forward to more “intense interactions” with Chinese officials. – Rappler.com