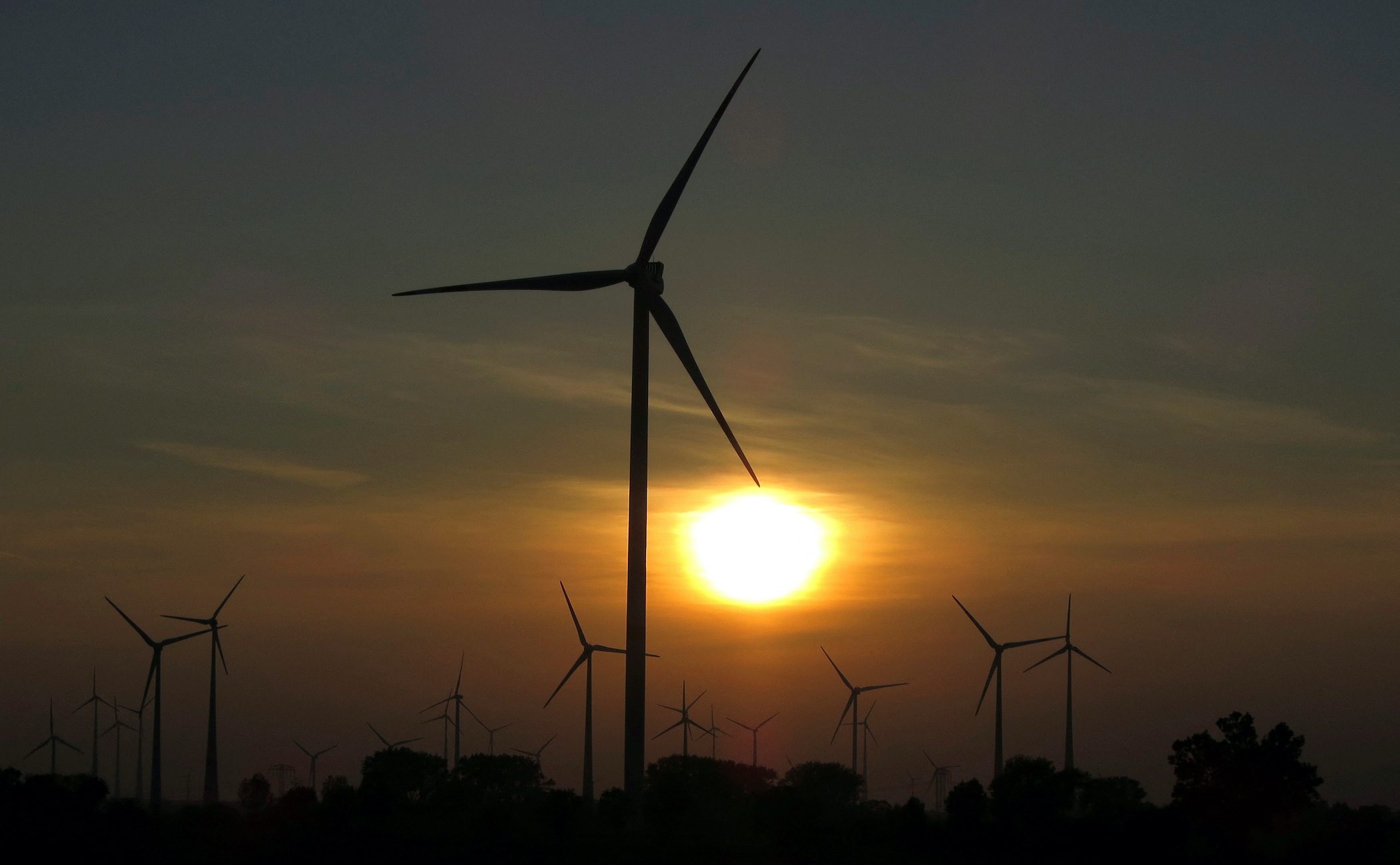 ENERGY. The sun sets behind power-generating wind turbines from a wind farm near the village of Ludwigsburg, Germany, October 5, 2014.

Facebook Twitter Copy URL
Copied
Germany is racing to wean itself off Russian gas supplies. Its north coast will be at the heart of those efforts.

BERLIN, Germany – Germany’s wet and windswept north has long lacked the economic appeal of the industrial south but the green transition and an energy crisis sparked by war in Ukraine is shifting the balance.

When Northvolt sought a German site to build its first battery plant outside Sweden, it didn’t pick the southern industrial heartlands, instead it chose to be near the blustery North Sea coast where the wind power industry has taken off.

“Battery manufacturing is tremendously energy-intensive,” said Jesper Wigardt, Northvolt’s head of public affairs. “If you look at this part of Germany, it’s interesting in terms of energy, but also the type of energy in the grid.”

Northvolt’s decision was announced on March 15, just as an energy crisis was unfolding, sparked by Russia’s invasion of Ukraine. As the West has ratcheted up sanctions on Moscow, Russia has steadily reduced pipeline gas supplies to Europe.

“In reality we never got cheap gas from Russia,” said Foreign Minister Annalena Baerbock. “We paid for each cubic meter of Russian gas twice or three times over in costs to our national security.”

Germany, heavily reliant on Russian gas in the past, is racing to wean itself off Russian supplies. The north coast will be at the heart of those efforts, both for generating more renewable energy and importing gas as fuel in the transition away from nuclear power and heavily polluting coal-fired plants.

Two floating terminals to receive liquefied natural gas (LNG) will be up and running on the North Sea coast within months, stopgaps until permanent ones are built there.

The northern states of Lower Saxony, Schleswig-Holstein, and Mecklenburg-Vorpommern already produce half of Germany’s 64 gigawatts of wind energy, now mostly land-based. But these coastal states will play an even bigger role as Germany expands offshore wind generation to 70 GW by 2040 from 7.7 GW now.

The south, which powered Germany’s economic revival after World War II and which is home to industrial giants like BMW and Siemens in Bavaria and Mercedes in Baden-Wuerttemberg, now faces a rival in the north.

It is shifting the compass on Germany’s traditional tussle between the wealthy West and poorer, post-Communist East.

“There is a huge, silent power struggle underway between north and south,” said the premier of one German state, who asked not to be identified.

And the north is gaining traction.

Tesla opened a factory in the northern state of Brandenburg in March, while Volkswagen – Germany’s only carmaker based in the north – is building a new battery factory to equip its electric vehicles in Lower Saxony.

Also in Lower Saxony, Belgium’s Tree Energy Solutions is planning to build a plant to produce hydrogen, initially making it from methane generated from food and other waste, and later splitting water via electrolysis powered by offshore wind.

Although Germany’s most prosperous districts remain in the south, the fastest developing ones are in the north and west, according to the IW economic research institute which ranks the country’s 400 districts based on factors ranging from tax returns to share of skilled workers.

“After decades of dominance by first the west then the south, now the north is getting going,” said IW’s Hanno Kempermann.

The power crisis may be helping tip the scales. Germany already needs to build more high-voltage interconnectors between the north and south, a requirement that will become increasingly pressing as more renewable power is generated in the north.

Bavarian premier Markus Soeder, whose state is home to some of Germany’s industrial leaders, has repeatedly said the federal government was not doing enough to protect Bavaria’s economy and has called for Germany’s last three nuclear power stations be kept running to ensure industry does not suffer.

The federal government in Berlin says Soeder has been slow to develop wind power in his own state.

The government had aimed to close its last power plants by the end of 2022 but adjusted the plan to keep two of them running into the spring. It still aims to exit nuclear power after that.

With Russian gas supplies dwindling, Germany is already at the second phase of a three-stage power emergency plan. The third stage would see electricity rationing for industry.

This month, Soeder appealed to Manuela Schwesig, premier of Mecklenburg-Vorpommern in the north, one of Germany’s poorest states, offering the services of Bavarian state employees to help accelerate the building of an LNG terminal to ease the power crisis that could hit Bavarian industry.

A Bavarian government official said, “Soeder visited Schwesig because there is a common interest in getting gas from north to the south.” – Rappler.com