LNG. A general view shows a construction site for a planned floating liquefied natural gas terminal in the harbor in Wilhelmshaven, Germany, August 16, 2022.

Europe and Russia have been locked in a standoff over energy supplies since Moscow invaded Ukraine and the West responded with sanctions. Russia, which previously met about 40% of Europe’s gas needs, has reduced flows citing equipment issues, while Berlin says Moscow wants to “blackmail” Europe.

Germany, Europe’s powerhouse economy that was more reliant than most on Russia, has been racing to find alternative sources of gas before winter in case Russia cuts supplies further or halts them. Berlin has already warned of possible gas rationing.

Under Tuesday’s memorandum of understanding (MOU) with Uniper, RWE, and EnBW’s VNG, two Floating Storage and Regasification Units (FSRUs) in Brunsbuettel and Wilhelmshaven will be fully supplied from their expected operational start this winter until March 2024.

German Economy Minister Robert Habeck said this was part of efforts “to make ourselves independent and less susceptible to blackmail from [Russian President Vladimir] Putin, and to give Germany a robust and resilient energy infrastructure, or in this case gas infrastructure.”

The floating units are a stopgap measure until Germany can build two permanent LNG terminals – the first such terminals to be built in the country – to receive gas shipped from around the world, instead of relying on Russian fuel supplied by pipeline.

The crisis sent Europe’s benchmark gas price to an all-time high of nearly 335 euros ($341) per megawatt hour in spring. They have since eased, trading around 223 euros on Tuesday, but remain far higher than a year ago when they were about 46 euros.

Gazprom, the Kremlin-controlled company with a monopoly on Russian gas exports by pipeline, said prices could spike a further 60% from current levels, imposing more pain on European consumers. It said they could exceed $4,000 per 1,000 cubic meters this winter, up from $2,500 now.

Uniper, which faced a financial crunch as it struggled to meet supply commitments amid rocketing gas prices, was bailed out by the German government in July with a 15-billion-euro deal. Berlin has also taken a 50% stake in the planned fixed LNG terminal at Brunsbuettel, co-owned by RWE and Gasunie. 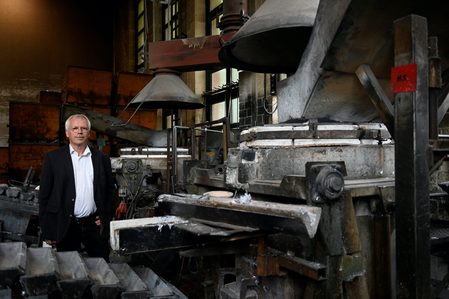 Before the crisis, Germany received much of its gas from Russia via the Nord Stream 1 pipeline, majority-owned by Gazprom. The pipeline had supplied 55 billion cubic meters (bcm) a year to Germany and others, but now runs at 20% capacity.

Moscow blames reduced flows on delayed repairs because of sanctions or faulty equipment. Berlin says these are pretexts to hit back at Europe in response to Western sanctions.

“The erratic actions of the Russian president, the pretexts [on Nord Stream 1]…I expect that we will again and again have to deal with new challenges,” Habeck said.

Using the two FSRUs, Germany will be able to receive up to 12.5 bcm of LNG a year, equivalent to about 13% of the country’s gas consumption in 2021, according to numbers from research firm Enerdata.

Uniper said it would buy 35% of the required gas volumes, while RWE and EnBW/VNG would contribute 35% and 30%, respectively. It said these were firm delivery commitments and that a firm contract would be signed by the end of September.

As well as limiting supplies via Nord Stream, Russian supplies pumped via Ukraine have also been reduced. Gazprom said its gas exports fell by more than a third to 78.5 bcm between January 1 and Monday, August 15, and production was down by 13.2% to 274.8 bcm compared to a year ago.

Global demand for LNG was already surging before the latest crisis as the world economy recovered from the COVID-19 pandemic, and Russia’s invasion of Ukraine has served to drive LNG demand higher still.

But Habeck said German gas importers had been successful so far in procuring LNG cargoes from the global market, which he put at 500 bcm a year, although talks between German importers and Qatar – a major LNG producer – have faltered.

Habeck said talks with Qatar were continuing but he also said importers were looking broadly for the best deals.

“And if Qatar does not make the cheapest offer, companies are well advised, in the interests of consumers, not to take the most expensive offer,” he said. – Rappler.com