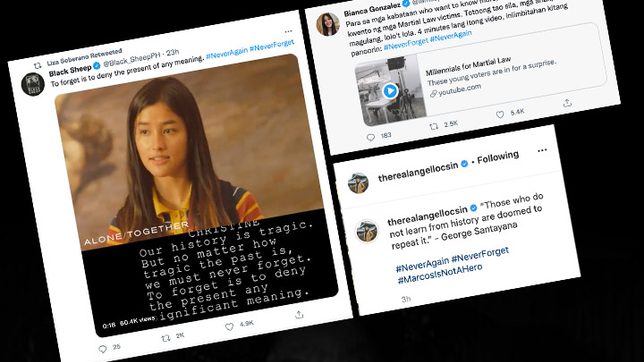 As the country marked the 49th anniversary Martial Law on Tuesday, September 21, several artists and celebrities were among those who spoke up to encourage people to remember the dark time in Philippine history.

Late dictator Ferdinand Marcos placed the Philippines under Martial Law on September 21, 1972 – the start of a nearly decade-long regime marked by humans rights abuses, media suppression, corruption, and the accumulation of government debt.

Among the prominent personalities that spoke out was TV host Bianca Gonzalez, who invited followers to watch a video where millennials meet Martial Law victims.

(For the youth who want to know more, the stories of Martial Law victims are not made up. They’re real people, children, siblings, parents, grandparents.)

Bianca earlier stressed her stance on the Marcoses when she spoke up on Toni Gonzaga’s interview with Bongbong Marcos.

In a tweet RT-ed by Liza Soberano, Black Sheep posted a clip of the actress from the film Alone/Together, where her character speaks about remembering the past, no matter how painful.

“To forget is to deny the present of any meaning. #NeverAgain #NeverForget,” they wrote.

On Instagram, Angel Locsin posted a collage of photos from the Martial Law era, including a photo of Boyet Mijares, the then 16-year-old son of Primitivo Mijares who authored The Conjugal Dictatorship, a tell-all on the Marcoses.

Locsin included a quote from philosopher George Santayana: “Those who do not learn from history are doomed to repeat it.”