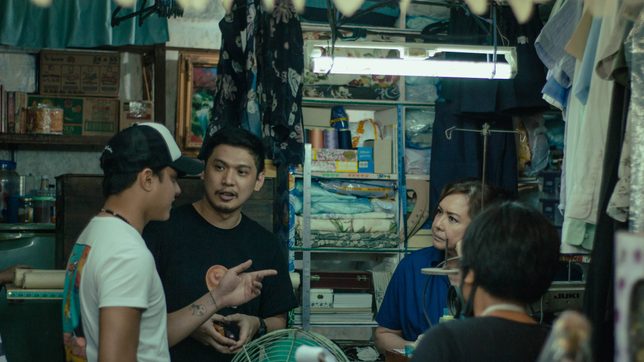 After being screened and lauded all over the world, Carlo Francisco Manatad’s film Kun Maupay Man It Panahon (Whether the Weather is Fine) is finally coming home to the Philippines, serving as an official entry to this year’s Metro Manila Film Festival.

Kun Maupay Man It Panahon tells the tale of Norma (Charo Santos-Concio) and her son Miguel (Daniel Padilla) as they struggle in the aftermath of Super Typhoon Yolanda – one of the worst disasters to have ever hit the country.

In a Rappler Talk Entertainment episode on Thursday, December 9, entertainment editor Marguerite de Leon chatted with Manatad and Santos-Concio about tackling such a huge and painful moment in recent history. Read the interview below. (Answers edited for brevity.)

Rappler to Carlo Manatad: What made you decide to do a movie on Yolanda?

Carlo Manatad: I was developing a film, and at first I felt like it was nearly complete, and then I realized it wasn’t. I felt there was something missing. And then Yolanda happened. I was looking for my family, and it came to the point where I was being haunted by all these things that were happening while I was roaming the city of Tacloban, and then I realized, going back to the film, that the thing that was really missing was me in it. I realized the reason why I couldn’t seem to finish my film was because I wasn’t in the material.

Rappler to Charo Santos-Concio: What made you decide to join this project?

Charo Santos-Concio: I was drawn to the story and to the character of Norma. She’s a woman who is very single-minded in looking for her lost dear one.

Rappler to Carlo Manatad: How involved were the Yolanda survivors in the production of the film?

Carlo Manatad: They were super involved even in the research part; even before production had started, they were already present. More than anything, I also wanted to shoot a few key scenes in Tacloban, since it’s also an ode to the people who survived the tragedy. I was so nervous, because in these scenes we had more than a thousand extras, most of whom had survived the storm, and I didn’t want to make them feel as if there’s this line of exploitation, where you’re exploiting their experience and just making it into something and not thinking about how they would feel. But they were just really happy to be part of this, that someone was telling their story.

Charo Santos-Concio: They were so kind. They were very, very cooperative.

Rappler to Charo Santos-Concio: What was it like trying to process that dark time in our history?

Charo Santos-Concio: When I was shown the script, which was in English, I was drawn to the character and said yes right away. But then I was told the whole film would actually be in Waray! When I started reading the Waray lines, I told myself, “Oh my gosh, what did I get myself into?” But I went through reading sessions, and was provided with a dialogue coach and a dialect coach. I love challenges and I always look forward to learning something new.

On the psychological side of the character, it’s really befriending the shadows of your character. What is really in your unconscious that you really need to discover?

Rappler to Carlo Manatad: What was your biggest challenge as a director?

Carlo Manatad: We had to mount a tragedy, and everything was from scratch. The scope was so huge and so many things were happening.

Rappler to Charo Santos-Concio: What was it like working with Daniel Padilla? Were there a lot of fans near the set?

Charo Santos-Concio: His fans were generally very behaved, but there would be times when they could get a bit rowdy, and there was one big scene in Tacloban where they were particularly noisy, and I think Carlo can tell you more about what happened.

Carlo Manatad: There was a very big scene that was very heavy and very emotional, but there were people screaming nearby because, of course, they were around big stars. Now, Daniel was really into the scene, so he took the microphone and started talking to the people, asking them to take the scene seriously, reminding them that this was their story, and to please respect the people who had died, and everyone just fell silent. Even I fell silent!

I hand-picked him but didn’t think he’d be able to take part in it. After meeting with me, I learned that he really wanted the role but wasn’t sure if he was the right person for it, if he could properly deliver the film’s message. It’s also a project that’s very different from what he does. But I’m glad he got onboard.

Rappler to Carlo Manatad: What’s the most common takeaway foreign viewers have gotten from the film?

Carlo Manatad: I’m so happy that the film is getting all this praise overseas, but the connection really falls upon when you screen it to the people who actually understand the situation and the culture. I feel like it’s a celebration of life, of how Filipinos go through these times.

Rappler to Charo Santos-Concio: When you finally saw the finished product, what thoughts were running through your head?

Charo Santos-Concio: It’s such a powerful film. This is not your usual mainstream movie. You have to be a committed moviegoer. It’s a story of survival, but of individual perspectives on survival. Each of us views survival through a different lens. Especially in the last 20 minutes of the film, I was stunned. It was so powerful. I want to watch it again. I feel like the second time I watch it, I will find more symbolisms, more meaning. If you want to appreciate filmmaking in its truest sense, this is a great experience. – Rappler.com