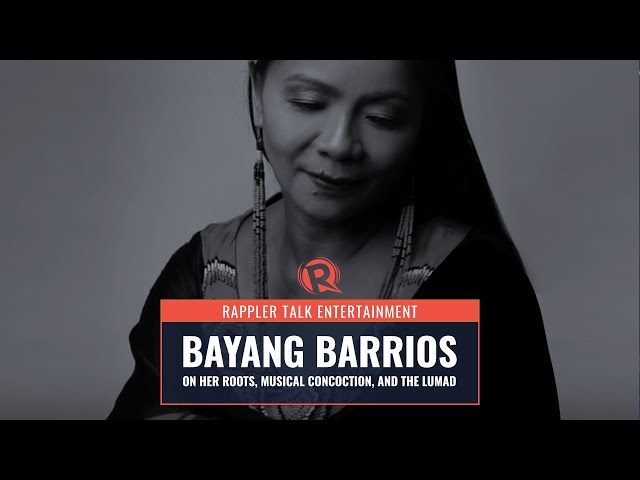 Facebook Twitter Copy URL
Copied
Toward the end of the interview, she grabs a guitar and belts out a tune!

CAGAYAN DE ORO CITY, Philippines – Multi-awarded singer and songwriter Bayang Barrios is known for a genre that fuses folk-pop music with the sounds and dance movements from Mindanao’s Lumad communities. The result is a unique concoction of rhythm, melody, instruments, and sights that pleases the senses just as it feeds the soul of listeners.

In this episode of Rappler Talk Entertainment, one of the icons of this sub-category of Filipino folk-pop music talks about her roots in Bunawan town in Agusan del Sur, her decades-old career, her musical influences, the plight of the indigenous peoples she seeks to represent through her music, and the red-tagging of the word “Lumad” itself.

Bayang also reveals that she was actually thinking of the environment when she did her famous war chant in Tadhana, the opening theme of GMA’s TV series Encantadia in 2016.

Toward the end of the interview, she grabs a guitar and belts out a tune.

Watch the interview with Bayang on Tuesday, September 6, at 6 pm. – Rappler.com