COWBOY BEBOP. The live-action adaptation is set to premiere on Netflix on November 19.

Space Cowboy, the long wait is nearly over!

In celebration of the one-month countdown before its premiere on November 19, Netflix released on Tuesday, October 19, a teaser for the Cowboy Bebop live-action series.

Directed by Greg Jardin, the two-and-a-half-minute video isn’t a preview of footage from the series, but rather a standalone episode featuring the key trio of Spike Spiegel (played by John Cho), Jet Black (Mustafa Shakir), and Faye Valentine (Daniella Pineda) in action.

The clip begins with the trio getting the call for a new bounty, followed by them running after the runaway target while exchanging snide remarks on how to best catch the enemy. It also teased the show’s main villain, Vicious (Alex Hassell).

Going by the teaser, the upcoming live-action series already promises to be a faithful adaptation of the hit anime. The teaser was titled the “Lost Session,” a reference to the original anime, where each episode was called a “session.” It also used a snippet of the song “Green Bird” which came from the “The Ballad of Fallen Angels” session of the anime.

The color-coded shifting frames wherein bars were properly utilized to separate the central trio as they continue to bicker back and forth captured the tone and style of the original Cowboy Bebop anime.

Set in 2071, Cowboy Bebop follows a team of bounty hunters led by Spike Spiegel, with crew members Jet Black, Faye Valentine, Radical Ed, and Ein the corgi as they scour the galaxy for dangerous criminals.

The 1988 anime was directed by Shinichiro Watanabe. It has inspired two manga series and an anime film released in 2001. The 26-episode animated series will be available on Netflix on October 21. 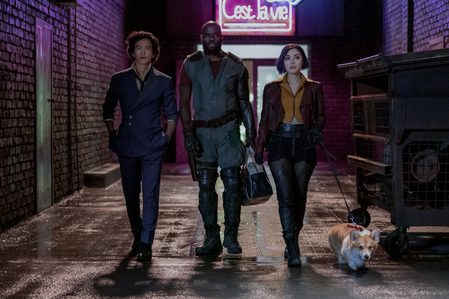 Netflix picked up the Cowboy Bebop live-action adaptation in 2018. Production started in 2019 but was paused after Cho sustained a knee injury on the set. It was also delayed due to the COVID-19 pandemic.

Cowboy Bebop is set to premiere on November 19. – Rappler.com

‘Cowboy Bebop’ anime coming to Netflix ahead of live-action series