Jul 11, 2021 8:44 AM PHT
Alois Isinika
Facebook Twitter Copy URL
Copied
'Whatever form of adobo you make is a valid form of adobo,' tweets a netizen

Filipinos online were quick to criticize the Department of Trade and Industry’s (DTI) proposal to “standardize” local cuisines such as adobo, sinigang, sisig, and lechon.

In a statement on Friday, July 9, the department said a technical committee on Filipino dishes began working on adobo standards in May, as they seek to develop a guide on how to cook the popular Filipino dish. 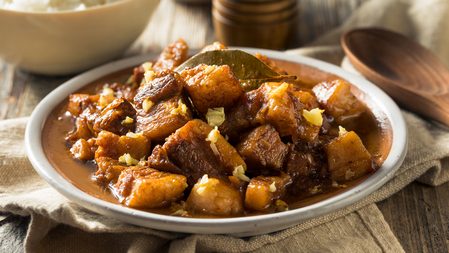 The proposal also involved documenting the “common way” to prepare the local dishes, as there are “various cooking methods published online by food writers, bloggers, and vloggers.”

This move, however, left a bitter taste in netizens’ mouths.

The flak came from netizens who said that the trade department must respect regional and cultural differences.

is there even a standard to begin with? although there are basics to it, there are tons of ways to cook adobo in every province. i’m not even sure if this is something the DTI should mess with.

But the differences in taste do not only occur among regions. Twitter user @is_it_right said even each household has its own version of the popular Filipino dish.

Is there really a “standard recipe” for each Filipino dish? Twitter user @GuchoPRMaven asked rhetorically.

The department also took a hit for the ill-timed standardization. Netizens argued that there were more important issues the trade department should be focusing on, especially as the country continues to grapple with COVID-19 and the economy has yet to fully recover from the continuous lockdowns.

Being under the national government, the department was not spared from particular jabs on social media.

Do we now need an “adobo czar?” Netizen Ruben Malabuyo suggested that the department might be hiring czars for each ulam (viand) soon.

Maybe the DTI could help us end the longstanding confusion among Pinoy dishes mechado, afritada, and caldereta?

Some also suggested that Filipino dishes should not be the ones held to a higher standard – but the Philippine government.

Netizens also took a jab at the recent controversy by Labor Secretary Silvestre Bello III, who said the need for licensure exams for certain professions is no longer needed.

Read more tweets on the issue below.

What are your thoughts on this? Share them in the comments and replies or join The Rappler Room on Facebook! – Rappler.com