In this picture taken on December 1, 2020, Japanese sushi master Toshiya Matsushita prepares sushi with fresh wasabi at his restaurant in Tokyo.

Facebook Twitter Copy URL
Copied
'Fresh wasabi not only masks the smell of the raw fish, but also heightens its flavor. It is spicy, but with sweet notes.'

If you’ve eaten sushi, you might assume you’ve tried wasabi. But chances are it was an artificial version that Japanese growers say is a world away from their ‘green gold’.

Unlike the spicy neon concoction familiar to many fans of Japanese cuisine – which is in fact made from horseradish – real wasabi is pale-green and offers a complex, mildly piquant flavor. 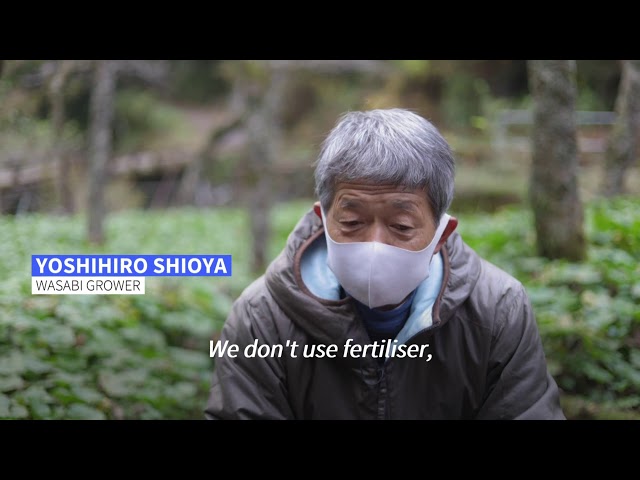 But even in Japan, it’s not common fare. That’s because the knobbly root is so difficult to grow, and consequently expensive to buy, with most of it snapped up by wholesalers.

“The most important requirement is crystal-clear water, in abundance,” Yoshihiro Shioya, 62, told AFP as he pulled a wasabi root from the sodden soil at his lush, green mountainside farm on Shizuoka province’s Izu peninsula.

“It’s absolutely necessary that the water temperature stays between 10 and 15 degrees Celsius, year-round,” added Shioya, whose family has cultivated wasabi in the region for 7 generations.

Patience is key – each wasabi crop can take a whole year or even 18 months to mature in the large man-made terraces, which serve a particular design purpose.

“The water flows down from the top of the mountain, which has terraces built into it covered with layers of pebbles and sand that filter and purify it,” explained Yasuaki Kohari, of Izu’s agricultural cooperative.

Wasabi shouldn’t just play a cameo in the kitchen… It can also take the leading role.

Once ready, the long roots, topped with a plume of round green leaves, are harvested by hand. The leaves are stripped off and the root, known as a rhizome, is carried away in baskets.

About half of the 550 tons of fresh wasabi grown in Japan last year came from Shizuoka, southwest of the capital Tokyo.

Wasabi grows naturally there and has been used in local cuisine for centuries.

Legend has it that it was especially loved and popularised by 17th century shogun Ieyasu Tokugawa, a military ruler who was one of the unifiers of Japan.

These days it is mostly purchased by high-end restaurants in Tokyo and Osaka.

‘Spicy, but with sweet notes’

Wasabi is prepared by grating the root, usually on a small square device with fine metal teeth or topped with coarse sharkskin – a process done almost immediately before consumption, as its piquancy fades after about 20 minutes.

Its spiciness is produced by a chemical called allyl isothiocyanate, which also gives mustard, radish and horseradish their pungency, and which scientists say has antibacterial properties.

It is usually served as a complement to raw fish, or alongside buckwheat soba noodles.

Toshiya Matsushita, a sushi chef at a restaurant in central Tokyo with a month-long waiting list, would never dream of using imitation wasabi.

“It feels powdery in your mouth and doesn’t have much flavor,” he said.

“Fresh wasabi not only masks the smell of the raw fish, but also heightens its flavor. It is spicy, but with sweet notes.”

But it doesn’t come cheap. He spends more than $700 a month on wasabi and uses one whole root a day, which he grates freshly for each order at his restaurant, Sushi Matsushita.

“The taste, the texture and the spiciness are different according to the way it is grated,” he said.

Not just a condiment

Despite its enthusiasts, wasabi remains largely the preserve of restaurants like Matsushita’s – but these have suffered along with the rest of the hospitality industry during the coronavirus pandemic.

So wasabi growers have been prompted to think of ways to expand their market.

Wholesalers have been selling their stock to supermarket chains, hoping to acquaint new customers with the taste of the unique product. But the high price continues to be a barrier, the farmer Shioya says.

Others, like Yamamoto Foods, around an hour’s drive from Shioya’s farm, offer wasabi-based products that go beyond the root’s status as a condiment.

“You can also eat the stalks, the flowers, the leaves. We use all the parts, so people can really get to know this delicious product,” said store manager Mayumi Yasumori.

The firm offers wasabi-infused olive oil, salt and mayonnaise, as well as shavings of wasabi to sprinkle on rice – and even wasabi-flavored ice cream.

“Wasabi shouldn’t just play a cameo in the kitchen,” said Yasumori. “It can also take the leading role.” – Rappler.com