Jan 14, 2012 8:12 AM PHT
Carmela Fonbuena
Facebook Twitter Copy URL
Copied
"We’re the social media capital of the world. Let’s use it for nation-building. Let’s use it to make our world better" -- Maria Ressa 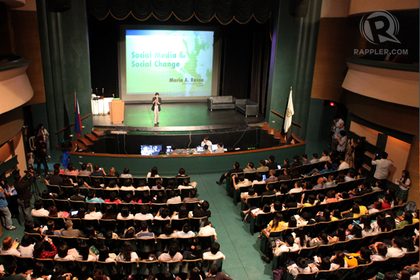 MANILA, Philippines – There are 27 million Filipinos on Facebook. There are 15 million households that own television sets. The question is: will social media gobble up television? And can it truly bring about social change?

Rappler CEO and executive editor Maria Ressa said that with rapidly changing technology, television could be a casualty.

“Why are we all talking about social media? Because of these really, really big numbers,” Rappler CEO and executive director Maria Ressa said.

“We know that traditional media is dying. Traditional media will no longer exist in the form you know it now,” Ressa, who was also former head of ABS-CBN news and current affairs, asserted during the “Social Media for Social Change” chat series held Thursday, January 12.

Rappler is a new player in online journalism that seeks to combine 1) professional journalism with 2) the wisdom of crowds—through social media—and 3) the power of technology to come up with reports that, Ressa said, will hopefully move people to positive action. These are Rappler’s three pillars.

Thursday’s chat series was the third organized by Move.PH, after Baguio in October and Davao in November. It served as Rappler’s first public unveiling. “Technology is shifting power away from the editors, the publishers, the establishment, the media elite. Now it’s the people who are taking control,” she said.

Ressa, for her part, said the source of social media’s power is its ability transmit and amplify emotions the way traditional media has not been able to.

Both Ressa and Pedrosa were impressed with what has been called the “Arab Spring,”  where social media played a role in the wave of protest movements that toppled dictators in the Middle East and North Africa.

It showed that with social media, people can decide to move together and act as groups. “We’re living in these cataclysmic times where your one post can change significant events around the world,” said Ressa.

What happens to the journalist? Rappler multimedia reporter Natashya Gutierrez showed participants how Rappler is trying to adapt to the challenges of social media.

Gutierrez showed how reporters can use smart phones with high definition cameras. “We have the tool to be first and to be fast. There’s that pressure because there’s that ability with the iPhone,” she said.

Rappler multimedia reporters are a one-man-team. They shoot videos, write text reports, write video scripts, and edit videos themselves. On top of these, they have to break and update stories on Twitter.

Videos, or images at least, are must-haves, too. This is one lesson that founders of Newsbreak, the investigative group, has learned. Newsbreak is now a section in Rappler.com.

“Another challenge is you have to be accurate,” said Gutierrez. “The minute you make a mistake on Twitter, the world will know about it,” she said.

But with social media, it’s not just scoops–breaking or investigative–that matter anymore. The rise of social media also means a change in the appetite of the consumers of news and information.

Ressa said the new challenge is: Who will first break the news and evoke emotions that will engage readers and viewers and, on a higher level, compel them to take action?

Like the Arab Spring, a moving story shared through social media is what it takes to change the world. A study shows that 80 percent of people’s decisions are based on emotions. Social media, on the other hand, amplifies emotions.

News, Citizen journalism and community engagement director Chay Hofileña saw how social media was effective in the dissemination of information during times of emergency. After the disaster in Northern Mindanao, Move.PH was able to curate from netizens’ contributions a directory of people that Filipinos across the country can contact if they want to help. Rappler Patricia Evangelista stressed the importance of people standing up for issues that matter to them.

“It’s not great revolutions or presidents or leaders who change the world. It’s imagination. It’s the power of a story to push a person to say, ‘That matters to me. I care,'” Evangelista said after showing moving video stories of the Maguindanao massacre and the Cagayan De Oro disaster to a teary-eyed crowd.

“We know the repercussions of keeping silent. That’s why we tell the story, because silence is consent. To see it and not to say anything that means you’re okay with that. That means that, that’s the sort of universe you want to live in,” she said.

In the Philippines, Hofileña cited as example the cyber bullying that targeted law student Christopher Lao, who complained about not being informed about flood levels. He became an overnight Internet laughing stock after a clip of his interview went viral.

Hofileña warned about the danger of carelessly posting anything online that can put one or even family members in vulnerable situations — especially in the “age of screen grabs.” Likewise, with constant updates via Twitter, for example, heavy users of social media can become desensitized to tragedy.

This is the downside of social media, said Ressa. Unfortunately, emotions are becoming increasingly negative in certain situations, she said. She cautioned participants against spreading anger and frustration.

There’s a need to rationalize emotions, said Ressa. Citing another study, Ressa said once people identify how they feel, they are better able to listen to reason.

This is the idea behind Rappler’s mood meter, one of the highlights of the site. Rappler visitors are encouraged to click on the corresponding emotion that the stories evoke.

In the grand scale of things, the mood meter seeks to define how Filipinos feel about critical events in the country’s life.

“By clicking on the mood meter, you allow yourself to be more rational…. [It] helps you define how you feel about something. Once you define it, you become more rational and we can start to talk about what the issues are,” Ressa said. – Rappler.com