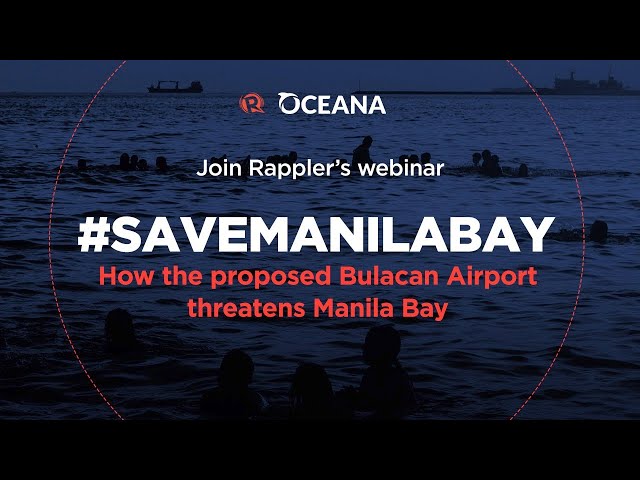 Advocates of the rehabilitation of Manila Bay questioned the push for an unsolicited airport project in Bulakan town, Bulacan, at a time when COVID-19 cases continue to rise in the country.

“In the era of a pandemic, there are so many airline companies laying off people. Why are they still continuing the Bulacan airport projectat the expense of our health, our environment, and the livelihoods of the people?” asked Gloria Estenzo Ramos, vice president of Oceana Philippines, in Filipino.

In Rappler’s webinar with Oceana Philippines released on Thursday, August 20, several advocates raised concerns about how the airport project would pose threats not only to communities in Bulacan but also the area’s ecology and environment – should it push through.

Effects on the community

This was echoed during the webinar by Fr Francis Cortez, spokesperson of the Bulacan Ecumenical Forum, a group of bishops, priests, and pastors directly coordinating with local government officials about the immediate concerns of the displaced communities in Taliptip.

If the project pushes through, 7 coastal sitios – with an estimated population of 1,102 – will be directly hit by the construction of the airport, according to the barangay office of Taliptip in Bulakan.

Cortez said that several residents displaced by the project do not know where they will be relocated, despite assurances that they will be given homes and livelihood.

(There were no independent talks or assessment done regarding this…. Residents are also unaware of what will happen to them once they’re transferred.)

Some, meanwhile, were left with no choice but to demolish their own homes to make way for the airport project during the pandemic.

Back in June, the Save Taliptip movement reported that San Miguel Corporation, the company handling the airport project, allegedly offered residents P250,000 in exchange for the self-demolition of their houses. The different threats that exist in the area

Aside from encroaching on coastal communities in Manila Bay, the ambitious airport project rests in an area identified to have high susceptibility to storm surge hazards, according to Narod Eco, a researcher at the Marine Science Institute of the University of the Philippines Diliman.

Eco warned that should a typhoon as strong as Yolanda strike the area, at least 2 to 4 meter-high storm surges can hit coastal communities in Manila Bay, including the planned airport.

Eco added that the estimate doesn’t account for the storm waves that will ride on top of the surge, which could inundate more areas.

Storm surges in Manila Bay are not new. Eco cited instances of ships running aground in Roxas Boulevard due to coastal floods from as far back as 1970.

Aside from storm surges, the airport project is vulnerable to existing geohazards in the area, including rapid land subsidence, flooding, and enhanced ground shaking, according to Eco.

He explained how these threats are exacerbated by manmade projects, citing an instance in October 2015 when floodwaters brought by Typhoon Lando struggled to course along Hagonoy River, among other water streams, and onto Manila Bay, due to obstructions to delineate fish ponds.

(This is one example of how human activities can change and worsen natural processes, and how they come back to us. We’re the ones who will ultimately struggle. It’s even worse for the people who live there.)

The airport project is only one of at least 22 approved and proposed reclamation projects in Manila Bay.

Manila Bay is highly susceptible to liquefaction, according to data from HazardHunterPH, an application of the Philippine Institute of Volcanology and Seismology (Phivolcs) that summarizes hazards in a user’s chosen location.

Despite these hazards, a recent Manila Bulletin report quoted Environment Undersecretary Benny Antiporda as saying that while an environmental compliance certificate has been secured for the land development of the airport project’s area, a separate environmental permit for the “structure” of the airport has yet to be secured.

Eco questioned why the project is pushing through when it could possibly bring danger to communities.

(For whom is this development? These reclamation projects’ objective is to set up commercial and residential spaces which will bring people there. Now, there are so many hazards there, which means the project is bringing people to a dangerous area.)

Cortez said that instead of constructing a new airport and displacing residents, one can opt to improve the Clark International Airport, or look at other options.

“If you take it into consideration, rehabilitating the mangrove forest looks more sustainable than spending on the infrastructure needed for that project,” Eco said in Filipino.

The need to act

He called for a ban on reclamation projects in Manila Bay, suggesting that government instead direct support to improving research and monitoring of Manila Bay to ensure policies involving the area are evidence-based and science-based.

Oceana’s Ramos urged government agencies and local government units not to be “bystanders” as the groundbreaking for the unsolicited airport project nears.

She said there are several laws that put the responsibility of protecting the environment on these agencies. For example, there is a mandamus issued by the Supreme Court in a landmark decision in 2008 that ordered 13 government agencies to “clean up, rehabilitate, and preserve Manila Bay.”

“I appeal to all our government agencies: Just please do your job. The pandemic should give us time to reflect in the long-term; food security is so important. Let’s build the resiliency of our natural life support systems because we will rely on them when things get worse,” Ramos said in a mix of English and Filipino. – Rappler.com