As cycling booms during pandemic, advocates pedal toward sustainable transport As more and more people turn to cycling during the pandemic, Metro Manila roads have been transformed to fit the “new normal” as shown by the presence of more bike lanes.

The Department of Transportation (DOTr) also recently announced that it secured P1.3-billion funding for the installation of a bike lane network in Metro Manila, Cebu, and Davao as part of its pandemic recovery plan. This will be funded under the Bayanihan to Recover As One Act.

Prior to the pandemic, cyclists complained about the lack of infrastructure for their community.

“Cycling pre-pandemic was a challenge,” said Keisha Mayuga, an environmental planner and cycling advocate who founded Life Cycles PH, a community-led initiative that pairs institutions with bike donors and advocates.

Before the pandemic, Mayuga was among the few who traveled on two wheels, braving rough pavements and speeding vehicles in the absence of bike lanes in many areas.

Aside from serving as avenues for community support and providing cycling education through online talks and workshops, citizen-led groups are also paving the way for the creation of safer infrastructure for cyclists, especially during the pandemic.

The COVID-19 pandemic has also sparked the urgency for a cycle-friendly Metro Manila as operations of public utility vehicles continue to be limited. This has pushed many to turn to cycling so they can make their way around the city.

“More groups and individuals [are] clamoring for better infrastructure,” Keisha said on the rise of the bike culture in Metro Manila.

Among those spearheading the movement for safe infrastructure are Alt Mobility PH, Move As One Coalition, and Cycling Matters – community-led initiatives that push for stronger policies for a sustainable and inclusive public transport system.

Alt Mobility PH has collaborated with the Department of Health, Department of the Interior and Local Government, DOTr, and Department of Public Works and Highways in drafting guidelines on the proper use and promotion of active transport during and after the COVID-19 pandemic.

The group is also lobbying for the Magna Carta of Commuters, working with Move As One Coalition on crafting a mobility package in response to the pandemic, and collaborating with the Chevening Foundation and the British Embassy in organizing active transport workshops and seminars across the country in 2021.

While these are in the works, transport economist and Alt Mobility PH co-founder Jedd Ugay said that more can also be done to instill rider education and road etiquette in road users.

“[We] need to prioritize the transport mode of the majority of Filipinos to achieve sustainable and inclusive mobility…. We should do away with our current car-centric mindset,” he said.

The socially and environmentally sound approach

Emphasizing how only a small percentage of Filipinos can afford a car, Ugay noted how the gaps in public transport at the onset of the pandemic showed the need to push for better solutions toward inclusive mobility.

According to a 2015 study of the Japan International Cooperation Agency, only 11.5% of Metro Manila households own a car. This means that most Filipinos are dependent on public transport and active transport like walking and biking.

With biking being so accessible, Ugay said that the Philippines will need a large network of protected bike lanes and improved public transport infrastructure.

Looking at the Philippines’ transport system, Ugay said that the government should also explore service contracting with PUV operators, an agreement that will ensure that drivers will be paid a stable income independent of ridership, especially in the context of COVID-19 where capacity is greatly reduced.

Aside from the cost and health benefits of biking, it is also pro-climate. According to a 2014 study published on the peer-reviewed Energy Policy journal, biking will save a lot of carbon dioxide emissions – which contribute to global warming – compared to using a car.

The study explained that carbon dioxide emissions from Metro Manila’s road passenger transport sector will increase up to 27.90 million tons in 2040 based on the business-as-usual scenario.

A report that appeared on the United Nations Environment Programme website said that “switching from a car to a bicycle saves 150 [grams] of CO2 per kilometer” and that “each 7 km by bicycle will save an emission of 1 kilogram of CO2 as compared to the same distance covered by car.”

This means that if 1,000 people switch to bicycles from cars and travel at least 7 kilometers a day, 1,000 kg of carbon dioxide emissions can be saved daily.

Moreover, a study published by Greenpeace Southeast ASia and the Centre for Research on Energy and Clean Air (CRA) in February 2020 an estimated 27,000 premature deaths in the Philippines per year is attributed to air pollution from fossil fuels. Cycling, in comparison, causes virtually no environmental damage and takes up less space. It is also more economical in user and public infrastructure costs.

Inclusive planning for a sustainable future

As more and more engage in cycling and with the push for bike-friendly cities, Manila-based urban planner April Valle encouraged local governments to consider the perspectives of citizens, and amend planning processes to allow the permanent adoption of successful citizen-led initiatives. 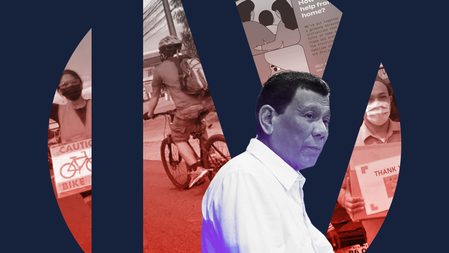 “During the lockdown, there were many examples of tactical urbanism: citizen-led approaches that are often small-scale, easy to implement, and usually low-cost…. In light of new requirements for physical distancing, we are forced to reenvision our use of spaces and these initiatives can help us to identify strategies that would work,” Valle said.

She cited examples like pop-up bicycle lanes, and community vegetable gardens as some ways to push for a more sustainable future.

“Everyone can contribute to sustainability by adopting habits that are good for the environment and our well-being. Some of these good practices were nurtured during the lockdowns, and we must start conversations about how we can change our lifestyles so that we can retain these practices even after,” said Valle.

From policymakers and traffic enforcers to its citizens, the road to a cycle-friendly Metro Manila is a community effort. While mobility advocates’ movements continue to be on the move, Valle emphasized how government plays a big role in including them in the conversation and working with them to achieve sustainable transport and cities.

“Equal opportunities for children, people with disabilities, and the elderly to contribute [to] the conversation will result in solutions that are more inclusive for the community,” she said.

“By engaging citizens, a greater understanding of issues is achieved, leading to projects that are aligned with the community’s needs,” Valle added. – Rappler.com